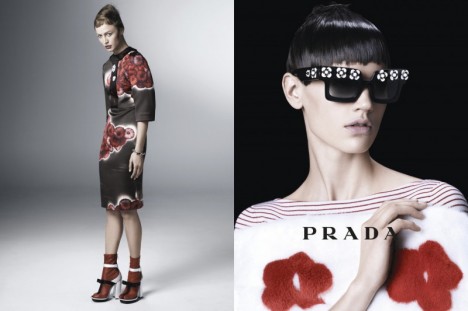 The images feature some highlights from the ready-to-wear collection shown in Milan this September, alongside some examples of Prada’s famous leather accessories. Spring shoes come either pointed and flat or squared-toe and platformed. After the previous season’s busy 1970s-style prints and colorful exuberance, this new campaign has settled into a quieter aesthetic. One of the stars of the campaign, 31-year-old Dutchwoman Saskia de Brauw ,is the veritable model of the moment. Hedi Slimane has just shot her as the face of his Saint Laurent 2013 menswear images, while she has appeared in recent adverts for luxury labels Max Mara, Givenchy and Chanel as well as fast-fashion giant Zara. Valletta has gone on to a career in cinema (film buffs will know her from her starring role in “Hitch” alongside Will Smith), and appears in the new images wearing a black dress with a white flower and Japanese-style high-heeled sandals.