Emilio Pucci is honoring the jetset vacation spots of Saint-Tropez, Portofino and Capri with its latest collection of silk summer scarves. 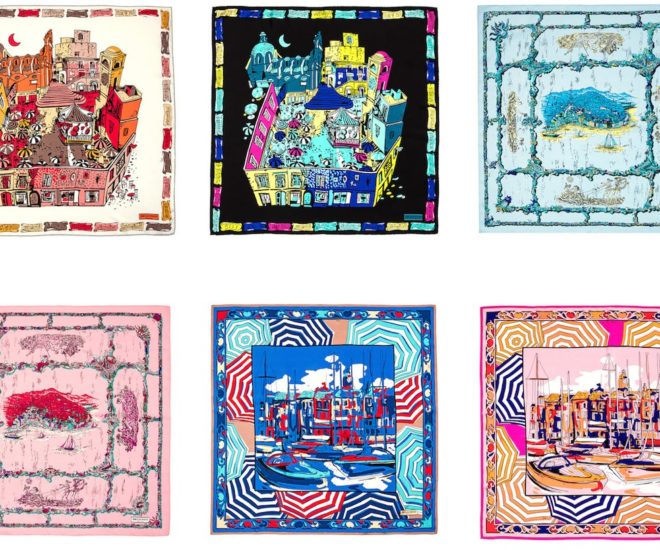 Italian fashion house Emilio Pucci is honoring the jetset vacation spots of Saint-Tropez, Portofino and Capri with its latest collection of silk summer scarves. The Mediterranean hotspots have been added to the Italian fashion house’s ‘Cities of the World’ collection for summer 2016. Each scarf features a hand-painted illustration of the towns’ landscapes and characteristics, reproduced in postcard hues. Scarves of course are a major component of the Pucci fashion legend.

The Saint-Tropez scarf, a brand new design, is full of bright colors evoking the artistic spirit and sophisticated atmosphere of the famous resort. A series of striped umbrellas overlap nonchalantly around the central illustration, which depicts the town’s harbor, lined with shops and dotted with sailboat masts, on a sunny afternoon. The colors include bright vivid blues and reds, as well as the signature Pucci pink and orange combination.

The Portofino scarf, adapted from a 1950s design from the house’s archives, features motifs recalling the reputation of the city as a major seaport. Sailboats and sea creatures both real and mystical are arranged around the central illustration of the city’s magnificent views. Deep blue and green form the basis for the color chart, punctuated with yellow and bright pink accents.

The Capri design, also a revival of an archive piece, recalls the dynamism of the lively resort where Emilio Pucci opened his first boutique in 1951. The buzzing central piazetta takes the lead role, alongside the church of Santo Stefano and the majestic clock tower, all drawn from a bird’s perspective. Sheet music motifs accentuate the warm and cheerful idyllic island atmosphere, and two versions are available — a black scarf, punctuated by electric blue, pink and yellow, or a white scarf accented with yellow and orange red.

The trio joins the nine cities previously included in the collection, which was launched in 2014. Former destinations include Florence, Rome, Milan, London, Paris, Tokyo, Shanghai, Hong Kong and New York.

Crafted from fine silk twill and printed in Como’s celebrated silk district, the scarves are available from emiliopucci.com or in Emilio Pucci boutiques.