Why settle for something rare when you can splash out and create something that is uniquely yours. 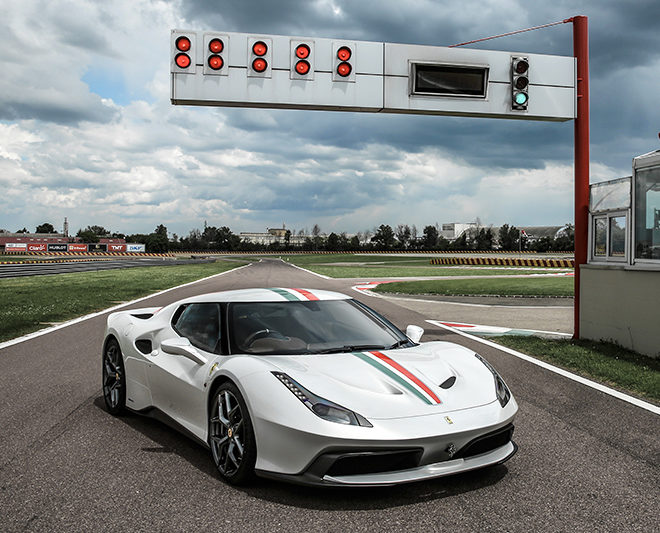 The Ferrari 458 Speciale was distinctive when it was first released in 2013, which is only fitting for what is a souped-up version of the 2009 Ferrari 458 Italia. All versions of the 458 were phased out in 2015 so if you get one brand new today, you can count yourself extremely fortunate. For one mysterious British customer though, a rare car just wouldn’t cut it. Thus, the 458 MM Speciale was born. The bespoke Ferrari made its debut on Tuesday during a shakedown testing on the Fiorano circuit. The one-of-a-kind creation has a few similarities other 458s, with a few unique features in the mix. Like the collectible 458 Speciale, the bespoke Ferrari boasts a 4.5 litre 600 hp V8 engine and can go from 0 to 100km/h in three seconds on its way to hitting a top speed that exceeds 200mph. The differences begin with the exterior that is re-sculpted in aluminum and carbon fibre composites while also featuring side air scoops as well as a re-worked nose and tail. The custom Ferrari that was designed in-house by the Ferrari Styling Centre showcases sporty lines —a request of the client— as well as a glasshouse that resembles the 1984 Ferrari GTO. This wraparound solution sees the windscreen and side windows become one seamless glass surface while also lowering the roofline. The roofline joins the side scoops in adding to the aerodynamic revision of the new car. Thanks to the unique additions, Ferrari could afford to modify the car further by having the cooling radiators mounted closer together. With the help of the side scoops, the car is able to provide direct additional cooling to the engine. The downforce is evenly balanced thanks to a spoiler on the tail — something that you would not find on current production Ferraris. The customization of the car doesn’t stop there: the owner also requested specific wheels that are exclusive to the car along with an upgraded audio system as well as Ciccolato leather upholstery with white stitching and satin white rings around the tunnel controls.