A luxury safari camping experience that overlooks the floodplains of Botswana has snagged the lofty title of world’s best hotel by readers of Travel + Leisure magazine. 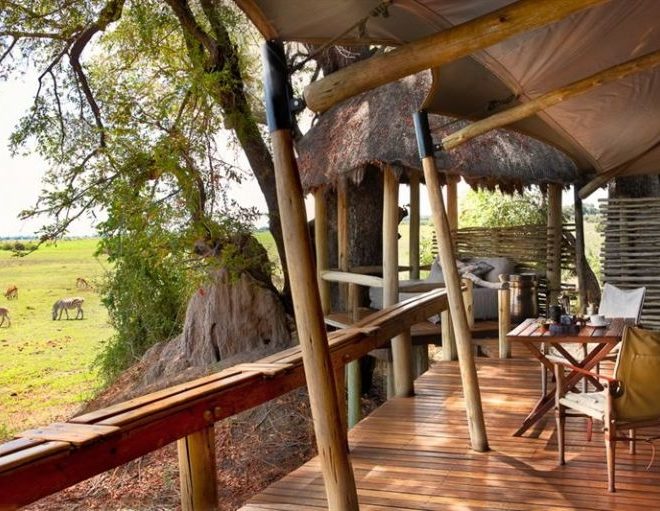 One of of Mombo’s best-selling assets: a location set within the Moremi Game Reserve which provides one of the best big game viewing vantage points in Africa, say camp operators.

Guests sleep in plush, four-poster beds, have access to both indoor and outdoor showers, and can live peaceably among rhinos, elephants, and game animals which roam freely under their feet beneath raised walkways that connect the private tents to one another.

Other amenities include thatch-roofed living and dining areas as well as a plunge pool. Morning and afternoon game drives also offer frequent sightings of lions, leopards, buffalo, giraffe and zebras.

In addition to offering luxury accommodations in the middle of the African plains, guests can sleep guilt-free as Mombo is powered completely by solar energy. The camp also implemented a rhino conservation project which reintroduced black and white rhinos to the region.

For these and other reasons, readers gave the luxury camp site a top score of 96.6 out of 100.

Meanwhile, though properties listed represent nearly every corner of the world, luxury chains such as the Four Seasons, the Ritz-Carlton, Fairmont, the Mandarin Oriental and The Peninsula make repeat appearances throughout the ranking.