Meet the new fastest production car in the world

After hitting 427.5km/h, the Hennessey Venom GT is said to be the fastest production car in the world. 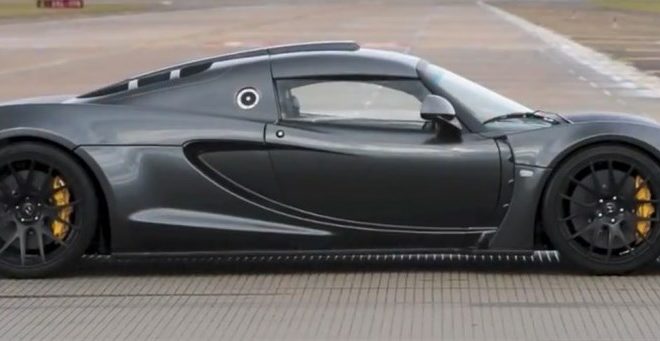 American supercar the Hennessey Venom GT has hit 265.7mph (427.6kph) to beat the Bugatti Veyron’s existing record on a technicality to steal the top speed crown.

The technicality in question is engine tuning. A standard production version of the Hennessey Venom GT managed to come close to 270mph along a 2.9 mile stretch of runway whereas the Bugatti Veyron Super Sport, using Volkswagen’s 5-mile+ straight, got closer still, hitting 267.8 mph (431kph).

After setting its record, the production version of the car had its engine slightly detuned so that its top speed would be limited to a mere 258mph in order to guarantee the tires don’t disintegrate.

The Hennessey Venom GT was tested in February but the figures have only now been ratified. The car, which is loosely based on the Lotus Exige, is powered by a twin turbo-charged 7.0-liter V-8 engine.

It pumps out 1244 horespower and, as the car weighs exactily 1244kg, its power to weight ratio is 1000 horsepower per tonne.

In February of 2013, the Venom GT officially became the quickest accelerating production vehicle in the world as it ran 0-300 km/h in 13.63 seconds, thus establishing a new Guinness World Record.

Only 29 Venom GTs are scheduled to be built and each will cost their lucky owner $1.2 million plus shipping, not including options. Hennessey claims that the first 10 have already been sold.