What do you call a car with no dashboard or mirrors? Meet the McLaren 675LT JVC Kenwood Concept, currently drawing crowds at CES. 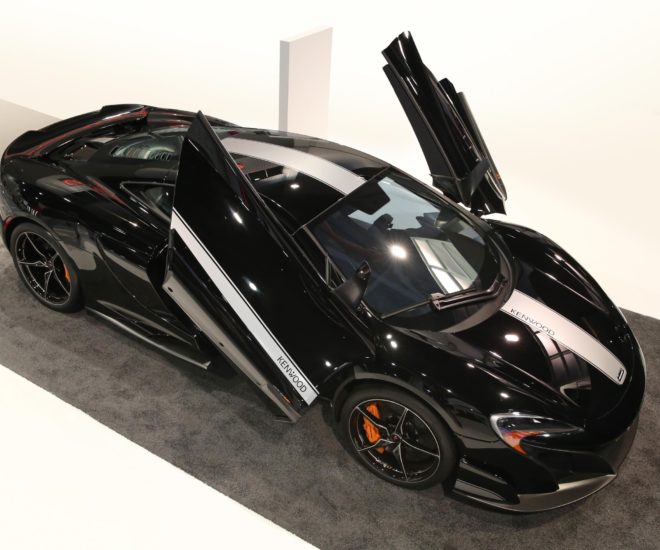 What do you call a car with no dashboard or mirrors? Meet the McLaren 675LT JVC Kenwood Concept, currently drawing crowds at CES in Las Vegas. The British supercar maker typically focuses tightly on squeezing horsepower out of its engines and making its dream machines stick to the road and track; finally, its cockpits and in-car technology up to speed.

However, that doesn’t mean that the McLaren 675LT JVC Kenwood Concept is packed with 4k widescreen displays and its own Netflix account. Sadly, it also comes without a drone, which other carmakers have pushed out at CES but we digress.

If anything the supercar is a high-tech filter, sifting out all of the elements of next-generation infotainment and connectivity that could potentially detract, rather than enhance, the experience of owning a car capable of going from 0-100km/h in 2.9 seconds and tops out at an incredible 330km/h (205mph). Elsewhere at CES, the 1,000 horses of the Faraday Future concept car were heard crying as they were told the news of the McLaren Concept… Back to business… On first glance, the cabin of the 675LT seems even barer than that of a standard McLaren. There’s no instrument binnacle or center console. Instead the concept is the first McLaren to sport a Head Up Display (HUD) and it shows all relevant information including proximity warnings when other vehicles or obstacles are in blind spots. Basically, for those unfamiliar with HUD, the windscreen is the display console.

Gone too are the wing mirrors, in favor of cameras that offer a better view along the car’s sides and improve performance too, as they’re more aerodynamic. Their blade shape also means that when the car’s pushed to its limit they will help to generate more downforce keeping the vehicle glued to the road rather than dumped in a roadside ditch.

The rearview mirror has been discarded too thanks to an integrated rear reversing camera. And with three cameras covering every aspect of the vehicle behind the driver, the view offered is a true panorama and something just as useful when racing on the track as when trying to negotiate a carpark. Speaking of the track, this concept is equipped with the steering wheel of the P1 GTR. McLaren chose to work with JVC Kenwood on the concept to mark the firms’ 25th anniversary of collaborating in Formula 1, and, as well as boosting the car’s tech capabilities, the changes have also enabled the companies to get creative in terms of cabin appointments and materials.

With so many objects jettisoned, there is space for more layers of leather that run along the transmission tunnel and wrap over the top of the dashboard. The surfaces in front of the driver have been given a waxy grain finish to eliminate potential reflections, crucial when all information is being projected onto the windshield.

However, outside, with the exception of blade-shaped digital cameras in place of traditional door-mounted mirrors, the exterior remains untouched. Now, if you’ve read this far, you might wonder why these innovations are not part of regular production cars anyway. Simply put, most of this is not road-legal anywhere but the regulations will eventually catch up, we hope. The HUD, which is already included in production vehicles from the likes of BMW, Audi, Mercedes, General Motors and many more, in particular seems like an idea whose time has come. HUD should be the standard rather than a luxury option.