Not since Porsche redefined the SUV with the Cayenne for the luxury market has another marquee gained quite as much attention as the Bentley Bentayga. 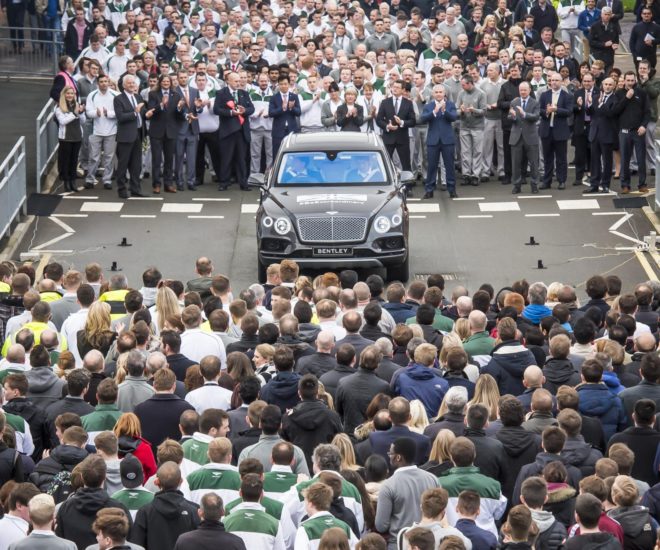 Not since Porsche redefined the SUV with the Cayenne for the luxury market has another marquee gained quite as much attention as the Bentley Bentayga. Now it finally gets real, with the first Bentayga rolling off the production line in Crewe, England. After four years of conceptualizing, design and development the first real-world example of the world’s most powerful and most luxurious SUV is now a reality.

The occasion was marked with a special event at Bentley’s plant in Crewe, last week attended by the UK Prime Minister.

“Bentley Bentayga will be the benchmark against which all other SUVs are measured, defining a new segment — the luxury SUV,” said Wolfgang Dürheimer, Chairman and Chief Executive of Bentley Motors. “This is an important moment in our history, where we reflect and celebrate, but also look ahead to delivering this extraordinary car to our customers.”

If nothing else, this tells the world what Bentley thinks of other luxury SUVs – not much. Interestingly, reports indicate that the Bentayga, like the Cayenne, is built on the

The Bentayga is a bold step for a company more closely associated with luxury GT cars and limousines, but demand for performance, exclusivity and supreme luxury at the highest end of the SUV market has never been greater. Hence the new car boasts a twin-turbo W12 engine capable of delivering 600hp and a 0-100km/h time of 4 seconds as well as a cabin awash with the finest wood and leather.

“I am delighted that the first Bentley Bentayga has rolled off the production line in Crewe. It marks the culmination of a period of exceptional hard work by Bentley and its dedicated workforce as they brought this remarkable new vehicle to market,” UK Prime Minister David Cameron, said.

Unfortunately, the first completed model is not heading to a client, it will be going straight to the Bentley Heritage centre for preservation.