Elite Days Away: Summer in Italy

Escape to the most coveted travel destinations and experiences with Travel Writer, Joy Greedy. 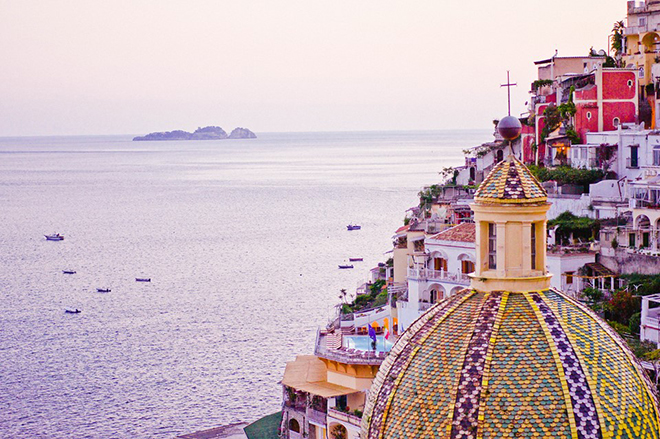 For most, travelling is an excuse for overindulgence and where better to overindulge than mid-summer in Italy.

“How beautiful to do nothing and rest afterwards” Italian proverb

If you are going to drive the Almalfi coast, my advice is to take a limousine with an entertaining driver, preferably one that does not talk with both his hands!

The road leading to the Amalfi coast, and Positano, our destination, is steep and narrow with breathtaking views of the Tyrrhenian resort. 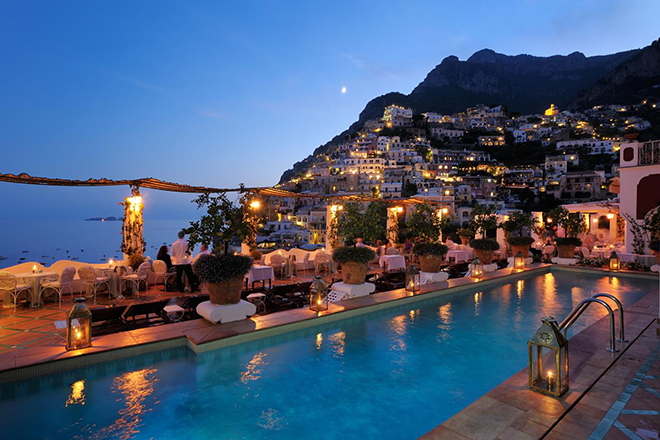 Arriving on a warm current of air, we gaze up at the terraced mountainside with its profusion of pastel coloured villas and burgeoning bougainvillaea – the gem of the Amalfi coast. Against a clear blue sky, we witness what will be the first of numerous performances of fireworks. Our chauffeur, with the coin worthy profile, tells us it is the festival of Ferragosto and the busiest time of the year in Positano. 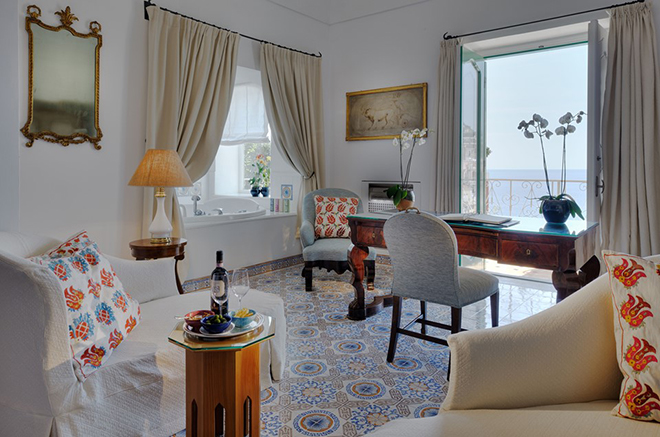 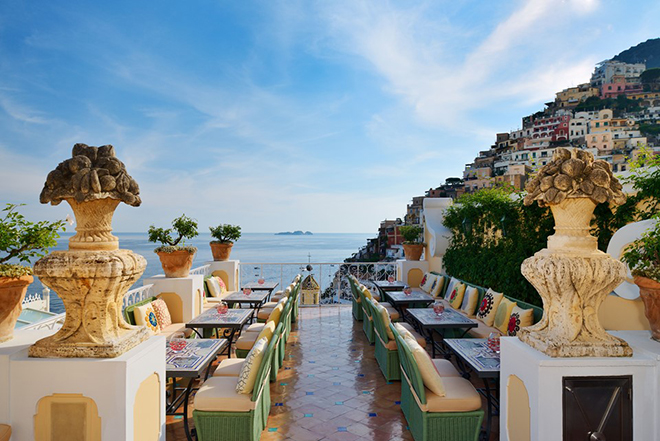 Hotel Le Sirenuse is the jewel in the centre of Positano. Overlooking the beach and the green-scaled dome of the town’s impressive cathedral, the 18th-century villa was the summer residence of the Sersale family, nobilta Napolitana.  Today, it is still owned and run by the family of the Marchesi Sersale, retaining all the charm and atmosphere of a family home.  The suites, all different, are filled with precious family heirlooms and authentic antiques. 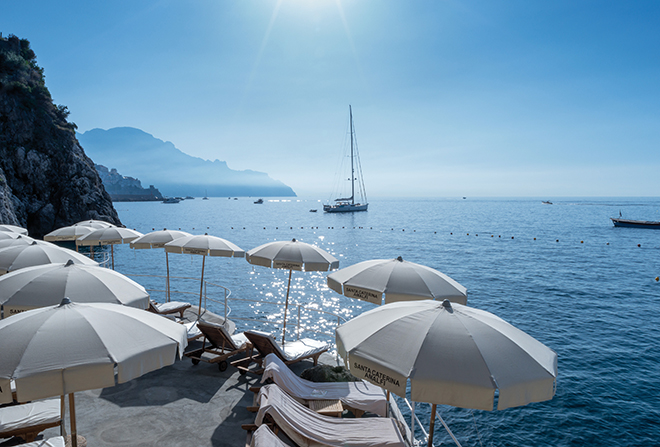 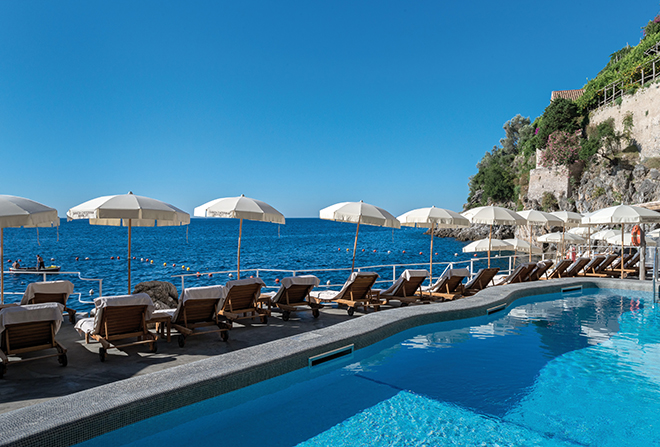 I throw open the jade green shutters to reveal the placid blue sea, and the postcard-perfect village climbing the hills.  The church bells chime and the joyful voices of the congregation rise and echo throughout the town. The voices blend with the laughter of children playing on the beach, so carefree in anyone’s language. The town’s Brass band, playing enthusiastically as they go, commences its downward march, starting from the mountaintop it makes its way slowly down the hill! 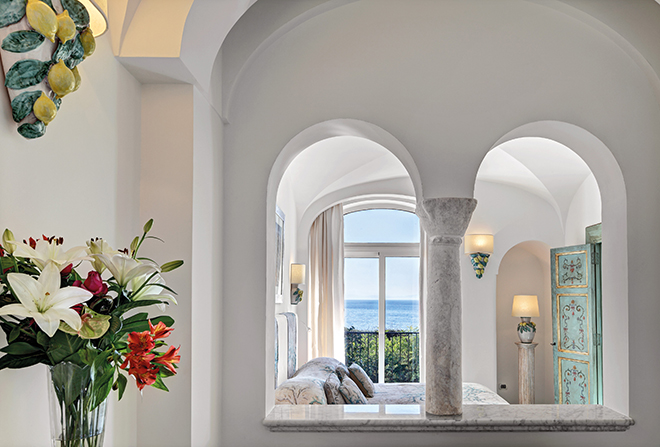 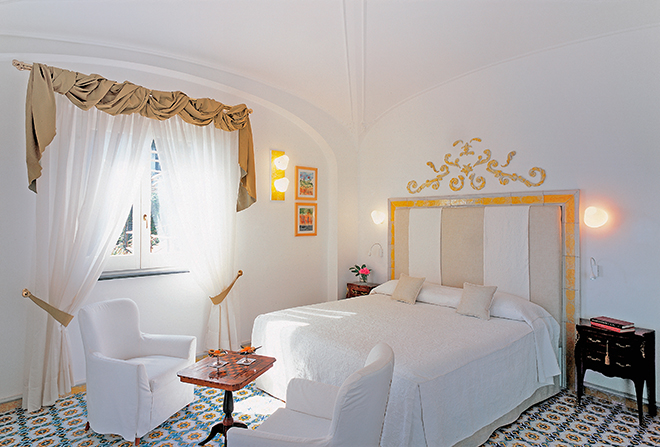 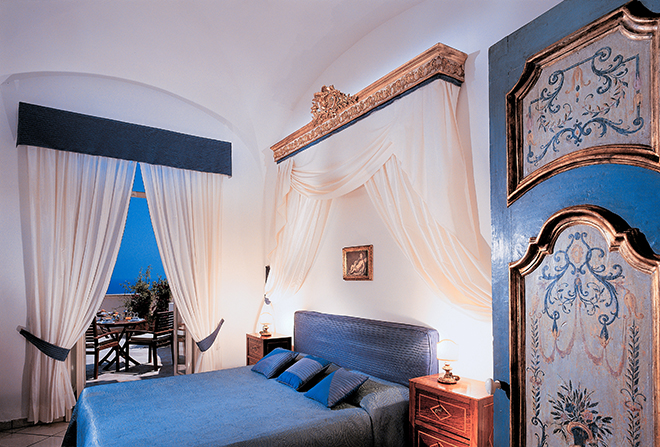 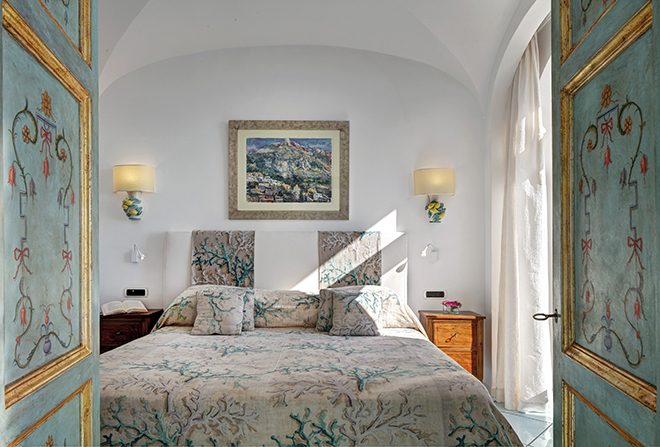 A joyful din rises from the beach, as we sip complementary champagne on our patio, watching the never-ending opera of ferries coming and going to the Isle of Capri. 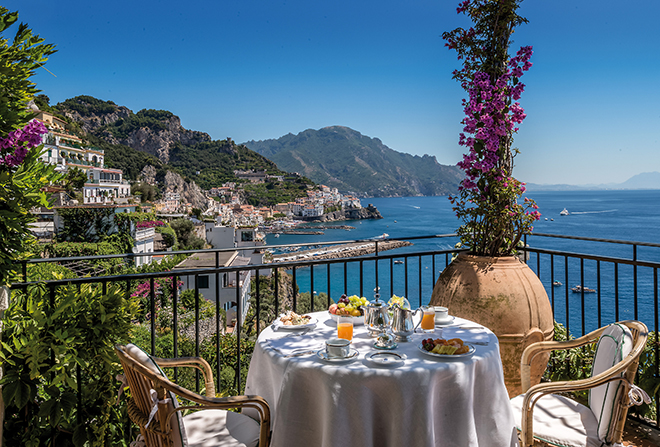 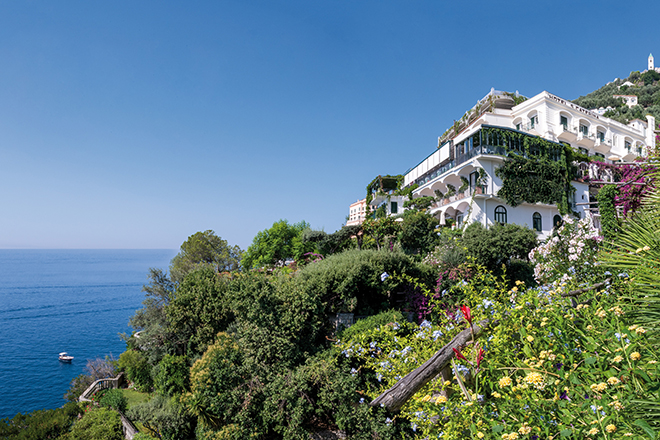 Later that evening we dined on the pool terrace, lit by candles and scented with rose and jasmine, the tables divided by lemon trees.  When I asked the waiter, following dinner, for mint tea, he whipped out a pair of scissors and cut the herb straight from the flower pot. The view from the pool terrace is stunning, framed through bougainvillaea covered arches; the lights of Positano beckon you like the bewitching Sirens of the Sea. 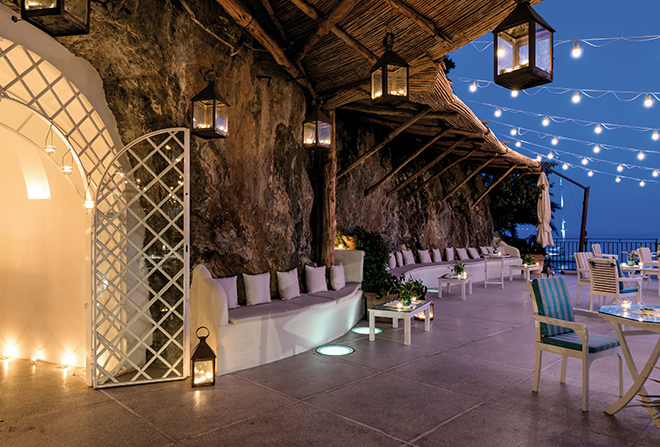 Early the following morning we set off to explore Positano and the surrounding coast. The stairs, leading into town are steep, narrow, and well worn in places. At this, time of the year, adding to the festive atmosphere, the beach area and shops are extremely crowded.  Flamboyant artists en masse, theatrically apply the last brush stroke to their masterpieces, tempting you to buy. The shops are buzzing with tourists’ parting with the last of their holiday euros. On sale are ceramics, souvenirs, leather goods, and fashions in the distinctive ‘Positano style’.

If shopping is not your thing, Le Sirenuse offers the use of their private yacht, complete with chilled wine and a picnic lunch, to guests for day trips. Otherwise, Positano is served by Hydrofoil to Naples, Sorrento and Salerno.  This is a more reliable option at this time of the year as bus timetables seem to be written in sand. 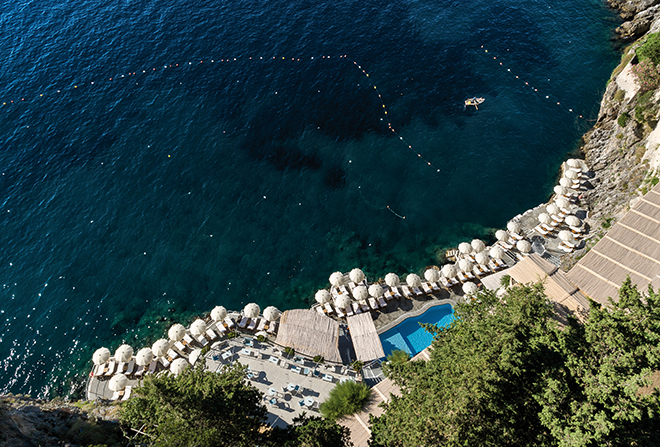 The pier is abuzz with day-trippers waiting for ferries to Amalfi, Ravello and the Isle of Capri, as well as numerous seafood restaurants located along the coast.

Le Sirenuse guests, however, seemed to prefer lounging by the pool, (another famous location featured in the movie “Only You”) sipping cocktails and gorging on big, fat, green olives, rising only to indulge their senses in the glass and teak, world-class spa.

Yet again that evening, we are treated to another display of fireworks with more promised at midnight. We dined under the stars, the church bells ringing after another jubilant mass. The Champagne & Oyster Bar, perched above the pool, offers a spectacular view out over the ocean where you can savour oysters, caviar and overindulge as we did, with Limoncello and its equally debauched companion Nocino. 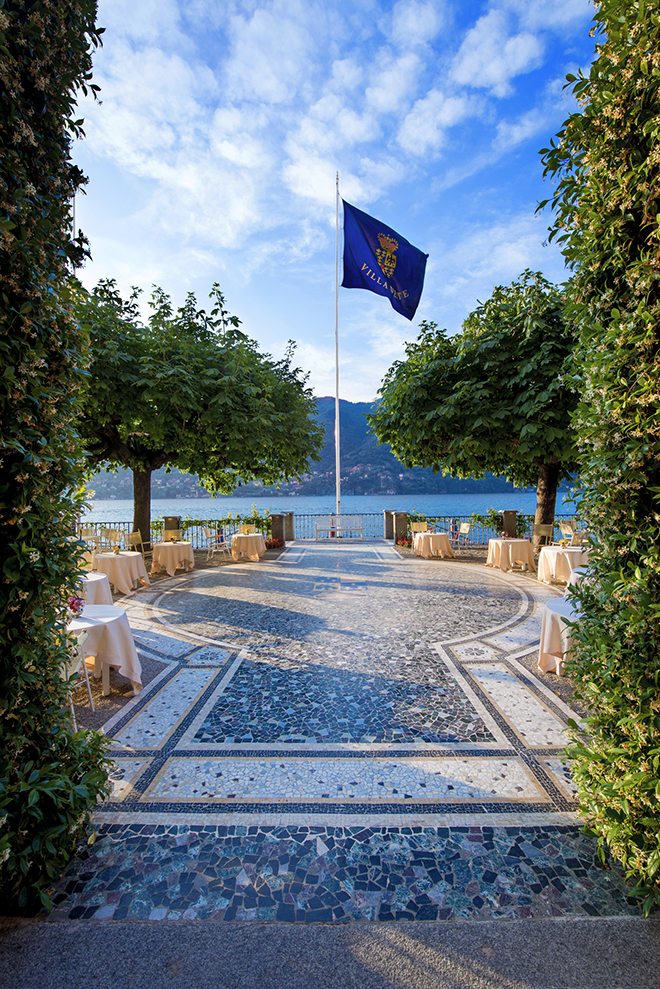 Santa Caterina, in Amalfi, is a stunning five-story beach hotel set amongst gardens and Lemon groves. After taking the ferry from Positano, we disembarked at the pier in Amalfi and took a short car ride to the hotel for lunch.

We rode an elevator that had been cut into the rock down to the Beach Club below. Lunch was a delicious offering of traditional and local specialities, with wines to match. The view, overlooking a series of natural terraces to the seawater pool and deck, jutting out over the sea, was a feast for the eyes. 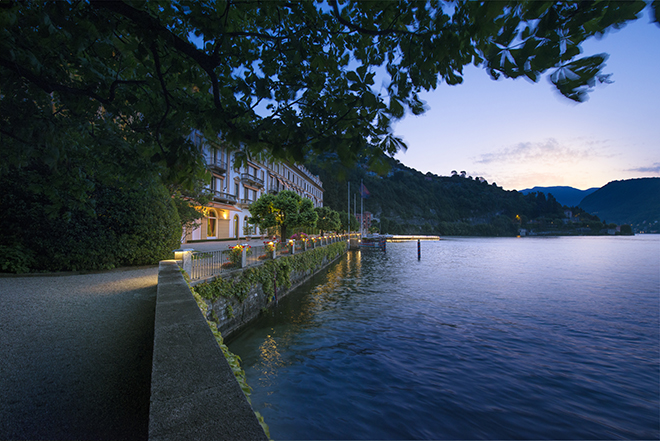 The dramatic resort originally built in 1880 is also a family run property. The Gambardella family has faithfully restored the rooms and suites with antiques from the family’s collection. Each room has a spectacular view overlooking the Amalfi Coast with a large number of suites set amongst the terraced gardens.

An early morning call gently reminds us we have a plane to catch and we reluctantly say goodbye to Positano.

John Steinbeck called Positano his ‘dream place.’ I am with you John; I too can share your dreams!  Such a jubilant town, we left with the church bells ringing in our ears and the image of octogenarians frolicking on the beach in bikinis and Speedos. 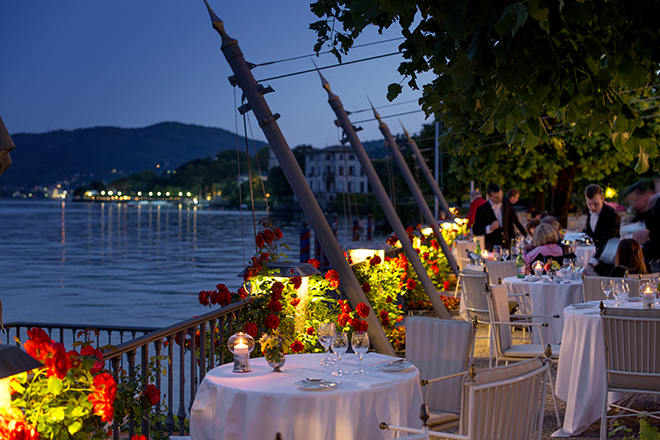 Villa d’Este, Lake Como is one of the most palatial settings in the world, situated amongst 25 acres of beautifully manicured and landscaped, lakeside gardens. The hotel is one of my personal favourites, ranked up there with, ‘where in the world would I like my daughter to be married or better still spend her honeymoon.

The main pool floats regally out over the luminous lake, and in the summer, it is the place to see and be seen. The Villa ( built in 1568) is the former Royal residence of Caroline, Princess of Wales who, according to the rumours of the day, wiled away her summers participating in all manner of parties. The hotel has played host to Princesses, Poets and Presidents as well as the odd Hollywood celebrity, George Clooney always goes to Villa d’Este when in Italy to dine at the informal Grill Restaurant. 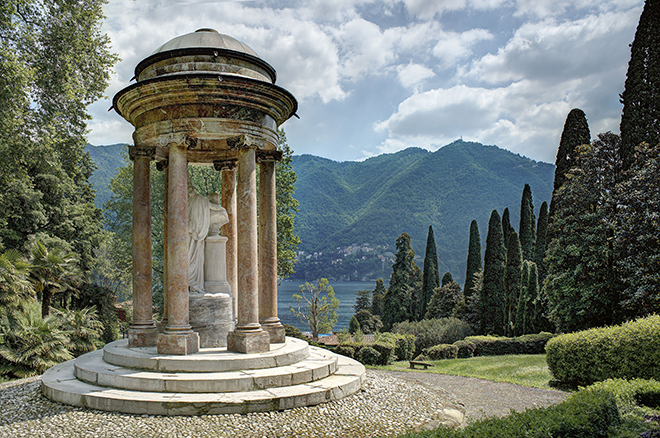 Our suite, overlooking the sparkling lake and gardens, was decorated in pale blue silk brocade and Empire furnishing dating back to Napoleons’ day ( a Hotel since 1873 ) yet refreshed and polished. The marble bathrooms have spared no expense, and as I lay luxuriating in the bath, I ruminated on who had stayed in the room before me…. If only these walls could speak!

We join the good-looking crowd for pre-dinner drinks by the lake and listen to the piano player. The evenings by the lake and in the restaurants, speak of a more elegant and graceful era, when men and ladies dressed for dinner, it is customary in the evening for gentlemen to wear jackets and tie in the main restaurant. After dinner, we meet again to dance to romantic tunes in the moonlight. 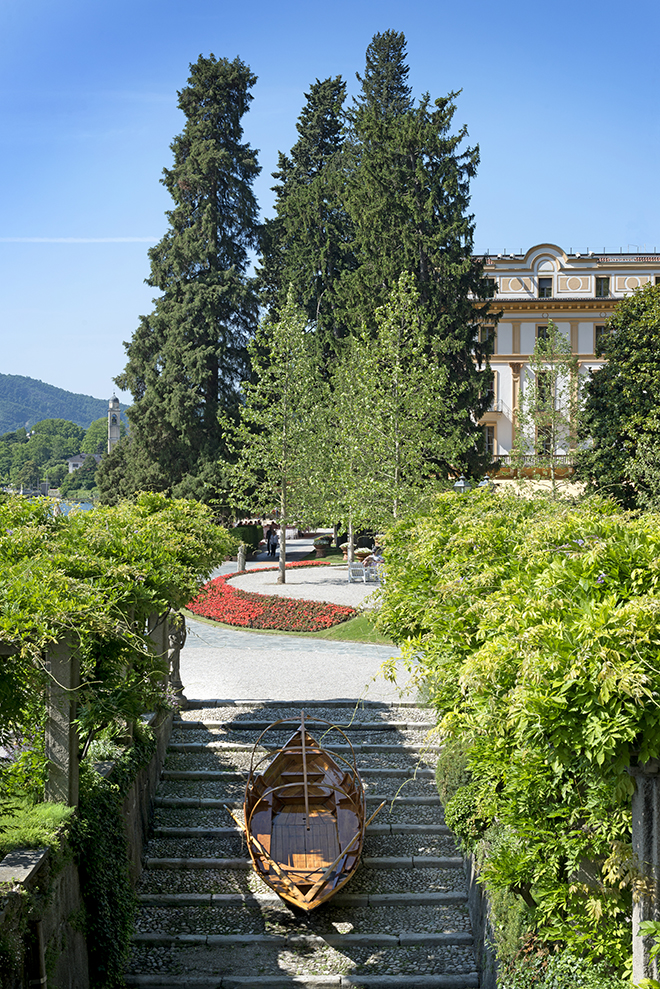 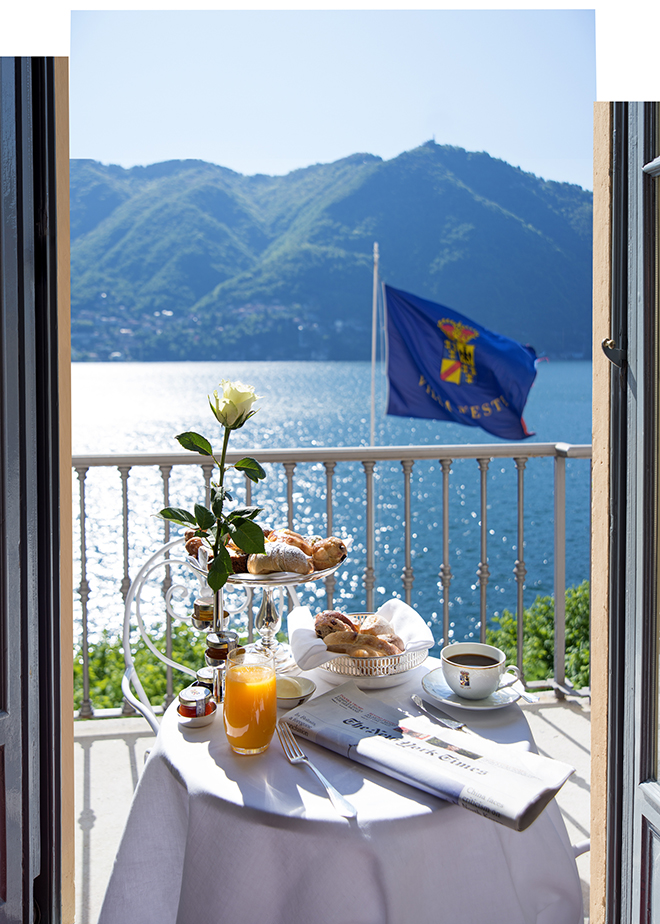 After Positano’s exuberant celebrations, Villa d’Este is gracefully quiet in comparison. Wealth whispers so they say, you can almost hear the sweep of silk crinolines cascading down the stairwells, but this is today’s hub of all things casually elegant in a refined and iconic fashion.

A bottle of Prosecco lay chilling in anticipation of our friend’s arrival from London. After a noisy reunion, we hired a speedboat to take us up the lake to the picturesque town of Bellagio. Behaving like Hollywood stars, we posed on the boat, our captain pointing out Villas with worthy historic and celebrity status. 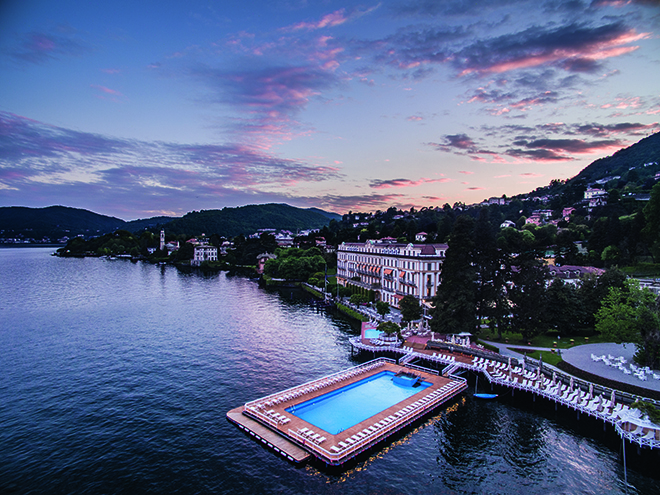 Bellagio, another postcard-pretty town, with plenty of shops to assuage the most ardent shopper’s needs. After stocking up on leather goods we boarded the boat to go to the little island of Comacina, where our host Benvenuto Puricelli prepared a sumptuous banquet for lunch in his Locanda dell’Isola restaurant. 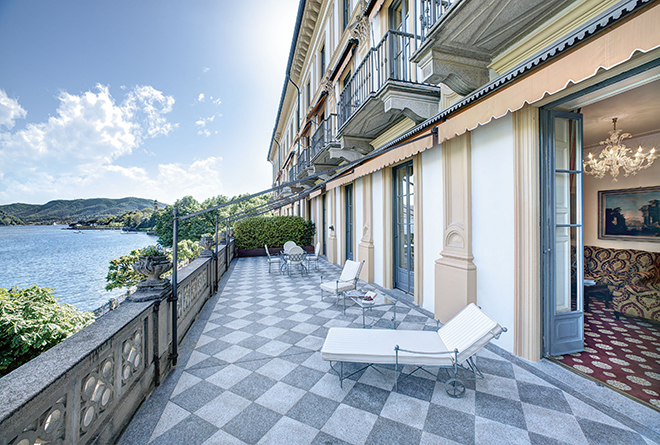 Comacina is Swiss in flavour as it is located very close to the border. We sat in the dappled shade of a Wisteria enjoying our food and wine, and watching with great amusement and somewhat alarm, at Benvenuto’s elaborate concoction of an after-lunch digestive.  Requiring large quantities of liqueur, and strongly brewed coffee, it was guaranteed to rev you up for a week!

For a change of pace, Villa d’Este is located within walking distance to the little town of Cernobbio, a quaint village with shops and attractive little restaurants. A popular watering hole is ‘Harry’s Bar’ serving up simple Italian dishes and wily cocktails.

“A journey is like a marriage. The certain way to be wrong is to think you can control it.” – John Steinbeck

On our final evening, we celebrated a special birthday, complete with an elaborate cake complements of the chef. We took wagers on the time the moon would rise above the mountains, fittingly the birthday boy won. The evening ended as elegantly as it started with a concerto in the sumptuous ballroom.

The following day we said  “arrivederci” to Villa d’Este, and our lovely friends and set about planning the destination for our next reunion.

The finest, together.
www.DestinationElite.com
For Concierge Reservations and Support, contact [email protected]com