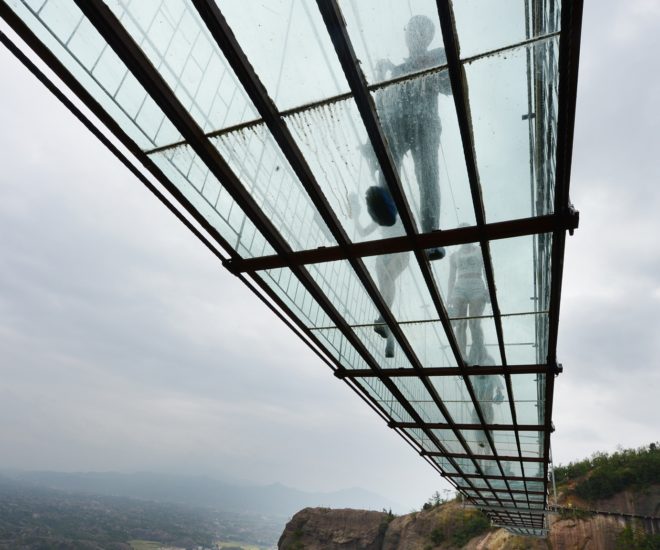 China’s first glass suspension bridge, which dangles 180 metres (594 feet) over a canyon in the central Hunan province, has terrified thousands of visitors since opening two weeks ago.

“I’m afraid to look down. I can only look straight ahead,” said one young woman crossing the 300-metre long structure.

Visitors were apparently not put off the experience despite news this week of cracks appearing on a glass walkway over a canyon in nearby Henan province, reportedly because someone dropped a stainless steel cup on it. Authorities insisted it was still safe. Visitors flocked to the Hunan glass bridge, in a scenic area of Pingjiang county, where officials were forced to impose a cap of 10,000 people a day during recent holidays.

The glass-bottomed bridge, which replaced a wooden walkway, opened on September 24 — just in time for China’s week-long National Day holiday. As dozens of people trudged across the bridge it shook underfoot and photos posted online showed some visitors kneeling or crouching on the transparent surface, too scared to move.

The structure is made from two layers of hardened glass with a total thickness of 24 millimetres (0.9 inches), according to state media.