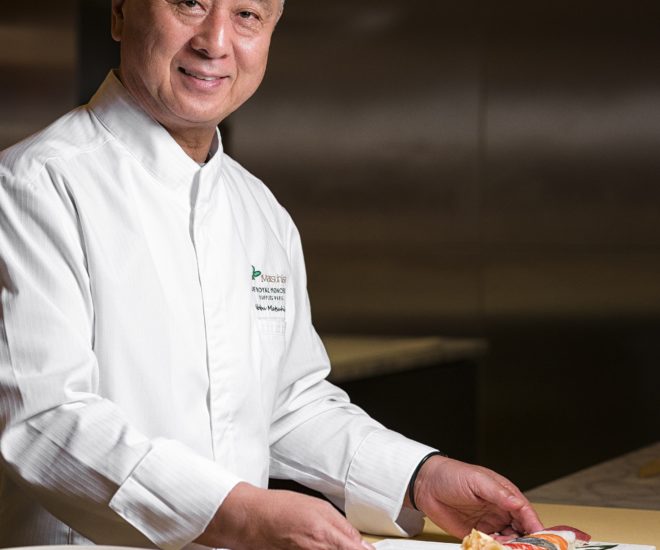 You might be familiar with the name Nobu if you have been paying attention to the international buzz over chef Nobu Matsuhisa and his restaurants in New York, Los Angeles, London, Tokyo, Hong Kong and Kuala Lumpur, amongst many other locations worldwide and in the USA. Since his partner in the Nobu business is Robert De Niro, he also has a certain pop culture cachet. His other line of restaurants, Matsuhisa, is privately owned by the Matsuhisa family.

Chef Nobu is quick to clarify that though he has been linked to Nikkei cuisine – the fusion of Japanese and Peruvian cuisine – his cooking is distinctly ‘Nobu.’

For the 67-year-old chef, that means cooking that is firmly rooted in Japanese cuisine, with just a few touches of Peruvian influences like jalapeno peppers, cured ceviches and anticucho, traditional beef heart skewers.

He frowns on labels like fusion and Nikkei, and prefers to describe his cuisine by his name, food that is “Nobu Matsuhisa.”

While in Paris to oversee his newest restaurant, Matsuhisa Paris at Le Royal Monceau hotel this week, the chef spoke about his second attempt at opening a restaurant in the French capital, sushi etiquette and the person he’d most want to cook for. What is ‘Nobu’ cuisine?

I started training in Tokyo when I was 18 years old and started cooking Japanese food. Then I moved to Peru and saw a lot of different ingredients like lemons, garlic, cilantro, onions so I started making Japanese dishes with Peruvian ingredients. But my base cooking is Japanese. This is what I call Nobu-style food.

This isn’t the first time you opened a restaurant in Paris. In 2001, you opened Nobu. What’s different this time?

When I opened Nobu Paris in 2001 I was a bit disappointed. The restaurant wasn’t perfect. So we closed it after a year and a half. Now, 15 years later my partners and I have opened restaurants in Mykonos, St. Moritz, Athens, Munich… so we have teams in Europe. Before we opened in Paris this time, we also did pop-up promotions to test the grounds.

You’ve added hotelier to your resume with two hotels and another three coming up in London, Miami and Saudi Arabia. What do you look for when you stay at a hotel?

For me, there has to be a nice gym. I like the Royal Monceau for their swimming pool. I swam today and yesterday. I like to exercise so a gym is very important. Of course, hospitality and good service is important. But sometimes too much service is very uncomfortable too. I don’t like overly complicated hotels. I like simple.

What are some of the mistakes you see diners make when they eat sushi at your restaurants?

In Japan, we never use too much soy sauce. When you eat sushi in Japan, never mix wasabi with soy sauce because the sushi already has wasabi between the fish and the rice. Also the sushi chef will often brush soy sauce on the fish. And in Japan you eat it in one bite. This is the real way. In America and Europe they mix wasabi with lots of soy sauce. Also, in Japanese culture, Japanese people never put soy sauce on their steamed rice. In the beginning when I saw this I was shocked. But now I laugh.

If you could cook for one person that you haven’t cooked for yet, who would it be?