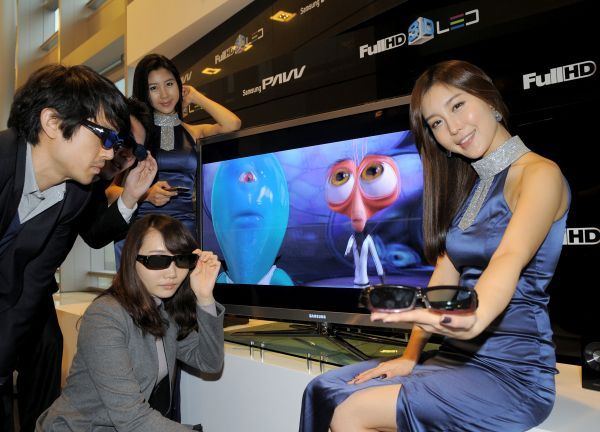 Viewers are to wear electronic glasses that open and close rapidly in time, with images designed for the right and left eye, creating a three-dimensional effect.

Samsung also announced the expansion of its strategic alliance with DreamWorks Animation, the US maker of “Shrek,” “Kung Fu Panda” and other hit movies to speed up the worldwide deployment of in-home 3-D to mainstream consumers.

This will include a first-time feature-length, 3-D Blu-ray version of DreamWorks Animation’s 2009 release, “Monsters vs. Aliens.

Growth of 3-D has been slow because of a lack of programming, the need to wear special glasses and the higher prices of 3-D sets, but the recent release of science fiction blockbuster “Avatar,” a 3-D film by “Titanic” director Cameron, has renewed interest in the medium.

“3-D is more than just a groundbreaking technology – it’s the future of television, and we are committed to bringing this total viewing experience to consumers everywhere with the best picture quality in 3-D content possible,” said Yoon Boo-Keun, president of Visual Display Business Unit at Samsung Electronics.

Rapper Will.i.am and his three partners in the The Black Eyed Peas were on hand to promote Samsung’s new 3-D TV technology.

“This is going to enrich how you view sports, movies and TV at home,” he told reporters.

Also present at the launch ceremony were US magnate Donald Trump and Cameron, who has played a key role in promoting the development of 3-D content.

Samsung officials say they hope to sell around two million 3-D TV sets this year worldwide. Prices are expected to range from around 2,000 dollars for 40-inch models to around 7,000 dollars for 55-inch LED C9000.

Meanwhile Samsung’s Japanese rival Sony said Tuesday said it would start selling 3-D TV sets in Japan in June, but it has yet to announce a launch date for overseas.