Hong Kong auction houses are feeling upbeat about the upcoming sales season. From rare wines to Chinese paintings and expensive jewels, all the big names are gearing up for sales season. 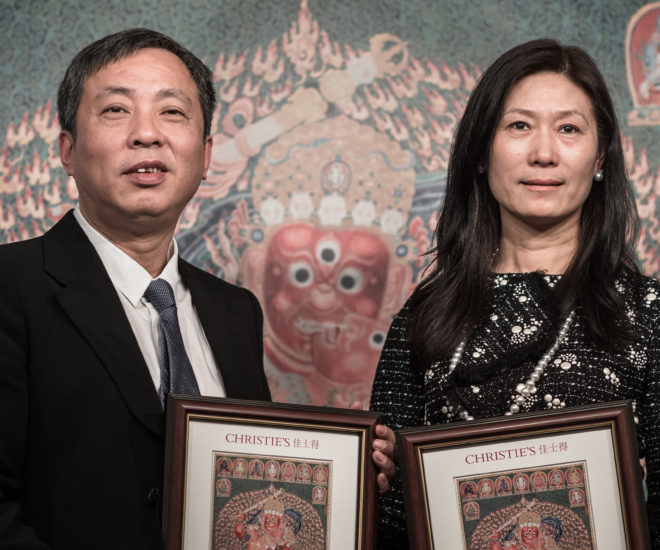 Hong Kong auction houses are feeling upbeat about the upcoming sales season. From rare wines to Chinese paintings and expensive jewels, all the big names are gearing up for red letter days, with the mood buoyant despite China’s economic downturn.

Hong Kong billionaire Joseph Lau spent a record US$48.4 million on a 12.03-carat diamond dubbed “Blue Moon” for his daughter in a Sotheby’s auction in Geneva.

That came a day after he had snapped up a rare 16.08-carat pink diamond at Christie’s for US$28.5 million, also in Geneva.

Also in November China’s Liu Yiqian, a taxi driver turned tycoon, bought Modigliani’s “Nu Couche” in New York for US$170.4 million. Further reports indicate that Liu may have been interested in the American Express points resulting from the purchase; he used AmEx to purchase the Modigliani.

“Frankly a few weeks ago I was not sure what to expect because of what happened during the summer and what happened in China with the slowdown…(but) the past two weeks were absolutely sensational,” Christie’s chairman of Asia Pacific François Curiel told AFP.

“At the moment I don’t think there is any slowdown in the appetite of Chinese collectors,” he said as the London-based auction house unveiled its Hong Kong autumn sales offerings for the first time Wednesday.

“They see works of art as a safe way of putting some money away.”

Among Christie’s highlights are ancient ceramics, works by prized Chinese painters as well as diamonds and rubies including “The Crimson Flame”, a rare 15-carat Burmese “pigeon blood” ruby.

Rival Sotheby’s, also holding a series of sales in the coming weeks, admitted top-class auctions may see fewer bidders, but the elite are still willing to spend their wealth.

“If you compare the market to where it was in 2010 and 2011 when there was a lot of hot money coming in from China… people were just throwing money around, we’re very far from that climate today,” Sotheby’s deputy chairman for Asia Nicolas Chow told AFP.

“(But) at the top level you still have very strong mainland buyers.”

“For as long as we compose a sale carefully, tidily, I’ve got a lot of confidence in the years ahead,” Chow added.

The auction house in October broke the record for Chinese imperial portraiture after selling the portrait of Chinese Emperor Qianlong’s consort by Italian artist Giuseppe Castiglione for over $17 million.

Newer auction houses on the Hong Kong scene will also be joining the fray.

Britain’s Bonhams opened an office in the city last year and will be holding watch, jewellery and Chinese art sales as well as a rare camera auction including a US spy camera disguised as a pack of Lucky Strike cigarettes.

Rare coin and money specialists Stack’s Bowers, based in the US but tapping into an expanding Asia market, will offer “space collectibles” at a sale in Hong Kong.

The auction will include coins and stamps taken on board Shenzhou 1, the first test flight of China’s manned space programme, launched in 1999.