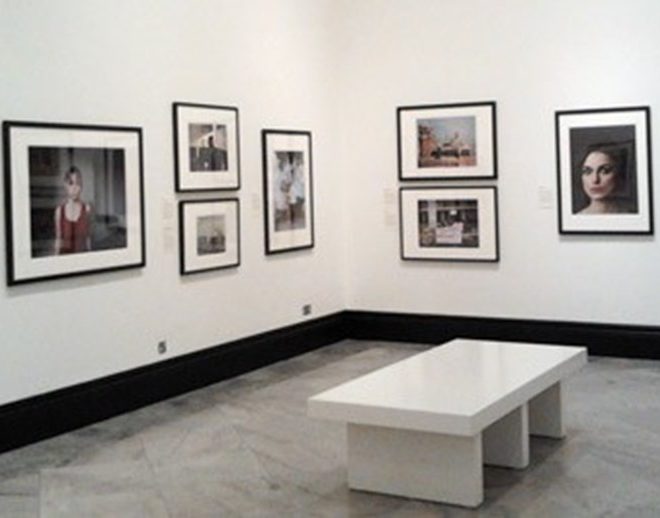 This year, Spencer Murphy was named winner of the 2013 Taylor Wessing photographic portrait prize. The £12,000 award was presented to Murphy on 12 November 2013 at the National Portrait Gallery for his photograph of jockey Katie Walsh. This year the competition received over five thousand submissions by over two thousand artists. Out of those five thousand, only 60 have been chosen for the exhibition that will run from 14 November to 9 February 2014.

Murphy is no stranger to the annual photographic exhibition. The London-based photographer has had his works exhibition seven times so far and besides winning this year’s competition, he won Third Prize for his portrait of actor Mark Rylance last year.

Spencer Murphy, 35, grew up in Kent and studied at the Kent Institute of Art and Design before gaining a BA in Photography at Falmouth College of Arts.

The winning portrait was taken at the Kempton Park Racecourse, where Katie Walsh was photographed while shooting a series of jump jockeys’ portraits for Channel Four’s The Original Extreme Sport campaign. Murphy wanted to show “both her femininity and the toughness of spirit she requires to compete against the best riders in one of the most demanding disciplines in horse racing.” The portrait was shot on a large format film as Murphy felt that it gave the images “a depth and timelessness” that would be hard to achieve on a digital camera.

The exhibition explores a range of themes, styles and approaches to the photographic portrait through the different methods used by each artist, be it a more formal portrait of famous faces or simply portraits of friends and family. It also allows the audience to question and wonder in what ways we judge beauty. Whether it’s from a young lady to an old man, it makes us think of what defines beauty and in what ways can each portrait be considered a prize-worthy portrait.

Beauty in its own has a very wide definition that is based on people’s preferences and perception. Based on society’s image of women, most people would agree that female beauty would be considered to be in the form of cleanliness and perfection whereas Murphy’s portrait has mud splattered all over Walsh’s face. With the look that she gives with her frown, together with the mud, it almost makes you feel uncomfortable looking at the portrait. It certainly evokes a sense of empathy and curiousness into what the rest of her story is.

Besides the first prize, other artists won the second, third and fourth prize as well. This year’s competition was definitely a success, as Tim Eyles, UK Managing Partner at international law firm Taylor Wessing, comments, “The photographic talent in the competition this year was as outstanding as ever. The selection of these winning portraits from the thousands submitted is a great testament to their quality.”