Described as a “legend” and “maestro” by his peers when barely 50, world-famous Norwegian superyacht designer Espen Øino likes to talk disarmingly about his holidays and his work on the majestic 182m REV. 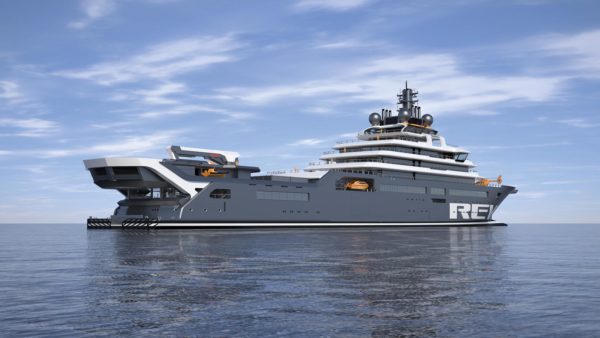 At Ft Lauderdale in the early 2000s, as his remarkable all-aluminium 70m+ superyacht co-venture Hanseatic Marine, now SilverYachts was being launched south of Perth, Western Australia, he spent half an hour on his Vaio laptop showing us snaps of SilverYachts co-founder, German billionaire Guido Krass, and himself on a family break in Europe. Singapore Yacht Show (SYS) this year was no different. A few months earlier he had been on the Russian-owned 73m Abeking and Rasmussen-built Cloudbreak in Antarctic waters. Exhilarating snow skiing is one of his latest activities in those somewhat unusual parts. Watch out for the penguins.

“I can’t really talk about what I do, because everything is governed by confidentiality clauses”, he says innocently. This from the now Monaco-based designer of Lürssen’s under-wraps 135m Project Thunder, which is about to head gradually for Asia-Pacific waters – see separate yard update this issue – and of their 136m Shu completing sea trials, and of an incredible 182m Fincantieri and Norwegian built Research Expedition Vessel (REV) scheduled for 2020 delivery to help save the world’s oceans and fisheries. He visited SYS for the first-time last year, when the 77m SilverFast was here, and as he pottered politely around the superyacht stands this April, saying hello here and there, one had to wonder if anyone but the elite cognoscenti knew that a designer of this repute was in their midst. Øino says he is a disciple of the late great Australian superyacht stylist Jon Bannenberg, as is Fremantle-based premier Oceanco designer Sam Sorgiovanni who was also in attendance, the latter about to deliver the 84m White Rabbit G built at Echo Yachts, located next door to SilverYachts, to a Singapore owner. Bannenberg’s former partner, Tim Heywood, is the design force behind Amels Limited Editions regularly shown at SYS.

A stunning aerial view of the 182m REV

But nobody, apart from perhaps Britain’s Andrew Winch, really comes close to Øino now, as his 50th superyacht, in a remarkably short career, looms. The revolutionary 71m Lürssen superyacht Skat launched in 2001, an angular vessel that people loved or hated, effectively kick-started Øino’s rise to prominence. Others have since included the 156m Dilbar, the 155m Al Said, the 140m Ocean Victory and 134m Serene from Fincantieri which have both been cruising Asia-Pacific waters in recent years, and Microsoft co-founder Paul Allen’s 126m Octopus often in the Philippines archipelago and various Pacific island groups. Heesen’s 70m flagship Galactica Super Nova is a Øino design. Quite a portfolio for a young lad born into a boating family near Oslo in 1962, whose parents sent him to study naval architecture in Scotland. He was later apprenticed to highly respected designer Martin Francis, himself a protege of Lord Norman Foster, and nowadays he has offices overlooking Port Hercule in Monaco, where his wife runs the exclusive Sabrina Monte-Carlo stores.

“What I can talk about”, he says almost mischievously, knowing we know his background, “is our 182m Research Expedition (REV) project, which is probably the most important vessel of my career”. “This is a real yacht with a real purpose. It is being created at the behest of a prominent Norwegian billionaire and philanthropist who has owned several superyachts in the past and wants to give something back by helping to clean up and protect the world’s oceans”.

Øino doesn’t say so, but the patron is easily identified online as Kjell Inge Røkke, who has previously had super sailboats Aquijo and Aglaia and the Benetti Reverie. A former commercial fisherman in his early days, he has now signed up to the Warren Buffet-Bill Gates philanthropy pledge, seeing his duty as removing plastic and floating rubbish islands from the world’s oceans, and pressing for more sustainable fishing. The vessel’s hull is being built at a Fincantieri facility in Romania and will then be towed to another yard in Brattvaag, Norway, for some outfitting. Following a handover in 2020, she then returns to Romania for further fairing.

Says Røkke in a talk with Amsterdam-based Superyachttimes.com: “There may not be any economic rationale for such a ship, but the case is compelling from the oceans’ point of view”. “I look forward to working with scientists, marine experts, environmentalists and positive, knowledgeable, solution-oriented people both in Norway and internationally”.

“The ship will be offered as an arena for scientists and explorers from all over the world”.

“The vessel will be built to the highest standard, making it suitable for charter to private individuals, companies and institutions, which will generate research funding, and my family and I will also charter and use the ship as a place for recreation and inspiration”. Apart from the 181.6m LOA, the REV will have a beam of 22m, draws 5m light ship, and has a 40m freeboard to the deck. Gross tonnage is 16,000 GT. Twin 2,400 Kw Caterpillars will enable a maximum speed of 17 knots, and at half load, she will be able to cruise non-stop for 21,000 nm. In research mode, she can carry up to 60 scientists and 40 crew.

For luxury expeditions, the REV is designed to accommodate 36 guests and 54 crew. To keep himself occupied, Øino also dabbles with Norway’s long-running 35-foot Windy production yachts, and assorted builds in Turkey.