Made with state-of-the-art materials in various limited editions, the Italian house pays tribute to the boxing legend. 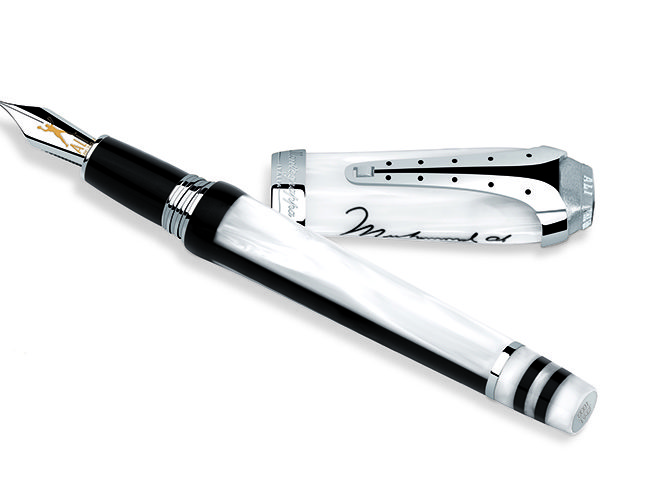 Beauty is augmented when imbued with cultural significance. This is true for the Montegrappa pen, with its “Icons” series that pays tribute to cultural giants, and professional boxer Muhammad Ali, whose rakish gracefulness hid a larger-than-life persona. Marry the two and you get the limited edition “Tribute to Muhammad Ali” pen, the epitome of elegance and historical weight.

A description of the pen would fall flat without a better understanding of the man who inspired it. His name is known to most – especially since his death unified the world in its mourning – but it doesn’t go far beyond name recognition. More than just an obvious excellence in his career – we’re looking at six Kentucky Golden Gloves titles, three World Heavyweight Boxing championships and a gold Olympic medal, among others – his strong convictions (he objected to the Vietnam War and suffered the consequences) and conversion to Islam renders him a notable persona beyond the confines of sport. In a reflection of the iconic boxer, the nib of the pen sports his memorable “raised arms” silhouette and an inscription of his name “Ali”. The charm lies in the details: the collar between the nib and barrel is made of black resin, and the body of the pen bears a finish of white pearlised resin, with a stripe of black echoing the man’s boxing shorts. Of course, a luxury pen’s beauty is not merely skin-deep: state-of-the-art materials make it lightweight and warm to the touch, while advanced engineering techniques mean it will retain its performance for generations, according to Montegrappa.

The tribute pen is available in fountain or roller in resin with sterling silver trims, in a limited quantity of 1,942 each (the year Muhammad Ali was born). A further 61 fountain pens with solid gold trims (he fought 61 fights), 56 roller balls with solid gold trims (he won 56 fights) and 37 “knock-out” editions of gold trimming and diamonds (you guessed it, he won by knock-out 37 times) will be available. They say the pen is mightier than the sword (or in this case, the fist), but elegance is what will etch your name in the annals of history.