High on masculinity and full of character, the new Bell & Ross BR 05 chronograph exudes a quiet strength which belies its subtle elegance, hiding its perfection in the details 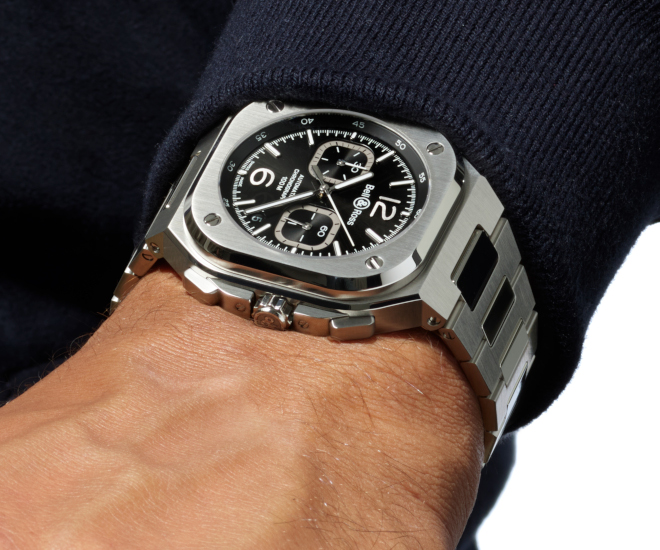 Oversized, instrumental and immediately distinctive, the new BR 05 chronograph joins the family of integrated bracelet Bell & Ross BR 05 watches. Featuring the same aesthetics driving the brand’s most iconic models, the BR 01 and BR 03, the new BR 05 chronograph is the latest in the series to play up the signature “circle within a square” element in the popular sports watch genre.

“This type of design harks back to a category of watches which appeared in the 1970s and when infused with Bell & Ross’ signature identity, the resulting graphic style is both striking and modern.” – Bruno Belamich, Bell & Ross Creative Director 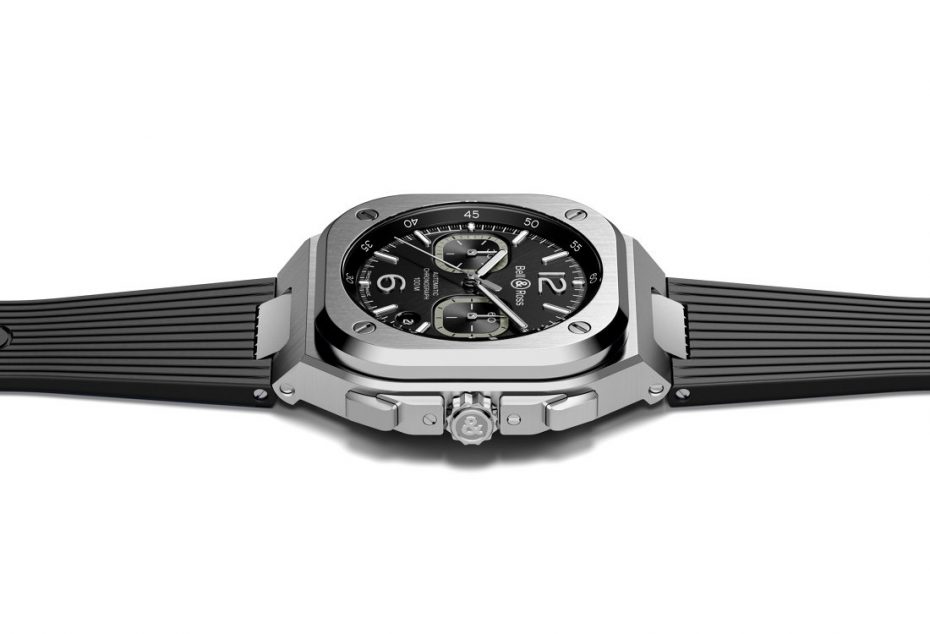 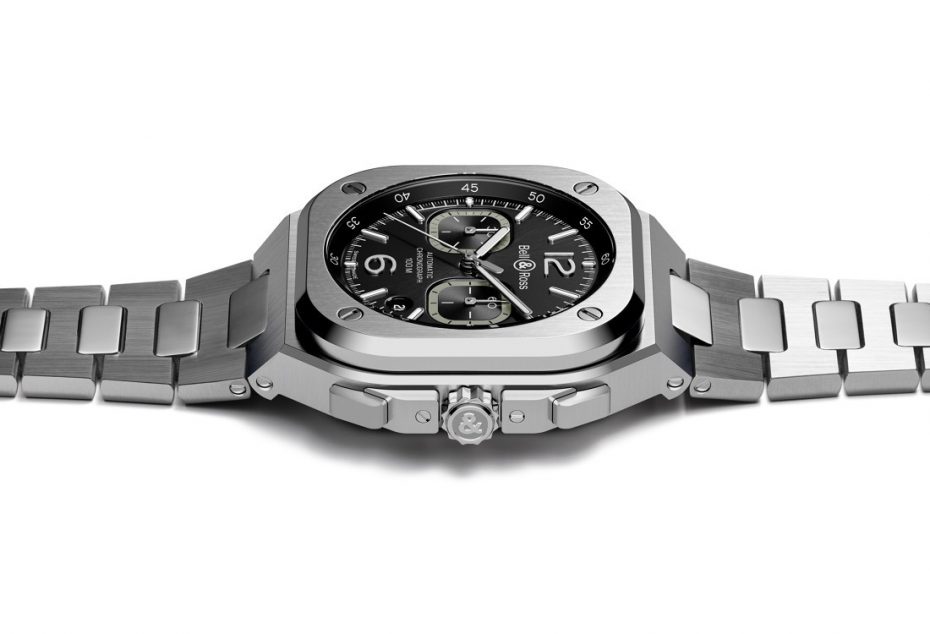 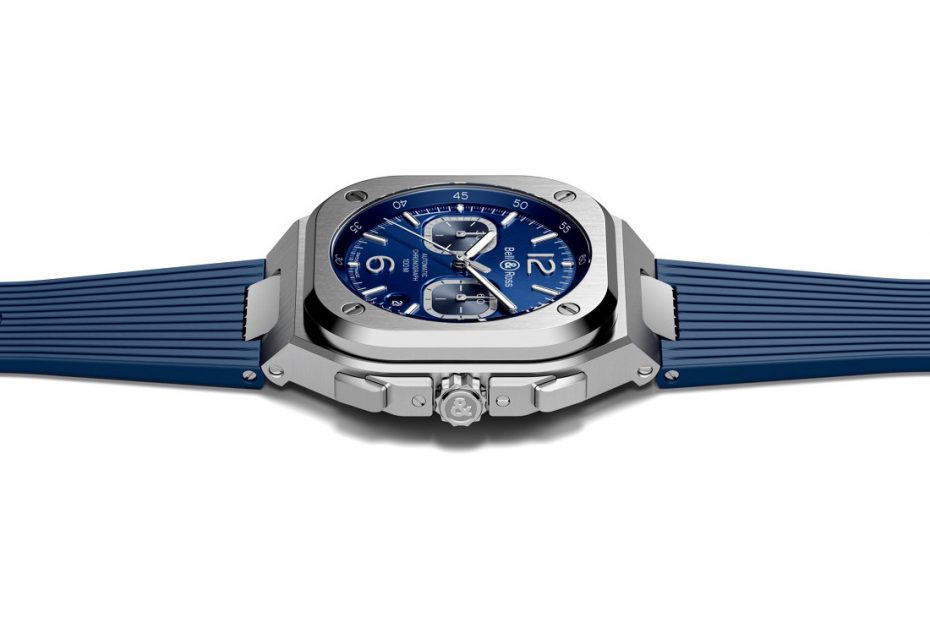 “The case and bracelet form one unit” explains Bruno Belamich, the brand’s Creative Director. The new Bell & Ross chronograph is 42mm, up from the base-model 40mm BR 05 while applying the same design elements like perfectly flat satin-polished surfaces and polished bevels which enhance depth and volume, but the biggest update is reserved for the twin super-ellipse (rounded square) chronograph registers which anchors the entire look by mimicking bezel and midcase.

While the iconic BR 01 and BR 03 are undeniably aviation cockpit inspired, it bears mentioning that the new BR 05 chronograph is evocative of an era of automotive racing watches like the 1970s Heuer Silverstone. This isn’t a criticism though, where the BR 05 chronograph excels is the fact that it is highly sculptural, recognisably modern while still seductively refined as its smaller, authentically retro counterparts. 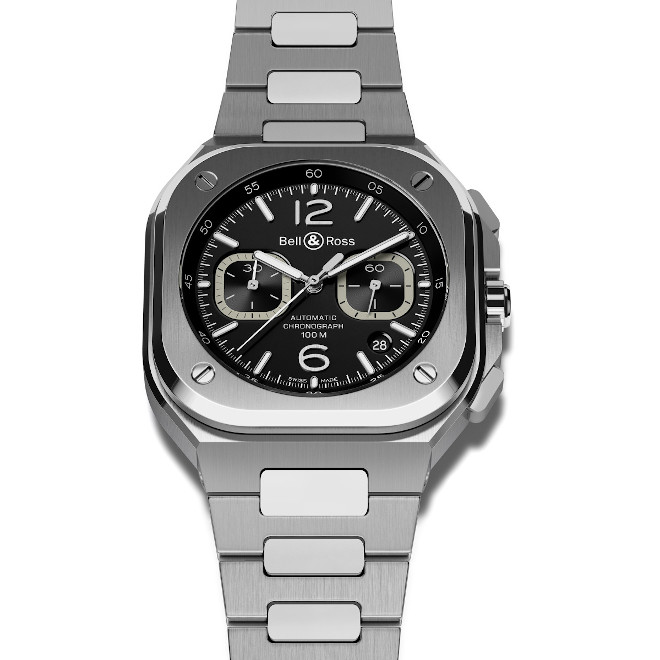 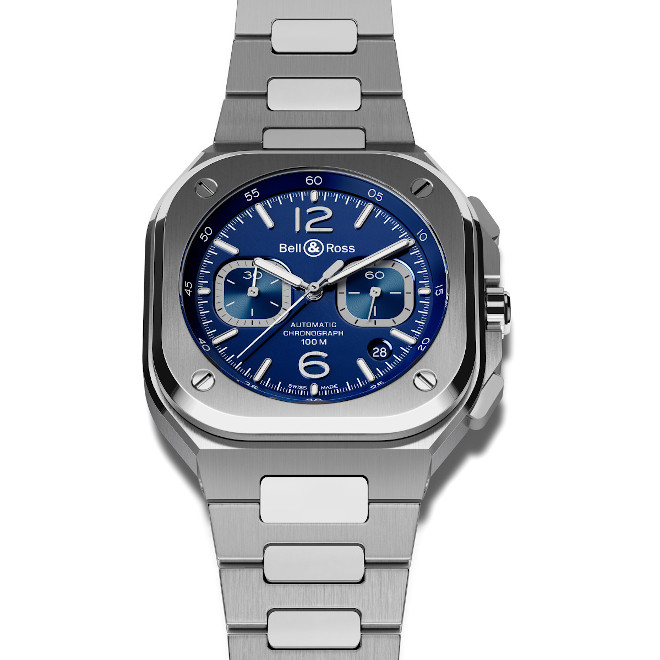 High on masculinity and full of character, the new Bell & Ross chronograph exudes a quiet strength which belies its subtle elegance, hiding its perfection in the details. Large Arabic 12 and 6 numerals firmly echo the design language of the original icons while not forcing the squircle chronograph registers to co-exist with 9 and 3 o’clock markers.

The 42mm BR 05 chronograph also enjoys more flexibility with layout thanks to increased dimensions, allowing the design to breathe a little better. The integrated pushers also serve as a defacto crown guard which creates a fluidity of lines not commonly found in many traditional chronographs: What results are two variations of a highly wearable Bell & Ross sports chronograph dubbed “Black Steel” and “Blue Steel” for its dial variations and available on both a rubber strap and an integrated bracelet. 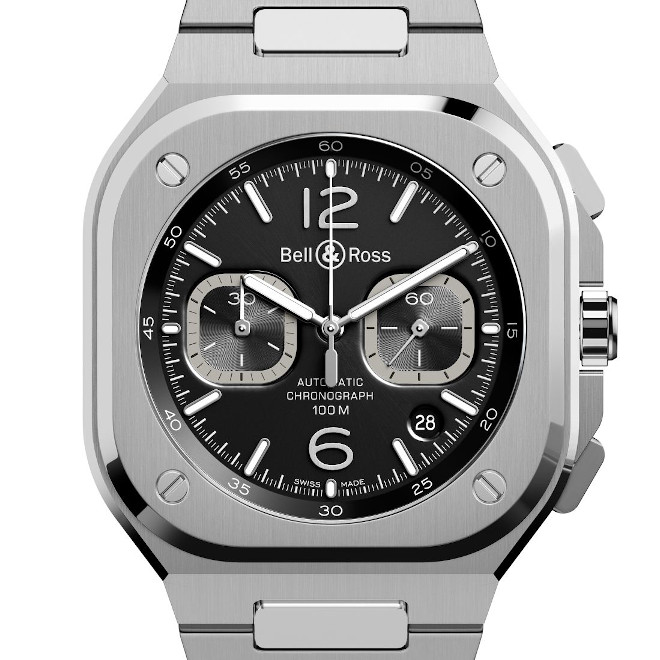 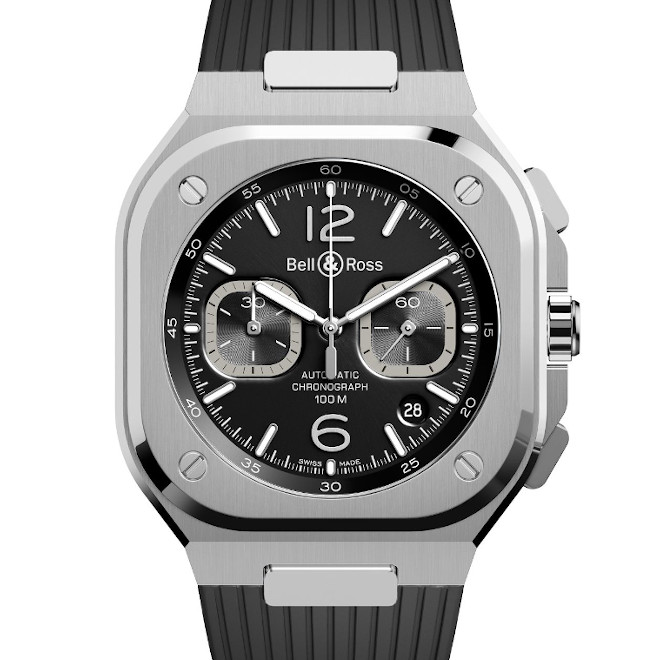 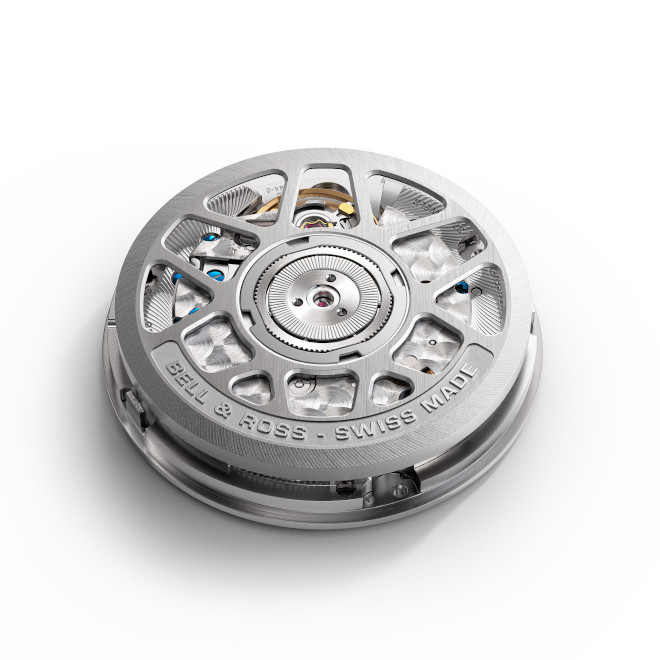 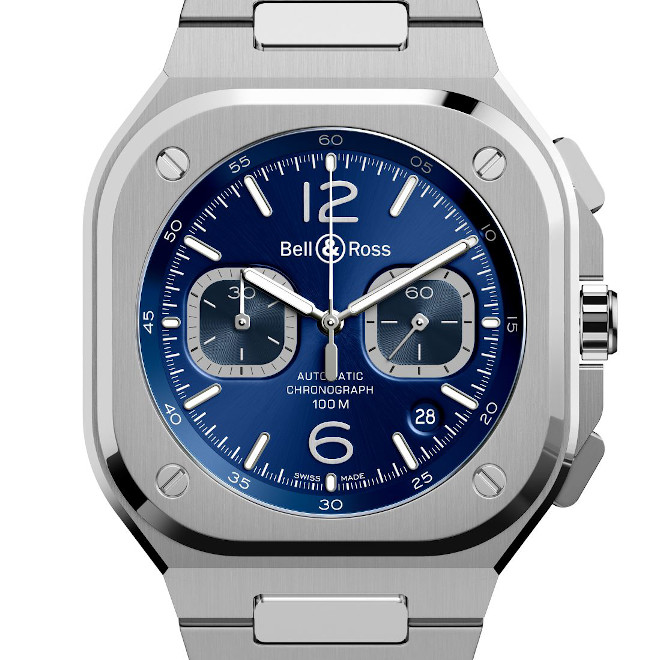 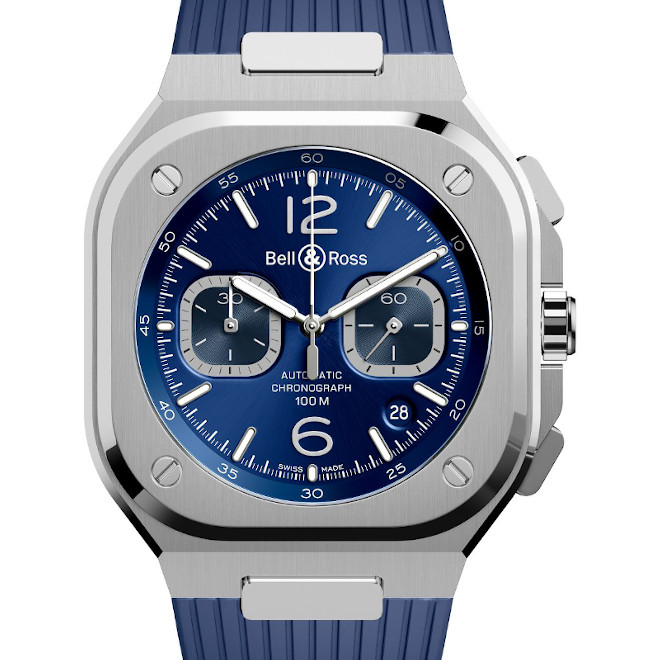 The angle of the attachment to the bracelet has been carefully designed to follow the contours of the wrist, ensuring a secure and comfortable fit. The BR 05 chronograph’s identity is also built on a multitude of small technical and aesthetic details which truly elevate it: By blending fluidity and robustness, the continuity of the lines of this piece becomes a part of its identity. 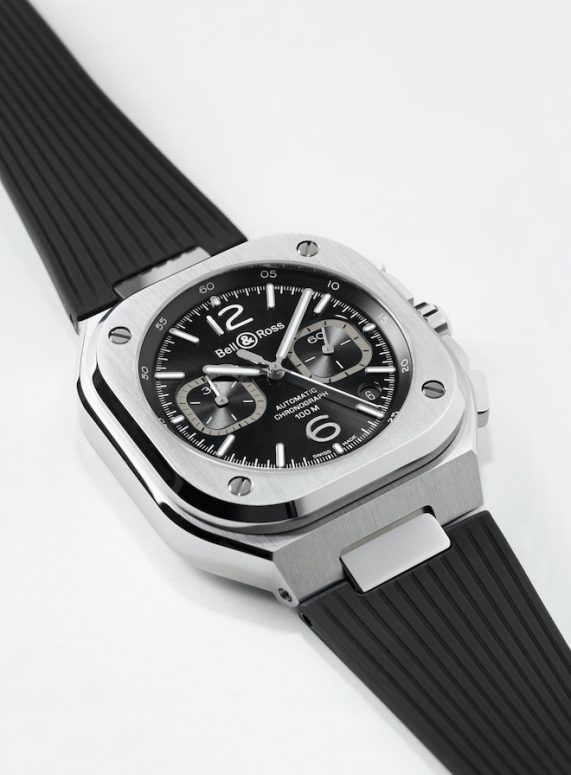 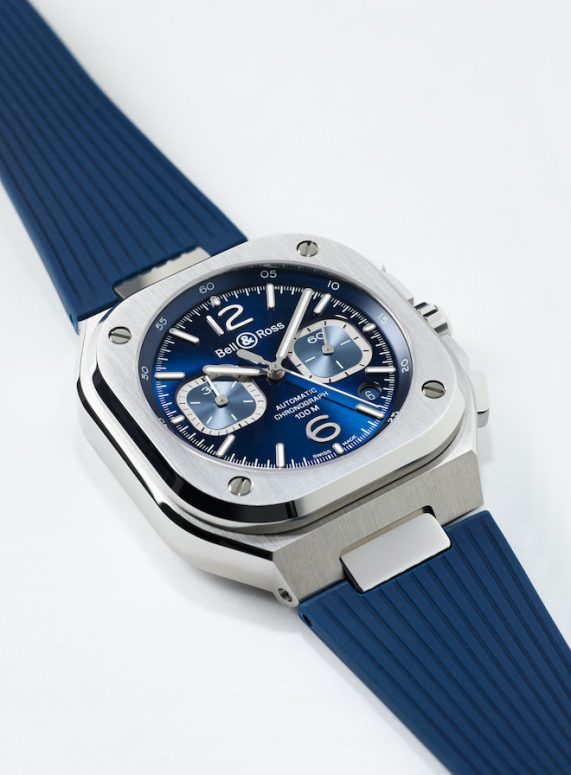 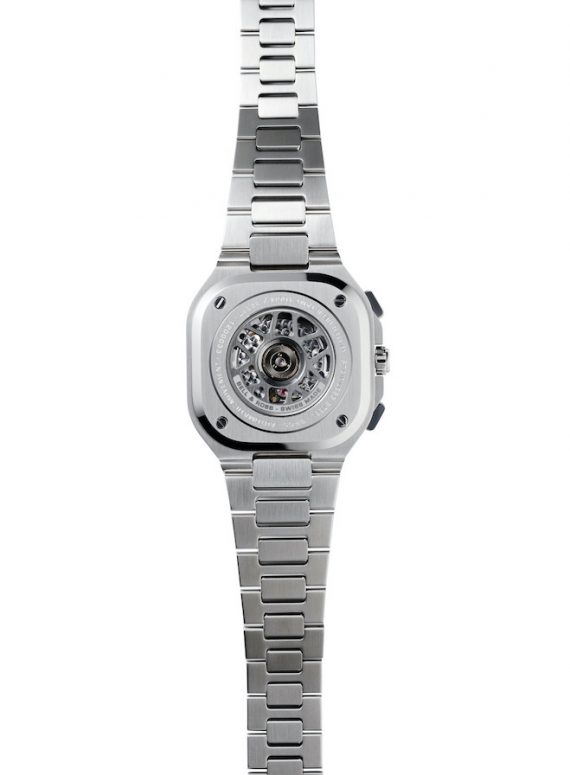