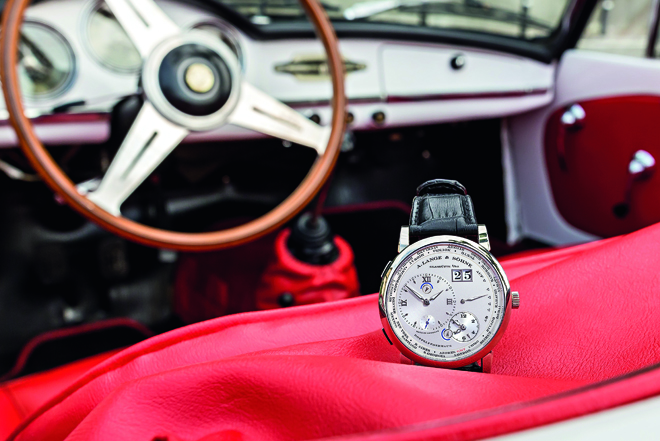 During the week of the 24th to 26th of May 2019, the annual A. Lange & Söhne d’Eleganza Villa d’Este was once again in gull swing at the Grand Hotel Villa d’Este in Como, a gathering of classic cars, classic car enthusiasts and of course, classically styled mechanical timepieces. The Concorso d‘Eleganza, has been held at the Como Villa since 1929 and this year, a piece unique Lange 1 Time Zone was awarded to the “Best of Show” winner. But this year was doubly special, mid Concorso, Lange announced their fifth model of the 25th anniversary collection – a 25 limited edition white gold Lange 1 Time Zone on the 25th of May.

In commemoration of the 25th birthday of the Saxony manufacture, Lange released 25 limited editions of the Lange 1 Time Zone in white gold with blued-steel hands, in essence, one of the world’s most practical and functional complications in an exquisitely appointed execution. 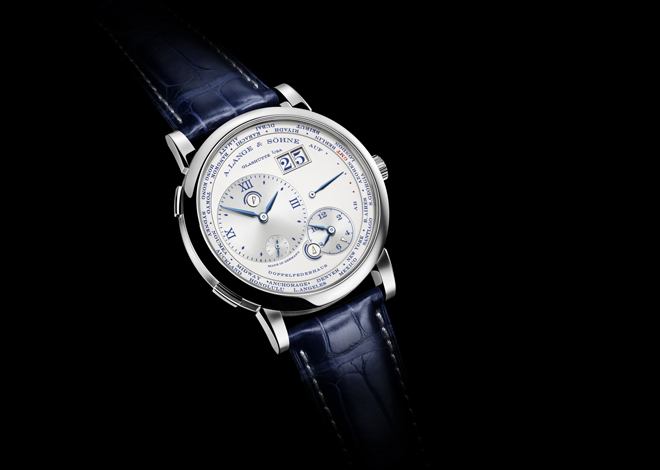 While smartphones provide localised time information across the world at a glance, where the Lange 1 Time Zone excels is its ability as a world-time watch simultaneously tells the time in several zones all while seated upon your wrist thanks to its clearly legible double time indication with a city ring that simplifies the setting of a second time zone. Two asymmetrical dials, one large than the other form the signature aesthetic foundations which A. Lange & Sohne has become recognised for – the larger of the two indicates home time or in pilot parlance – “time at origin”, while the smaller of the two, indicates local time or time at destination.

Furthermore, operated by a subtle corrector at 8 o’clock, 24 pushes cycles you through each of the 24 time zones, each represented by a city name on the peripheral city ring framing the dial with neat “rows” of text, punctuated by a golden arrow at 5 o’clock pointing at the name of the city representing the currently displayed time zone. Meanwhile, dual day/night indication provides extra orientation, which even for the most intelligent of us, often have difficulty figuring out “is it day or night over there?” – on the Lange 1 Time Zone 25th Anniversary Edition, two time circles, bright/dark segments, featuring a small arrow indicator, signals to the user whether it is day or night, separately for home time and for the second time zone. 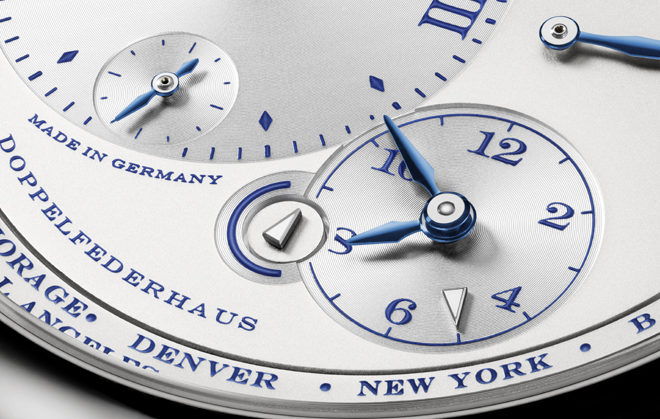 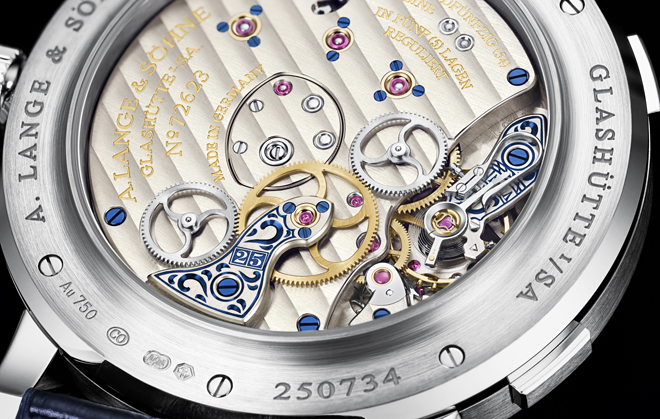 A feat of engineering imbues the Lange 1 Time Zone with a mechanism which makes it possible to swap the zone time on the subsidiary dial to the large dial – a feature not found outside of the atelier – useful, for when those trips become long enough for your current home to be a home away from home.

Like the other Lange 25th Anniversary Editions, the Lange 1 Time Zone is primarily a palette of silver and blue, headlining the 42mm (41.9 to be precise) “largish” Lange 1 is its argenté-coloured dial complete with iconic outsize date while the reverse is visually dominated with the the manually wound calibre L031.1 features thermally blued screws, blue inscriptions, a twin mainspring barrel with a power reserve of three days. The traditional Lange balance cock is graced with a blue line engraving with the anniversary number 25: Its typography and shape correspond to the Lange outsize date. It is the shared attribute of all models of the ten-watch “25th Anniversary” collection. 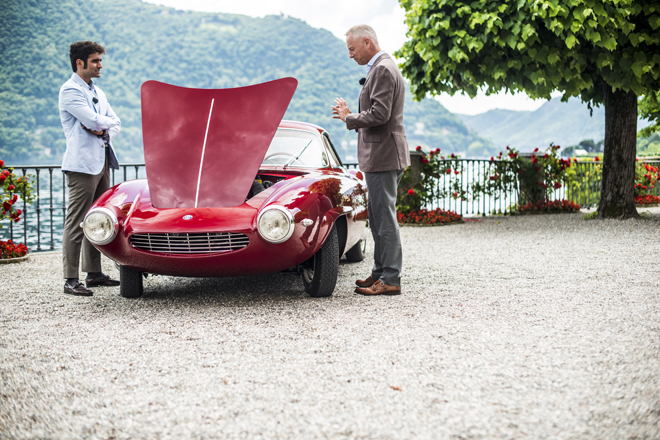 Concorso d‘Eleganza “The Symphony of Engines”

“The Concorso d’Eleganza is all about the idea of collecting, preserving and making sure these works of art survive the test of time. That is why  we are committed to the world of classic cars. It reflects our passion for sophisticated mechanics  and thrilling design, which is deeply rooted in the corporate culture of A. Lange & Söhne.” – Lange CEO Wilhelm Schmid 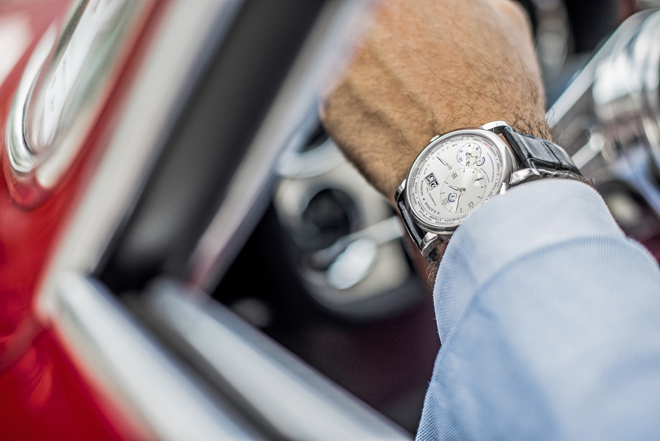 The Concorso is in its 90th year and among the “symphony” of 6, 8 and 12- cylinder engines adding to the cacophony of park of Villa d’Este, it’s hard to miss another, albeit littler engine, every inch as powerful in its own right – the bespoke Lange 1 Time Zone “Como Edition” paying tribute to the heritage luxury classic car fair. 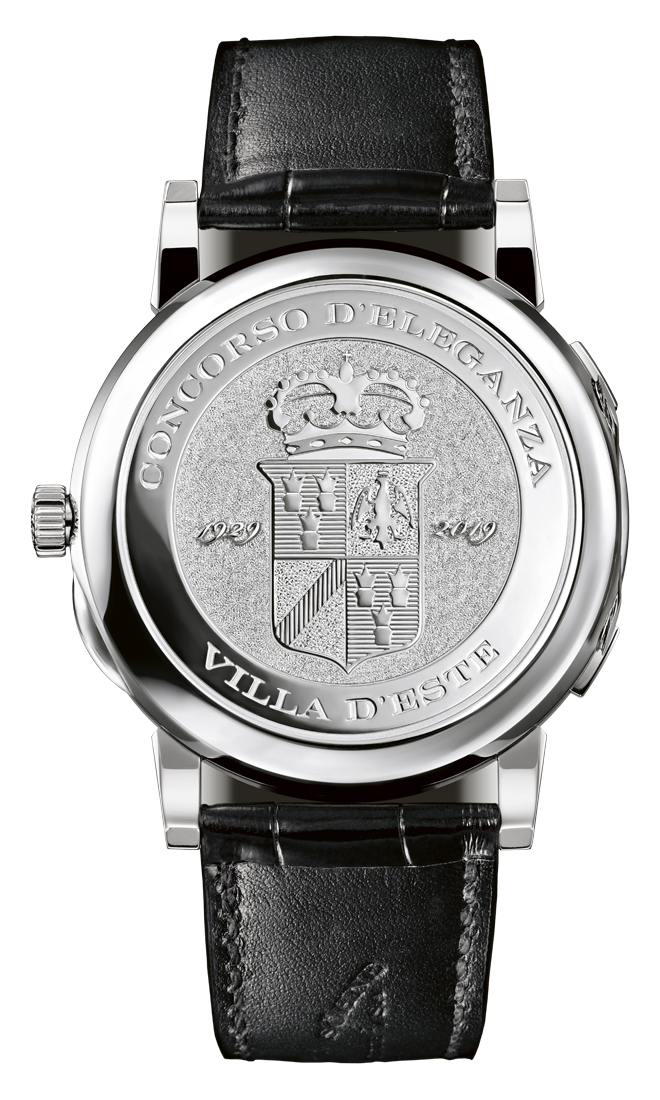 Since 2012, the “Como Edition” is the horological equivalent to the competition’s “Best of Show” car, award by  A. Lange & Söhne CEO Wilhelm Schmid to the winner, underscoring the undeniable synergy between classic cars and fine mechanical watches – each, an object beyond its own time and place, occupying the treasured genre of bonafide artpiece. 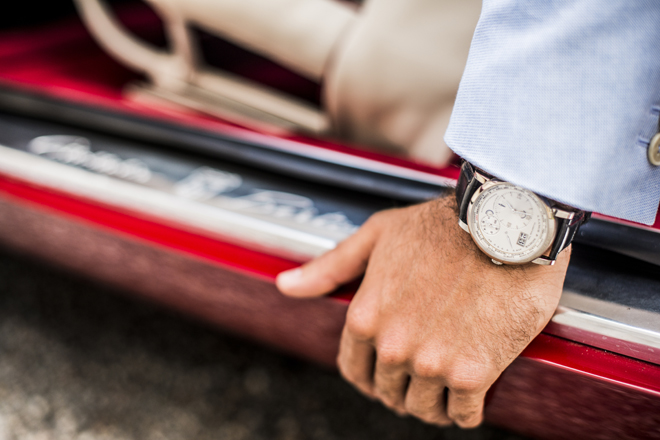 It’s a view echoed by classic car collector Duccio Lopresto, winner of the main prize in 2017 with the Lopresto family’s sensational 1957 Alfa Romeo Giulietta Sprint Speciale Prototipo, that as a vintage car enthusiast, it is his vision to break the barriers between art and cars and to bring these special machines into public consciousness and mass appreciation.

Lopresto was wearing the unique 2017 “Best of Show” LANGE 1 TIME ZONE “Como Edition” to complement his sharply tailored attire and the sensuous Alfa Romeo Giulietta Sprint Speciale Prototipo. Wilhelm Schmid: “This car is a one off, just like this timepiece that the watchmakers and engravers at A. Lange & Söhne have crafted for the ‘Best of Show’ winner.”