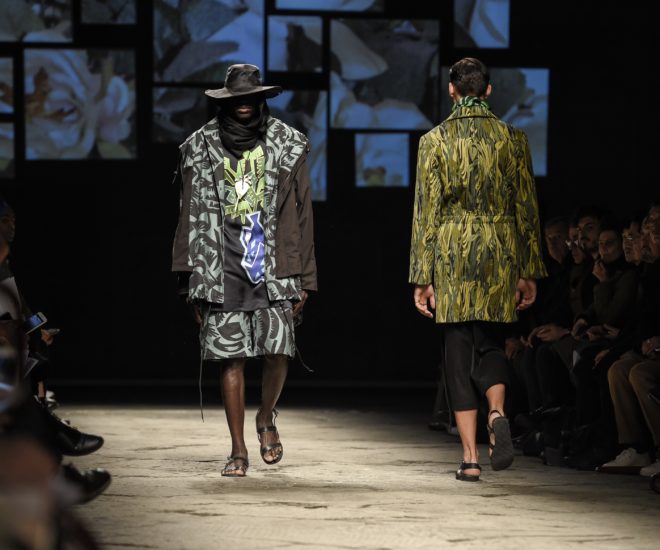 Welcome to fashion without borders, where refugees make themselves useful as fashion models. Asylum seekers from Mali and Gambia strutted down the catwalk January 14 at Florence’s prestigious Pitti Uomo exhibition, kicking off an initiative to school would-be migrant fashionistas in Italy’s top art.

In a fashion world first, farmers and construction workers who made the perilous journey by boat to Italy in May took center stage in Tuscany’s capital, modeling everything from sharply-tailored suits to tasseled jumpers and outlandish hats.

Despite initially appearing a touch overawed, they pulled off the trademark model walk – one even shooting the cameras a smoldering look worthy of a supermodel as he stopped to pose at the end of the runway.

The men, aged between 19 and 27, who could not be identified for legal reasons, were handpicked for the show from their reception centers by the ITC Ethical Fashion Initiative, which mentors young emerging designers from Africa.

“As we are in Italy and have a huge refugee crisis we also want to show that migrants are a resource,” EFI head and founder Simone Cipriani told AFP backstage before the event, which featured four collections by African stylists.

“We are setting up a training center for refugees and migrants in Italy to work in the industry of fashion and be enabled to go back home and set up their own businesses there,” he said.

The project is being launched with Lai-momo, an Italian association which raises awareness of migration issues and since 2014 has been involved in running a series of reception centers in and around Bologna, in Italy’s center-north.

Asylum seeker in a suit

Five long-legged men with chiseled jaws were chosen from the centers for the fashion challenge, with two taking part in a photo shoot on Wednesday and three walking the catwalk in a converted warehouse, along with professional models.

Nigerian-American designer Wale Oyejide, whose Ikire Jones brand plays on a juxtaposition of African figures and classical Western art, said working with the debutantes had been a perfect way to illustrate his fashion philosophy.

“Clothing is just a vehicle, I’m much more interested in discussing these issues… of migration, of borders being crossed.

“If I take an asylum seeker and put them in a suit, people perceive them in a certain way, which hopefully allows them to think of them as an equal human being, not as someone less than them,” he said.

As two of the first-time models apprehensively took their seats in the make-up studio, the third was given a one-to-one tutorial in how to speed up his swagger to match the pumping beats of the catwalk.

Lai-momo president Andrea Marchesini Reggiani said the plan was to tap into the Made in Italy resource to tackle one of the greatest problems plaguing those waiting for their asylum applications to be processed: boredom.

But while many of the 140,000 migrants who arrived in Italy in 2015 are stuck doing nothing in centers, “we already have small-scale collaborations with guests who are skilled in couture or design.

“The idea is to develop those skills in a dedicated laboratory, and maybe even produce garments as well,” he said.