From the whimsical to the zany, the several designers put their best feet forward and followed up by putting on their thinking tiaras… 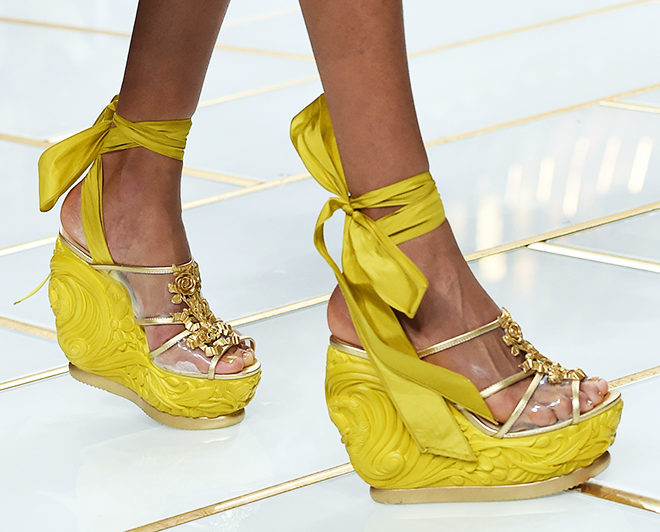 With the all eyes on the Spring 2016 Haute Couture runway shows, designers such as Chanel and Valentino also showcased their talent and attention to detail with a range of accessories. From the whimsical to the zany, the several designers put their best feet forward with Chanel kicking it off with an update to the round-toe pumps (see below). Pearly beads covered the cap while a curved cork wedge heel added some height to the footwear. Elsewhere, headdresses were a big trend. They ranged from Egyptian in style, seen at Jean Paul Gaultier, to Roman, as seen at Valentino (below), although several houses opted for fairytale-like crowns to create a romantic vibe. This was the case at Zuhair Murad, where metallic leaves decorated the models’ hairstyles, as well as at Elie Saab, where floral tiaras contributed to the enchanted feel of the collection. There were flashes of bling, such as the jewel-encrusted baseball caps seen at Elie Saab (below), and the humungous earrings on show at Guo Pei. There was also a nod to the quirky, with ornamental purses like the vintage cat bag seen at Ulyana Sergeenko stealing the show (scroll to the bottom for this wonder, which really deserves its own story).