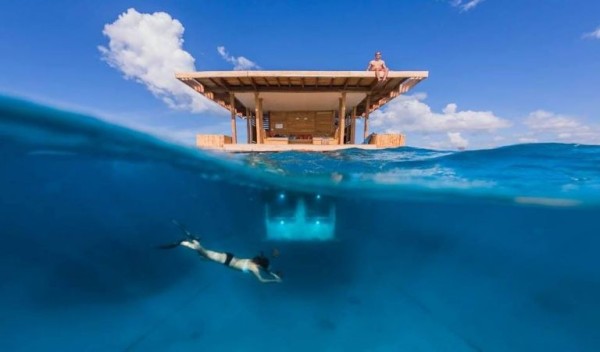 A new underwater hotel room has opened off the coast of Tanzania for intrepid, adventurous and ocean-loving travelers. Set off Pemba Island, also known as ‘the Green Island’ in Arabic, guests of The Manta Resort’s underwater room are dropped off at a self-contained hotel which literally drifts at sea. Guests can sunbathe on the top deck of their private island accommodations by day and dine on a lounge deck at water level. By night, they’ll then dive into the sea to access their hotel room, where they nod off amongst the fishes and their marine surroundings.

For an ethereal effect, the suite, which is built four meters below the surface, is lit by underwater spotlights to provide a backlit projection of the Indian Ocean’s tropical sanctuary.

Part of the experience also lies in its isolation and underdevelopment as a tourist destination. The most reliable way to access Pemba Island is by chartered flights from Zanzibar.

And while interest in the region is growing amongst divers for its unspoiled reefs, the area has yet to be paved by large-scale resorts and tourist crowds. The suite is designed by Swedish outfit Genberg Underwater Hotels, which opened its first underwater property in a Swedish lake near Stockholm in 2000.

The Utter Inn is a single room that lies three meters below the surface and contains twin beds and a table. Room rates at The Manta Resort start at $750 per person a night.