A 19th century Russian palace and St. Petersburg landmark has been restored as a luxury hotel bearing the Four Seasons brand name. 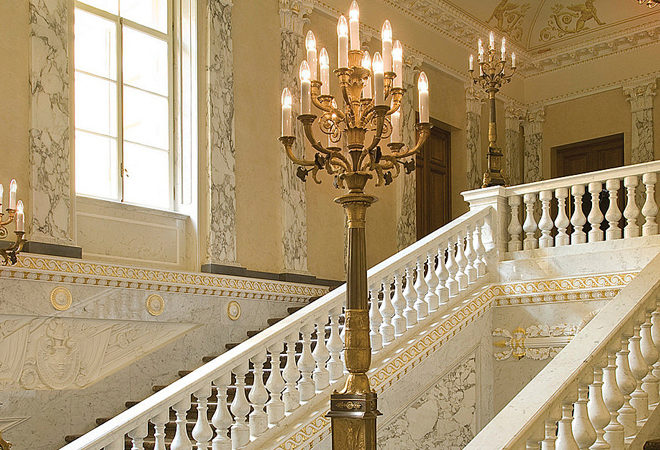 A 19th century Russian palace and St. Petersburg landmark has been restored as a luxury hotel bearing the Four Seasons brand name.

Known as the House with Lions, the palace —  which boasts a colorful history since ground was broke in 1817 — has been renovated to evoke the spirit of Imperial Russia.

After being delayed several times, the Four Seasons Hotel Lion Palace opened its doors yesterday to reveal the laborious restoration efforts made to resurrect the palace’s European-influenced esthetic.

Ceilings, granite columns and plaster details of the grand lobby have been preserved and restored, while the showpiece of the palace – the sweeping staircase to the second floor – is also original granite.

Rooms are swathed in luxurious fabrics and materials sourced from Europe such as velvet and silk, while fixtures and bathrooms include marble and granite.

Over the course of two centuries, the House with Lions — named after the two marble lions which stand guard outside the palace — served as the Ministry of War between 1827 to 1917.

Major hotel chains have set their sights on Russia for expansion, particularly with the 2014 Winter Olympics and the FIFA World Cup 2018 on the horizon.

The Hotel Indigo St. Petersburg-Tchaikovskogo, for instance, is slated to open this fall, and the Sheraton Moscow Sheremetyevo Airport Hotel is scheduled to open later this month.