Before we explore the top launches for 2016, we take a look at some superyachts that caught our eye in 2015. 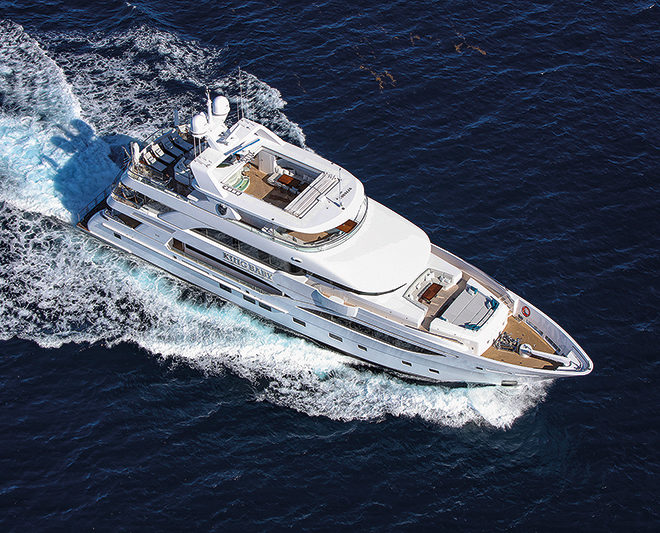 With the Singapore Yacht Show well underway, we take a look back at some of the best superyacht launches from last year. With the spending power in the region growing each year, several big names in the yachting industry have strengthened their presence in the East. With Asian shipyards going from strength to strength and Asian clients becoming more knowledgable and more adventurous, YACHT STYLE has put together a unique selection with an eye on the Asian market.

Rather than simply the largest or the newest, we have compiled a list designed to inspire and show the many facets of the yachting world. We present 10 superyachts – vessels generally 24m and above – from 2015 built in Asia, built for Asian clients and those that are deserving this discerning market’s attention. 2015 was a year that saw some extremely innovative projects and 2016 looks like it will be no different, as owners look to challenge the norms of design and efficiency; thus YACHT STYLE highlights 10 of the most boundary-pushing projects. Of course, innovation isn’t possible without imagination and inspiration, so we also look at five unique superyacht concepts from design studios around the world that would hold appeal for the Asian market. LOA: 44.2m
Year: 2015
Builder: Feadship
Exterior Design: De Voogt Design
Interior Design: Bannenberg & Rowell
Naval Architect: De Voogt Naval Architects
With tidy design solutions and sophisticated engineering, the beautifully refined Moon Sand is what happens when Feadship combines forces with clients who are as passionate and exacting as it is. A labour of love with experienced Asian clients, this is a yacht that packs in a lot of design innovation for its size. The contraflow swimming pool on the aft deck, for example, is a Feadship first, with the team engineering a system that lowers the deck and fills the pool in 20 minutes. When it came to the interior concept, the clients worked
closely with Bannenberg & Rowell to create elegant spaces suited to socialising and full
of bespoke pieces. LOA: 43.3m
Year: 2015
Builder: Royal Huisman
Interior Design: Rhoades Young
Naval Architect: Germán Frers
Sea Eagle signals Royal Huisman’s first ever delivery to the Asian market. Designed and engineered for Taiwanese businessman and philanthropist Dr Samuel Yin, this sloop effortlessly balances performance and style. Destined to take her owner around the world, participating in the occasional superyacht regatta along the way, Sea Eagle will be as at home lazily cruising in South East Asian waters as she will be racing head to head against sailing veterans in the Caribbean.

LOA: 32m
Year: 2015
Builder: Monte Carlo Yachts
Exterior Design: Nuvolari & Lenard
Interior Design: Nuvolari & Lenard
Naval Architecture: Monte Carlo Yachts
The cover star of YACHT STYLE Issue 33, MCY 105 is the new flagship for French-Italian shipyard Monte Carlo Yachts. Built for a hands-on Hong Kong owner and revealed at a private event in Venice in July 2015, this chiseled yacht is all the more impressive for her condensed six-month build time. MCY’s advanced construction methods enable it to offer highly customised projects in significantly less time than it would take most yards to deliver a production project of this magnitude. And crucially, this yacht feels anything but rushed: sporty, spacious and stylish, she is a credit to MCY’s fresh approach to yacht building. LOA: 42.8m
Year: 2015
Builder: Sanlorenzo
Exterior Design: Francesco Paszkowski Design
Purchased at 2015’s Monaco Yacht Show (reportedly by an Asian client), Moka marks a new direction for Sanlorenzo as the first explorer from its 460Exp range. While her lines are that of a classic expedition yacht, Moka still has all the style you would expect from an Italian shipyard. The shallow draft will make sure that few places are off-limits and she will be able to cruise for long periods with low fuel consumption. Inside, contemporary cool style seamlessly blends with comfort, creating welcoming spaces that anyone would happily watch the world go by from.

LOA: 30.48m
Year: 2015
Builder: Ocean Alexander
Exterior Design: Evan K Marshall
Interior Design: Evan K Marshall
Naval Architect: Ocean Alexander
One of two OA100 models to be delivered in 2015 by Taiwanese builder Ocean Alexander, Sea ’N Sea was sold to her owner at the Fort Lauderdale International Boat Show and is another example of the evolution of the highly customised production yacht. By bringing in designer Evan Marshall, typically known for his larger custom projects, the yard has created a pocket-sized superyacht that takes the yard’s aesthetic to the next level while maintaining the OA ‘look’.

LOA: 19.5m
Year: 2015
Builder: Lagoon Motoryachts
Exterior Design: Nauta Design
Interior Design: Nauta Design
Naval Architect: VPLP
With an LOA that is just nipping at superyacht status heels, the Lagoon 630 has been gaining a steady following since its appearance in 2014 and is worthy of a mention. Behind this catamaran is a design and engineering dream team: VPLP, known for developing hyper-fast sailing multihulls like S/Y Comanche, and Nauta Design, the designers of countless sailing and motoryacht projects from 10m to the 180m M/Y Azzam. Offering superyacht style, reliability, stability and low fuel consumption plus real value for money, this is an attractive option for newcomers to the yachting lifestyle who still want something with real pedigree. It is no wonder that brokers have found the Lagoon 630 to be particularly popular with the Asian market in 2015. LOA: 32.2m
Year: 2015
Builder: Sanlorenzo
Exterior Design: Nauta Design
Interior Design: Nauta Design
Naval Architect: VPLP
2015 saw Sanlorenzo energise its efforts in Asia. As well as opening a Shanghai showroom, it debuted the SL106 Special Edition at the Hong Kong Gold Coast Boat Show, designed and built specifically for the greater Chinese market, with Simpson Marine selling it to an Asian buyer later in the year. This yacht keeps in mind that boats are typically used as much for business as pleasure in this region and that clients here take an unobtrusive approach to ownership. Partitions and multifunctional spaces, a round dining table and auspicious fish tank, separate crew passages and extra privacy – this is a yacht that understands its audience.