Now in Hong Kong as well as Shanghai, the Prestige 520 from France is an innovative successor to the best-selling 500, which boasted record global sales.

Prestige had a serious challenge when creating the 520. Sure, the French builder had a blueprint for success because the model was designed to succeed the 500, the world’s best-selling flybridge in the 50ft range with over 450 units and counting. 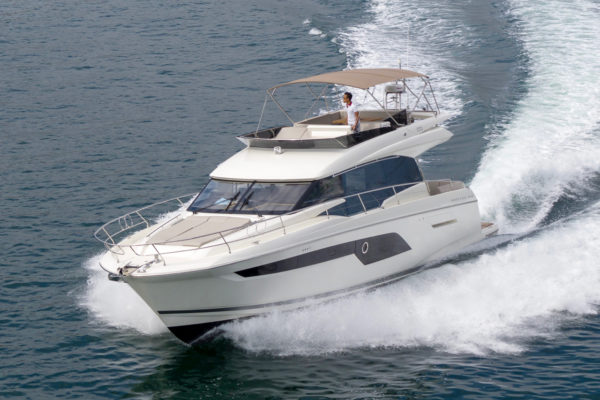 However, the challenge for Prestige was trying to improve upon that winning design without losing the essence of what made the 500 so popular, including the three-cabin layout with a private staircase for the master suite, large interior volume and a great flybridge.

The 520 has proved a worthy successor, with Italy’s Garroni Design – taking care of both exterior and interior – cleverly tweaking the lines and layout to create a yacht with more and better-arranged space on all three decks, despite working with a similar-length hull.

Owners appear convinced, with over 120 units sold in the 18 months since its premiere, a solid response considering the 500 was at Boot Dusseldorf more than eight years ago and its last units are still being built today.

Visually, the new model retains the same clean lines, but features one long strip of glazing along each side of the hull instead of multiple windows and about 50 per cent more glazing overall, which becomes more apparent when you step inside.

It also has some key options that weren’t available on the 500 including a hardtop, although the first 520 in Hong Kong instead makes use of a bimini. (The model is also available in a Sport version, with a sunroof instead of a flybridge, although this misses half the fun.)

A hidden change is Prestige’s move to resin-infusion hulls, which adds strength and rigidity and slightly reduces weight, and is also used for much of the 520’s deckhouse and flybridge.

Otherwise, new features and improvements become apparent as soon as you board the hydraulic swim platform, which is much larger than on its predecessor and can also go deeper into the water. The 520 is among the first models to fit integrated steps, which are flush when the swim platform is raised and cleverly stagger as it lowers.

There’s also the option of a tender garage designed to house a Williams Minijet 280 or a single crew cabin in the stern. 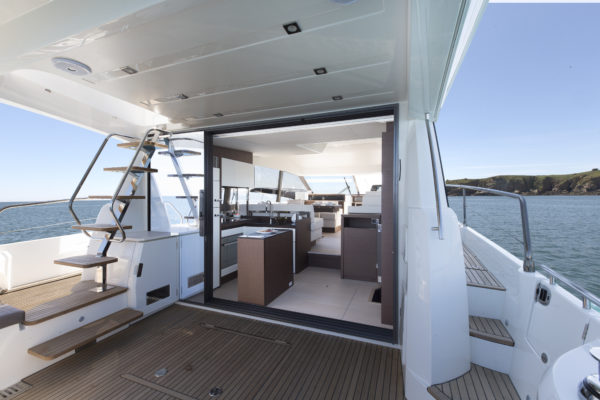 Teak decking is used on the swim platform and also the cockpit, which is accessed by starboard stairs and is a much-improved offering compared to the 500. Instead of a small sofa, the 520 has a much greater seating area with a big L-shaped sofa that links to the flybridge stairs to port.

The cockpit table can be square, with drinks holders underneath on each side, or double in size for dining by opening up the outside leaves. The cockpit also has a useful drop-down aft shade, a feature retained from the 500 and particular popular in sunny climates.

The saloon doors slide behind the flybridge stairs to reveal a large split-level saloon, with aft galley to port. There’s galley access from both the cockpit – although it’s tight – and central passageway, either side of a hip-high central shelving unit now wide enough to store plates.

Much of Camillo Garroni’s best work has been in the saloon, where a series of changes have increased the size and improved the layout, while 6ft 9in of headroom raises the feeling of comfort and volume.

“Camillo’s strength is optimising volume,” says Paul Blanc, Managing Director of Beneteau Group Asia Pacific. “He sees where moving 5cm here can make a huge difference there, or how to gain extra headroom. We managed to put quite a lot in a 50ft hull on the 500, but this is another level.”

Shifting the master-suite staircase aft by 50cm was among major moves, while minor tweaks included moving the sliding doors back by 8cm. In all, the length of the saloon has been extended by almost 2ft, enabling it to offer a much longer seating area than on the 500. 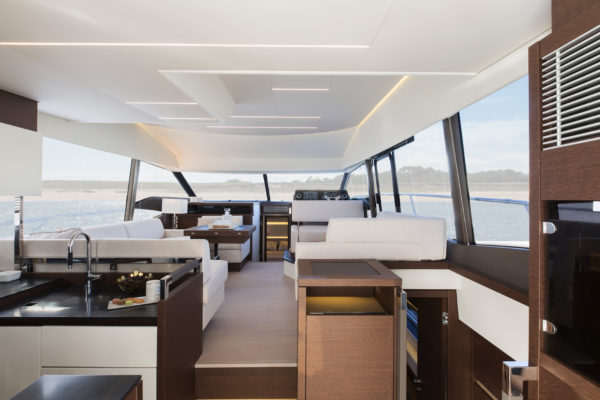 Forward and up a step, the lounge features the main C-shaped sofa to port and an adjustable table, which can be electrically raised or lowered, and fold out from a square to double in size to a 4ft long dining table. The large TV is hidden, emerging from below the windshield.

There’s an L-shaped sofa to starboard and it’s on this side where you’ll find two key new features. Arguably the interior game-changer is the adjustable helm seat, with a backrest that can slide forward electrically to create two more guest seats, enabling wrap-around seating for 10 people.

“The helm seat can be in the guest position a lot of the time because most of the driving in Asia is done on the flybridge, with the lower helm mainly used if the weather’s not great,” Blanc adds.

The other new feature to starboard is a lateral door between the helm seat and sofa, which offers side-deck access and ventilation.

A larger-scale change is the increased height and re-shaping of the windows, which start much lower than on the 500, so combine with the low backrests to expand the outside views and natural light, creating a very bright, inviting space.

Not everyone is a fan of the low backrests but the use of cushions can alleviate discomfort in one of a few small design compromises to improve layout, light and headroom.

For owners, the aft staircase to the master suite remains a treasured asset, and this reason alone puts the 520 and her predecessor in a class of their own for this size category.

“Prestige was the first to include a private staircase for the master cabin in a boat of this size and in fact, anything under about 70ft,” Blanc says. “Now, it’s a feature you may only start to see at around 60ft in some other brands.” 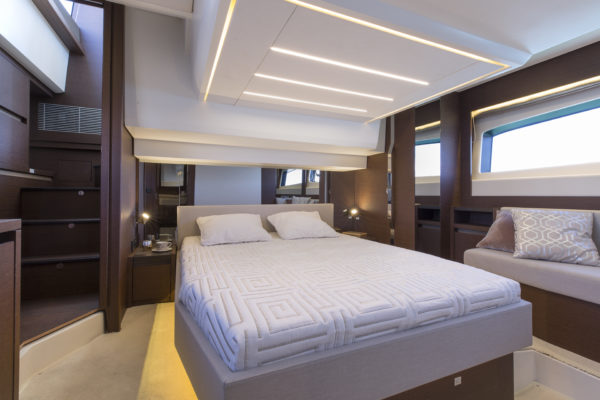 As you walk down the starboard steps and into the room, the ceiling height cleverly staggers in parallel with the floor levels, with headroom comfortable for most until at the foot of the bed, where it’s almost exactly 6ft.

The room spans the yacht’s beam of 4.5m (14ft 9in), has a long window with porthole on either side and a forward-facing bed with fitted side tables backed by mirrors. The bed faces a large Samsung TV, while LED strips provide elegant lighting above the bed.

The starboard side has a low storage cabinet and a well-designed bathroom, featuring a slightly raised toilet below the window and porthole, a forward sink and a walk-in, step-down shower.

On the other side of the bedroom, up a step, is an impressive walk-in wardrobe with foldable doors, as well as a long sofa, although options like a dinette are possible.

Like much of the interior, the room is finished in Grey Oak from Alpi, an Italian company that produces reconstituted wood from sustainably grown trees. It looks good and keeps the light atmosphere felt throughout the yacht.

TWINS OR DOUBLES FOR GUESTS

The two guest cabins, accessed by the forward staircase, have the same high-quality decor. The VIP in the bow has scissor berths, so can split from a double to twins. Long windows either side provide good natural light, while a skylight can let in even more if the central sunpad on the foredeck is removed.

Compared to the master, there’s an extra inch of headroom at the foot of the bed, where drawers supplement the storage and hanging areas on both sides, which feature good headroom. There’s a small TV by the portside cupboard, which is next to a vanity desk that’s almost redundant, as the mirror can’t be angled enough for a lady sitting on the bed to see her make-up.

The bathroom to starboard doubles as a VIP en-suite and dayhead. It has good headroom, but is more compact than the master en-suite, with foldable shower doors. The sink and cabinets are well finished, and there’s lots of storage space behind the mirrors.

Portside is the guest cabin, which has twin beds that can slide together to become a double – and the most headroom of all the cabins. There’s a tall cupboard by the door and a step down to the bedside, while the ceiling is lower above the top-half of the bed, yet still not blocking views from the bed through the long window. A TV is optional.

One of the clever new features is hidden in the lower-deck hallway, where the lower part of the forward staircase can be pulled up to reveal a space that can be used for a washing machine, wine cellar or second fridge. It’s a clever use of space that’s typically found on the smaller Beneteau and Jeanneau motoryachts, where space is at a premium.

“We have a really good architect,” Blanc says. “It’s part of the Beneteau Group’s DNA to maximise space and options within a boat.”

If the indoor offerings are impressive throughout, the pick of the outdoor zones is certainly the flybridge, billed ‘XXL’ by Prestige. The aft half is dominated by two sides of comfortable seating aft and starboard, and a large table.

The helm station to port has a double bench seat situated in front of an outdoor galley, which features a barbecue grill, sink and refrigerator. Overall, it’s just a great flybridge for this size of yacht, with enough space and zones to host over a dozen people.

The foredeck is more modest and is essentially a triple-width sunpad with adjustable backrests. A small bimini can create a very cosy, even romantic hideaway, but the area doesn’t compare with competitors offering seating areas and tables. It’s among a few small compromises needed for such a voluminous interior.

Performance wise, Prestige has retained the IPS system and twin 435hp Volvo Penta diesels used on the 500, as the benefits outweigh any sacrifice in power.

The smaller engine room required is a key reason for the space in the three guest cabins, while other plusses include price, fuel economy and joystick steering for berthing. There’s even an option for a third joystick station starboard side of the cockpit, ideal for visibility, proximity and communication in marinas.

With only one engine option, the yacht has a top speed of 27 knots and cruises at 22, each figure a couple of knots lower than on the 500. However, this is a bigger-volume yacht and can also house a Seakeeper, a new option fitted on the unit in Hong Kong and popular in Asia.

Its performance may be middling, but the Prestige 520 is notably more affordable than its Italian and British rivals, while offering living space and functionality on all three decks that most of its competition – including its predecessor – can’t compete with.