Fountaine Pajot has produced over 4,000 catamarans since 1976 at its historic base in La Rochelle, two hours’ north of Bordeaux, and was among the first production catamaran builders to enter the motor yacht sector, in 1998. Fountaine Pajot is scheduled to stage the world premiere of its flagship motor yacht, Power 67, at this year’s Cannes Yachting Festival

Like Aquila, Fountaine Pajot considers monohull motor yachts the main competition for their Motor Yachts range, which comprises the MY 37, MY 40, MY 44 and brand-new Power 67.

Steven Guedeu, Group Sales Director, says: “Today, our competitors are the monohull motor yachts, but we offer a lot more volume. Our MY 44 matches with 60ft monohulls for the space.”

The French brand recently launched its flagship Power 67, which impressed in sea trials and has a range of 1,700nm, with twin 435hp engines and 4,000 litres of fuel. The unit will be used by her owner prior to the model’s world premiere at Cannes in September.

The yacht has a 36sqm cockpit, 32sqm flybridge, optional jacuzzi in the foredeck and is available with the galley down or in the saloon. The owner’s version has a 22sqm private apartment equipped with large dressing room and an Italian-style bathroom with two washbasins.

“The Power 67 meets a real demand for luxury, space, design, stability and performance with low consumption, plus she’s priced three times lower than that of a monohull of the same size,” Guedeu says. “She is a real villa, ideal for cruises and entertaining guests.” 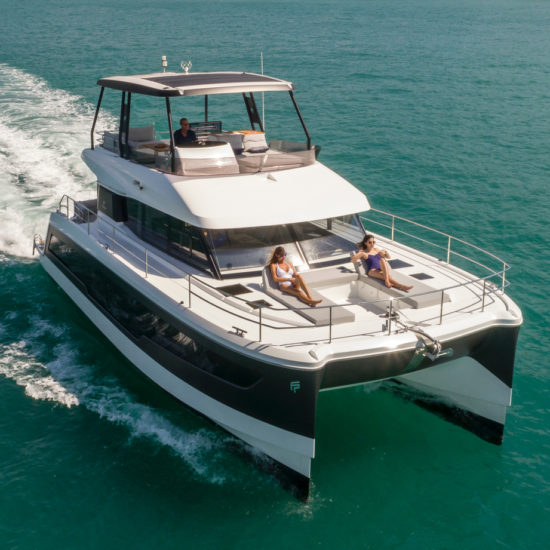 The new model is a huge leap for a Motor Yachts range that features designs by Italian designer Pierangelo Andreani, who has worked with the yard for four decades. The Power 67 is the sister ship of the Alegria 67 sailing cat, which made its Asia debut at last year’s Singapore Yacht Show along with the MY 40, three months after the latter’s world premiere at Boot Dusseldorf.

Powercats currently make up about 20 per cent of Fountaine Pajot’s business and Guedeu expects that to grow slightly, but not at the expense of their sailing cats. “We eventually expect a balance of about 70 per cent and 30 per cent, and for our sailing and motor yacht markets to keep growing in parallel,” he says.

Asia has become an increasingly important market for the brand and last year Yacht Sourcing in Indonesia joined a dealer network that also includes Multihull Solutions in Thailand, Asia Yachting in the Philippines – where an MY 40 is expected to arrive by late summer – Speedo Marine in China and China Pacific Marine in Hong Kong.

“Fountaine Pajot has always considered Asia as an ideal cruising area. Our market share there has increased well in recent years, with development in all areas for the past two years,” Guedeu said.

The yard is also committed to reducing the marine footprint of its catamarans and proposes the inclusion of renewable energy sources on all of its models, offering Eco-Cruising and Smart-Cruising options.

Bali catamarans are produced in the Catana Group’s facilities in Canet-en-Rousillon on France’s south coast and La Rochelle, while the group also has a factory in Tunisia. Bali emerged as a cruising catamaran offshoot of Catana in 2014 and has proved spectacularly successful, cooperating with Dream Yacht Charter.

The brand only joined the motor yacht market in 2019 with the premiere of the Lasta-designed 4.3 MY at the International Multihull Boat Show in La Grande Motte, but it was a strong start.

Boris Compagnon, the company’s Sales Director, says: “We entered the powercat market after we saw a lot of people never use the sails when chartering a production catamaran.

“The powercat is also a way to attract newcomers who don’t sail. They want to cruise at reasonable speed with reasonable consumption. Powercats are also cheaper than powerboats of the same size and offer a lot more volume and deck space.” 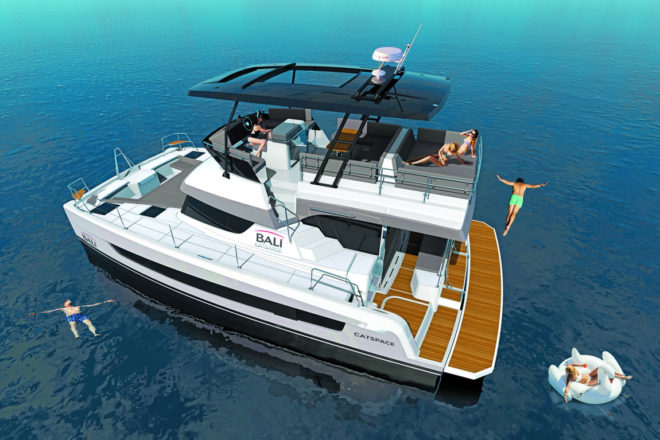 Bali is developing the Catspace MY, which features an immense flybridge

As its sailing models from the 4.1 to 5.4 show, Bali has a track record of good design and the 4.3 MY showcased the brand’s signature features developed by Catana Group founder Olivier Poncin – the solid foredeck and the ‘tilting’ cockpit door that lifts to completely open up the saloon to the outside.

Powercats currently only make up about 10 per cent of Bali’s production, but the brand is now developing a second motor yacht, the Catspace MY, after the sailing cat of the same name debuted at Boot Dusseldorf this year. Also designed by Lasta, the Catspace MY is distinguished by a surprisingly large flybridge that extends as far back as the aft end of the hull.

Layouts include a three-cabin version with an owner’s suite in the port hull or four cabins with additional bunks available in each of the forward rooms, for 10 berths.

Like Aquila and Iliad, Austrian company Silent-Yachts only builds power catamarans, except that its models are based on solar-powered electric propulsion. 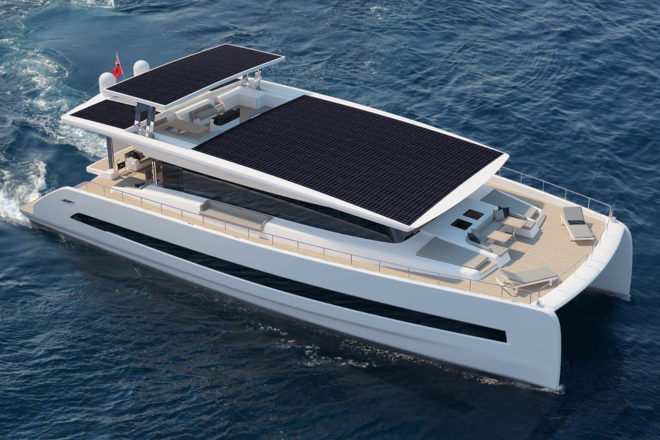 Silent-Yachts is building its 80 in Italy; in April, the Austrian company announced that it had sold six units of its solar-electric flagship

Silent debuted its 55 model at Cannes in 2018 and is currently producing its new 60 in Thailand and Italy. It’s also building its flagship 80 in Italy, announcing six sales by April, while also developing an 80 Tri-Deck featuring a flybridge with 90sqm of living space.

Described as “virtually maintenance-free”, the brand’s catamarans use solar power via special panels on the flybridge, li-ion batteries – like in Tesla cars – and electric motors developed by Silent Yachts, enabling unlimited range without noise or fumes. The cats are principally outfitted with lightweight, recyclable materials, although the interior layout and decor are customisable.

Michael Kohler, founder and CEO of Silent-Yachts, said: “I built my first solar-powered prototype in 2009, which is still operational today. The current owner hasn’t used the generator for the last two years.

“Silent boats are generally self-sufficient, like a sailing yacht is for cruising, but the main advantage we have is that we can store sun-generated power in the batteries. We also have a generator on all of our boats as a safety issue in the rare case there’s simply no sunlight for a few days or any other special circumstances.” Solar power also sustains the household items on board like air-conditioning, lighting, refrigeration, cooking, AV equipment and on-board systems. As well as solar technology, Kohler is also a firm believer in the increasing popularity of power catamarans.

“At the Cannes show, there were only a few power catamarans  five years ago, and these days there are over a dozen. Multihulls are multiplying and the trend is definitely going towards more comfort and luxury – and we can deliver this luxury without using a generator.”

Silent is producing some of its 60 units at the Bakri Cono shipyard in Rayong near Pattaya in the Gulf of Thailand, which has experience of producing solar-powered catamarans.

The Silent 60 is available with a range of accommodation layouts, from three cabins up to six cabins. The shipyard has also created the design and moulds for its own H70 model, a development of its Heliotrope 65. 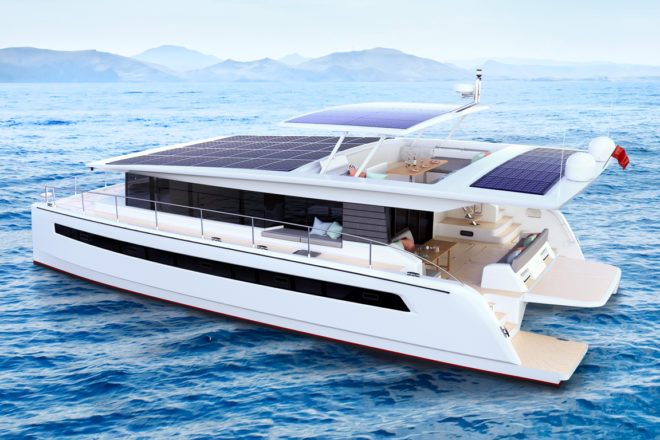 The Silent 60 is being built in Thailand by Bakri Cono

In conclusion, Leopard’s Kit Chotithamaporn says multi-hulled motor yachts “still represent a small portion of the overall motor yacht market” but that this niche sector will continue to grow in demand, just as sailing catamarans have.

“Powercats have steadily increased in popularity for charter and more recently for private owners as well. Firstly, there are the obvious reasons like space, comfort and stability, and that they’re a lot more economical than monohulls,” he says.

“Secondly, the products have continuously improved in terms of design outside and inside, ergonomics, interior finish, luxury and the level of equipment on board. Finally, in terms of price per cubic foot, they offer tremendous value.”

If sales in the US are any indication, powercats – the niche within a niche – could eventually become as mainstream as their sailing sisters.