Twelve Leopard 51 and nine 43 powercats sold in Asia, while The Moorings expands global charter destinations and adds to its diverse fleet.

Leopard Catamarans has sent one of the last Leopard 51 Powercats in production to the Philippines, where it’s being delivered to a “very excited new owner”, according to Kit Chotithamaporn, Leopard’s Yacht Sales Manager for Asia. The 51 PC was sold through Rayomarine, the catamaran brand’s exclusive dealer in the Philippines. 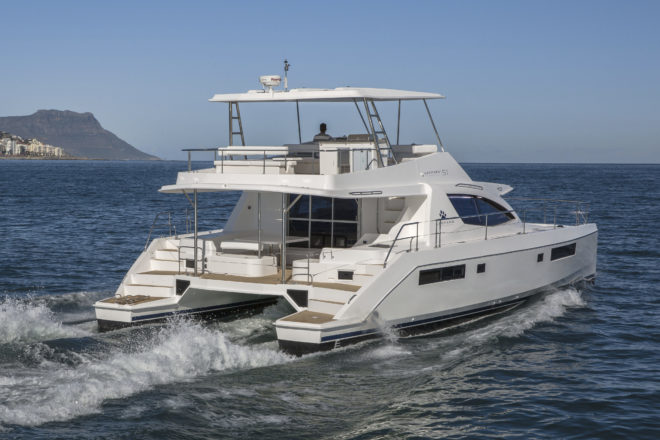 Leopard describes the 51 PC as ‘the most successful powercat of all time’, with over 135 hulls built and sold including 12 to Asia, proving one of the region’s most popular twin-hulled motor yachts. Features include an outstanding flybridge, forward saloon door, attractive forward cockpit seating area and a top speed of 24 knots, plus a range over 1,000nm with 1,500-litre fuel tanks.

The 51 PC is being succeeded by the new 53 Powercat. The first hull hit the water in Cape Town last November, while the Asia premiere of the 53 PC will be held at the Singapore Yacht Show from March 19-22.

In Thailand, a Chinese owner has taken over a new Leopard 43 Powercat in Phuket. The 43 followed on from the 51, with large outdoor living spaces including a big flybridge and access to the foredeck via a forward saloon door. The 43 PC has also proven popular in Asia, with nine hulls delivered across the region.

“Year on year, the sales of Leopard Catamarans in Asia have continued to grow and 2019 was no exception,” Chotithamaporn says. “Seeing the sales performance of Leopard powercats in Asia over the last few months provides confidence to know that the powercat market continues to gain momentum in Asia. But more than that, the catamaran industry as whole is proving to be successful and growing year after year.” Meanwhile, The Moorings, which has a Thailand operation based in Phuket, has expanded its global operations to a new partner base in Paraty, Brazil, where a fleet of three and four-cabin monohulls have been available for charter from January.  Surrounded by towering jungles, this cruising region features bays peppered with islands and world-famous beaches, with Paraty adding to The Moorings’ 20-plus charter destinations worldwide.

Parent company Travelopia has been investing heavily in The Moorings charter operations in 2019 and 2020, including in the fleet, marina infrastructure and IT. New yachts include the four-cabin Moorings 534PC – the same model as the Leopard 53 Powercat – that will charter in the British Virgin Islands from May and the Bahamas in the autumn.

“We are excited to usher in this new era of Moorings powercats,” said Josie Tucci, VP of Sales and Marketing. “The new yachts combine the many advantages of catamaran design – like space and manoeuvrability – with stunning, modern interiors that appeal to today’s charter guest.”

South Africa’s Robertson and Caine has built catamarans for The Moorings charter company since 1994 and since 2000 has simultaneously developed the same models, with an extensive option list, under the Leopard brand for private ownership. Robertson & Caine exclusively builds these yachts for THL Marine, the umbrella that both brands operate under.