Princess will again have the largest display at Boot Dusseldorf, with 10 yachts and a mock-up, while other builders also host big stands.

Traditionally the biggest exhibitor at Boot Dusseldorf, Princess Yachts had planned to stage the world premiere of its much-anticipated X95 ‘Superfly’ at the 51st edition from January 18-26. Unable to proceed with that plan, the Plymouth builder is instead displaying a life-size mock-up of the yacht’s main deck, transported all the way from its South Yard facility. 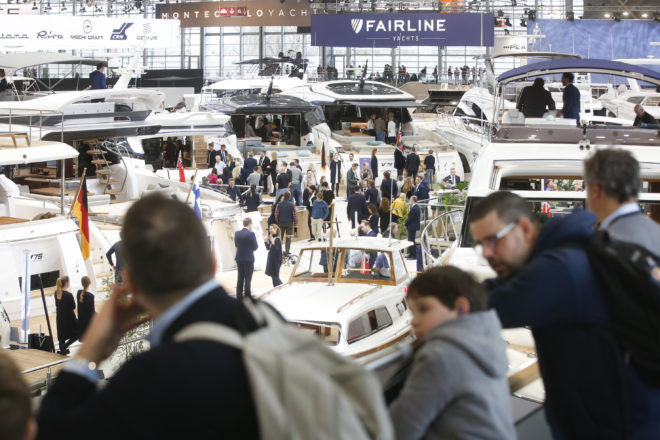 Fellow British yard Sunseeker will stage an eight-boat line-up at Boot Dusseldorf headed by the world premiere of the Manhattan 68 and show debuts of the Hawk 38 and Predator 60 Evo, alongside a Manhattan 52, a 74 Sport Yacht and three Yacht models – 76, 86 and 95.

Fairline will stage the world premiere of its Targa 45 GT, while its other boats include a Squadron 50 and 68, and an F//Line 33, the latter two models unveiled at the Cannes Yachting Festival last September. The Pearl 62 is among other world premieres from British brands and will sit alongside a Pearl 80 (hull seven). 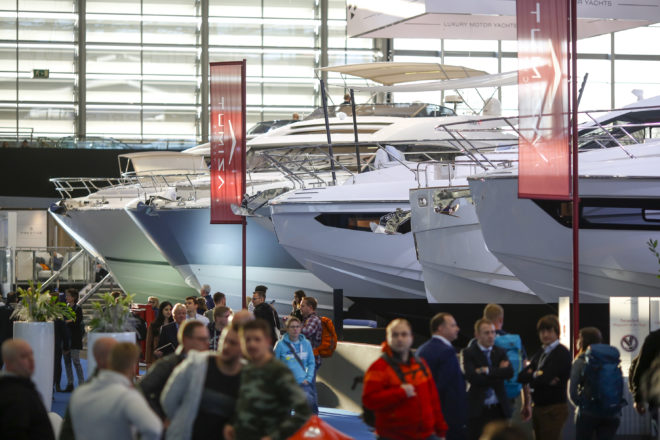 Italy’s Azimut will showcase six yachts including its new Grande S10 (Review, Issue 50), the 29m flagship of the S Collection and the largest yacht the brand has taken to Boot Dusseldorf. The builder will also show a new S6 Sportfly, which features a lounge area and second helm station on the roof, with access provided by a retractable stairway.

Azimut will also exhibit the 78 and 72 – featuring a new interior design – from its Flybridge Collection, an Atlantis 45 and a Magellano 53.

Marco Valle, CEO of Azimut Yachts, said: “Boot Dusseldorf is an increasingly important event. That’s why we’ve chosen to take some of our most successful models to Dusseldorf, including several novelties, and why we hope to be able to report the same positive feedback that has got the season off to such an excellent commercial start.”

Ferretti Group’s display comprises the world premiere of a Pershing, a 48 Wallytender, a Dolceriva (48ft) and 90’ Argo from Riva, and Ferretti Yachts 670 and 780 hulls. 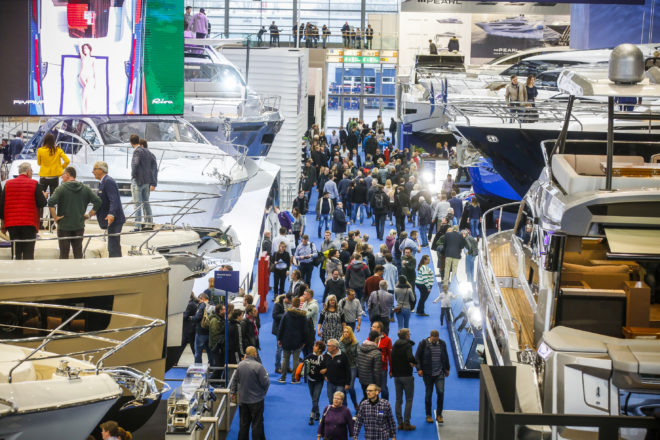 Boot has attracted about 250,000 visitors in recent years

Also from Italy, Sanlorenzo will stage the world premiere of the SL96Asymmetric, with an exterior by SL102Asymmetric designer Bernardo Zuccon and an interior by Laura Sessa. The builder will also show an SX76.

Absolute is displaying its Navetta 52 and the 47, 50 and 62 from its Fly range, while Arcadia will show its 78ft Sherpa XL at Boot Dusseldorf.

French builder Lagoon is showing its 42 and 46 sailing catamarans, while sister yard CNB will exhibit a CNB 76 (hull 24) sailing monohull. Finnish builder Swan will display a 48 and a ClubSwan 36, both sailing yachts making their show debuts after launching in 2019.