Personalized and with a little something extra — check out these superyachts that push the limits. 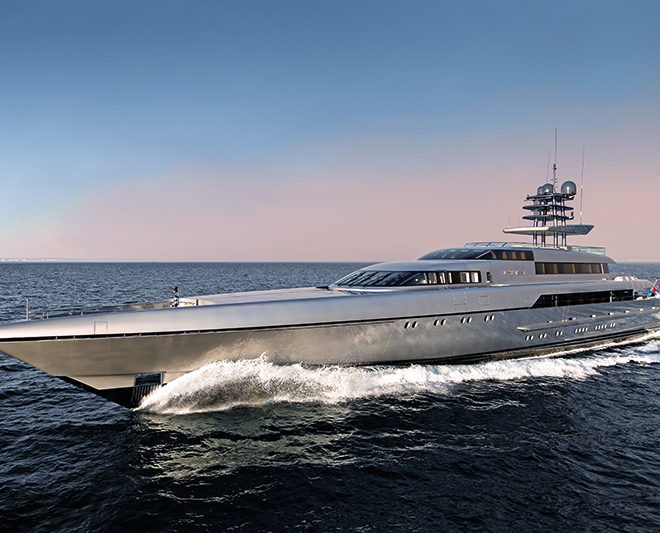 Conforming with the norm — where’s the fun in that? It wouldn’t be a superyacht if it was normal and that is exactly why the following 10 yachts are our picks for this list.

LOA: 77m
Year: 2015
Builder: Silver Yachts
Exterior Design: Espen Øino
Interior Design: Vain Interiors
Naval Architect: Espen Øino
Yachts like Silver Fast are destined to lure in a new breed of owner. Beyond her sexy Espen Øino profile and cosy but cool interior, she is a fast, functional and mould-breaking superyacht; the largest and fastest aluminium yacht with conventional propulsion, in fact. Sleek and lightweight, she’s economical at high speeds (her maiden voyage from Western Australia to Sri Lanka, some 3,200nm, saw her average 17 knots and just 105 gallons per hour of fuel), she handles challenging conditions with ease and her shallow draft means she can access places that most of her size cannot.

LOA: 43.9m
Year: 2016
Builder: Kingship Marine
Exterior Design: Horacio Bozzo
Interior Design: Horacio Bozzo
Naval Architect: Axis Group Yacht Design
Conceived for the kind of owner who is looking for a low-impact yacht to for world cruising, Grand Voyager is the very first yacht under 50m being built to Green Star Plus standards, which means exceeding the minimum levels set by international regulation on environmental protection. Currently in build at Kingship Marine’s shipyard in Southern China, this project is looking for a conscious buyer and will be ready in 12 months. LOA: 141m
Year: 2016
Builder: Dream Ship Victory
Exterior Design: Ken Freivokh Design
Interior Design: Ken Freivokh Design
Naval Architect: Dykstra Naval Architects
Bringing together the same team that designed the iconic S/Y Maltese Falcon, Dream Symphony will be the largest wooden sailing yacht and the second largest sailing yacht in the world, coming second only to Nobiskrug’s 142.8m Sailing Yacht A. Building a 141m yacht out of wood is a daring and sophisticated task, a journey that began in 2010, and has required a dedicated 200m construction shed be built at the Aegean shipyard.

LOA: 88.8m
Year: 2017
Builder: Pride Mega Yachts
Exterior Design: Rainsford Mann Design
Interior Design: Sinot Design Associates
Naval Architect: Azure Naval Architects
Set to be the largest superyacht ever built in China and the only Chinese-built yacht in the top 100, Pride Mega Yachts’ M/Y Illusion will be the first project built solely by the yard and thus the first real showcase of its capabilities. Details are limited, but her powerful profile comes from the drawing board of Rainsford Mann Design and inside, the floor to ceiling windows will flood the spacious, Asian-inspired interior with light. LOA: 63m
Year: 2015
Builder: Sunrise Yachts
Exterior Design: Espen Øino
Interior Design: Focus Yacht Design
Naval Architect: Unique Yacht Design
At 63m with a gross tonnage of 1,463, Irimari is the largest yacht to come from Sunrise and to be built in Turkey by volume. Designed for transoceanic range and long-distance cruising, she has been created as a veritable haven for her owner. Large entertainment spaces, high-tech gaming and cinema rooms (there is a five-metre video wall and an interactive games room on the top deck), copper tones, complementary woods and bespoke pieces make this a superyacht you would happily never leave. A second 63m based on this platform is due for delivery later this year.

LOA: 142.81m
Year: 2016
Builder: Nobiskrug
Exterior Design: Philippe Starck
Interior Design: Philippe Starck
Naval Architect: Dykstra Naval Architects
Innovative and challenging, Andrey Melnichenko’s latest superyacht project is already just as renowned and divisive as his M/Y A. Shrouded in secrecy, this leviathan will be the largest sailing yacht in the world, featuring the world’s tallest carbon yacht masts. She has eight decks, free-floating spiral staircase and multiple elevators, a touch-and-go helipad and a underwater viewing pod will be moulded into the keel, offering guests a subaquatic view of the props through 30cm of glass.