NYT: An industrial site in Lathrop, Calif., east of San Francisco, where the self-appointed Shorty Air Force has identified a large collection of Tesla cars. This view was shot in late July. Credit: Machine Planet

In a cutting new expose by the New York Times, a  group of internet sleuths, among them, a pilot assisted NYT in unravelling a great Tesla mystery behind lots of delayed (some indefinite) orders and unexplained logistics issues across North America. This breaking news item comes at an inopportune moment when founder and technopreneur Elon Musk was recently ordered by the US Securities and Exchange Commission (SEC) to step down as Chairman and pay a US$20 million dollar fine stemming from Musk’s August tweets claiming that he secured financing to take the famed electric carmaker private if he wanted to.

Tesla share price over the weekend during the SEC brouhaha

According to Forbes, Musk boasts an estimated net worth of $21.2 billion, thus, SEC’s US$20 million dollar fine represents less than 0.1% of Musk’s total net worth. The initial fight between multi-billionaire Musk and the SEC sent Tesla shares tumbling but shares sharply rebounded (up 16%) after Musk and SEC reached an agreement: in addition to the fine, the Tesla founder would relinquish his chairman position but retain his Chief Executive title, his place on the board and also his standing as the electric carmaker’s majority shareholder.

The legal drama arose during Tesla’s pivotal third quarter where Musk stated that he expected Tesla to achieve positive cash flow and profitability in the quarter but on 1 October 2018, New York Times released a damning article which depicted a reality that wasn’t as rosy as Musk portrayed. 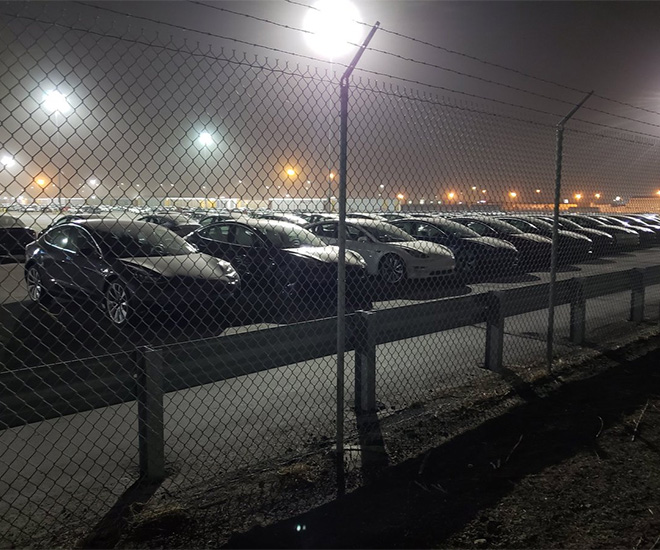 NYT reports that a team called the Shorty Air Force has been posting images and tweets of photographic evidence showing that “Tesla has been parking anywhere from a couple of dozen to a few hundred cars at a lot in Burbank, Calif. In Lathrop, 70 miles east of San Francisco, Tesla has as many as 400 cars at an industrial site. A similar number turned up outside an industrial building nearby. At times cars have been seen entering and leaving the building, suggesting it may be a collection point or repair center. Hundreds more have been found in Antioch, northeast of San Francisco. On Thursday, a batch of about 100 Model 3s turned up in Bellevue, Wash. Smaller collections have surfaced in Chicago, Dallas, Las Vegas and Salt Lake City.”

Critics and heads of wealth funds taking short stock positions have opined that Musk’s claims of car delivery logistics issues are false and that demand is actually weaker than anticipated and even if Musk’s claims were to believed, the sheer number of Tesla models requiring service point to larger production issues. Read the rest at NYT