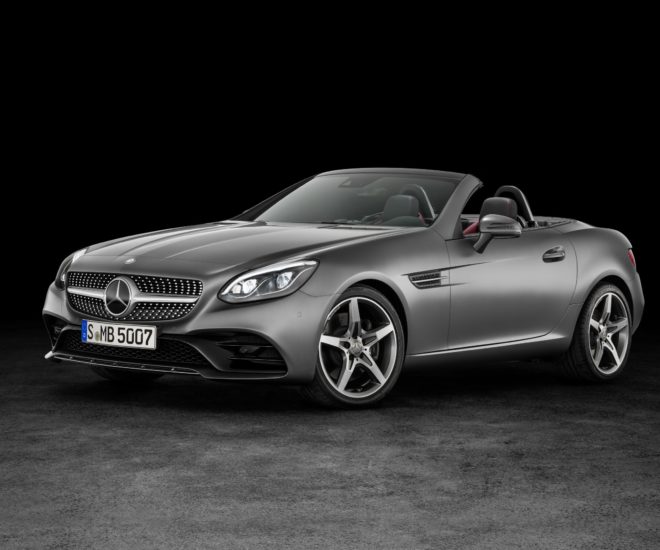 Ahead of the Detroit auto show and in the wake of the Land Rover Defender auction, there is a lot of motoring news to get through and we begin with Mercedes-Benz decision to go from SLK to SLC in 2016. Announced last week, even as we were pushing out news on the V12 S-Class, this one is a bit of a sleeper because there is more here than a new mix in the alphabet stew. The compact, drop top sportscar is getting a new look, new engines and new technology for a new era.

Set to make its first public appearance at the North American International Auto Show in Detroit in January, the new SLC (which is replacing the SLK) won’t be going on sale until April, but for those that like ferocious power, wind-in-the-hair motoring but no compromises when it comes to inner-city maneuverability or everyday cosseting, it will be worth the wait.

“In 1996, Mercedes-Benz redefined the roadster with its innovative vario-roof and combined open-air driving pleasure with uncompromised comfort in poor weather,” said Ola Källenius, the company’s head of sales and marketing. “The renamed compact roadster remains an ideal combination of passion and rational common sense, appealing to both the heart and the mind.” Nowhere is this truer than in the new six-model line up which offers a diesel and, for the first time, a 1.6-liter entry-level option. Even the range topping AMG 43 will serve up its power with responsibility.

With a twin-turbo 3-liter V6, it’s capable of going from 0-100kph in 4.7 seconds and of outputting 362bhp via a nine-speed gearbox complete with a range of pre-set driving modes for comfort, economy or break-neck speed. The outgoing SLK AMG had a huge V8 engine and lashings more horsepower, but it was only 0.1 seconds faster off the mark and is incapable of returning the new car’s 7.8 l/100 km.

Regardless of powerplant, all new SLCs come with the same revised nose, sloping hood and diamond grille that brings the car in line with Mercedes’ other sportier offerings — the AMG-GT and the SL. The folding metal Vario Roof has also been given a serious upgrade. It will now automatically raise or lower at speeds of up to 40kph and now also knows if there is too much luggage in the trunk to retract into the available space. For those that are worried about catching the sun but still want to feel like the roof is down, the car can be specified with Magic Sky Control. This system allows the panoramic glass roof to stay in place but to tint or untint at the touch of a button to let the light in or keep it out.

Mercedes will announce pricing for the new car in Detroit on January 11.