The Jaguar Project 7 is a classic take on a modern, and very quick, British sports car. Based on the hot-selling new F-Type roadster, this concept ditches the passenger seat and convertible top for less weight and higher performance. 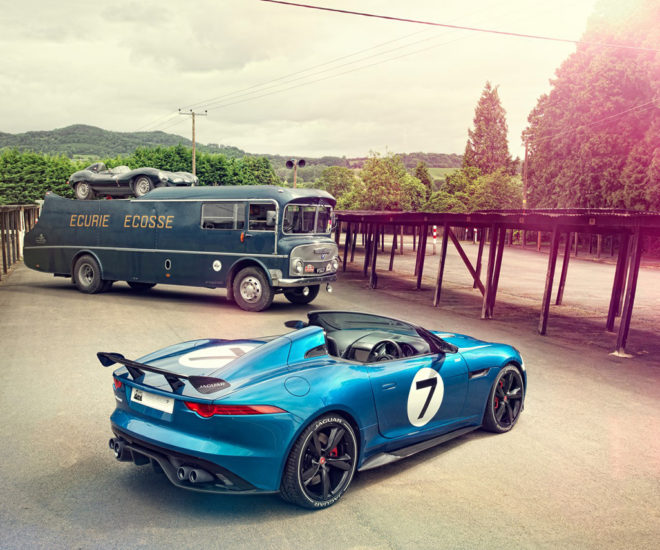 Named in recognition of the company’s 7 Le Mans wins, the Jaguar Project 7 concept race car will be making its global debut at this weekend’s Goodwood Festival of Speed which runs July 11-14 in the UK. Following a brief that, according to Jaguar’s head of design Ian Callum, simply stated: “to be driven fast and enjoyed,” the Jaguar Project 7 is based on the company’s latest sportscar, the F-Type but keen observers will notice that the finished product has also taken more than its fair share of design cues from the legendary Jaguar D-Type racer. Nowhere is this more evident than in the fairing that rises from the car’s rear, stopping just behind the driver’s head — one of the D-Type’s defining features. However, under the entirely aluminum body everything is bang up to date. There’s a 5-litre supercharged, 550PS, V8 engine with an electronically limited top speed of 186mph (300kph). It pushes its power to the rear wheels via an eight-speed gearbox and an electronic active differential to ensure the correct wheel has the correct amount of grip at any given moment. Adding to the sporty feel is the lowered windshield, the effect of which is magnified by the fact that the single seat in the specially designed cockpit is 30mm lower to the ground than in the F-Type, giving the driver a greater sense of the car’s behavior and better feedback and, crucially, improving the car’s center of gravity for grip, cornering and all-round handling. Also ensuring that the car doesn’t inadvertently leave the track — 550PS is a lot of power in such a lightweight package — the car features a bespoke carbon fibre aerodynamics package for better downforce and airflow. But best of all, the Project 7 is not a static concept: it will spend its time at this weekend’s Goodwood Festival of Speed being put through its paces on the Hillclimb.