Lined up to match the release of their new M2 sportscar, BMW unveils a limited edition Cruise bike as a two-wheel tribute. 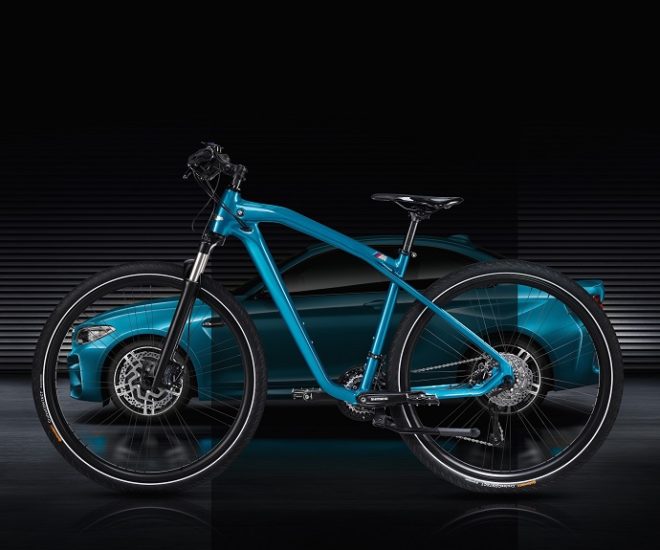 The phenomenal M2 sportscar by BMW has ramped up a huge amount of anticipation, priming car lovers for its imminent arrival. In conjunction with that, a bicycle sporting the same sleek metallic finish of the car will be released as a limited edition at 1,500 examples globally, each costing €1,400. The Cruise M is the miniature version, a toy if you will, to turn to if you would rather not shell out for a big boy’s performance toy like the M2 itself ($53,000 premium price tag – before options, before taxes). Also, the M2 deserves drivers who will both push it and enjoy doing so, which, if you are a 7 series person is probably not you…

Mind you, the Cruise M is a beautiful machine in its own right. While BMW is known mostly for automobiles, they’ve also been in the bicycle business for 60 years already. This expertise shows in the construction of the Cruise M, which is made out of carbon fiber and aluminum for strength without adding weight. The bike also sits on lightweight 28-inch wheels and has a 30 gear system. The frame has been shaped so that the crossbar follows the contour of a motorbike’s fuel tank and each section of the aluminum frame has been welded to make the finished result look like it was moulded out of a single sheet of metal. Every single one built will arrive with a plaque detailing its limited edition status and which of the 1500 examples it is.

Alongside this limited edition, BMW also announced their full Spring 2016 bicycle collection. They’ve added a small frame (160cm) option across their existing range of Cruise and Cruise e-bike models, as well as giving the Cruise e-bike a more potent electric assistance motor that now has a pedal-assisted top speed of 25km/h.

This year marks the company’s 100th anniversary in building cars. This is a nice addition to a brand that is still at the top of its game. Also, bikes are good for you and good for the environment.