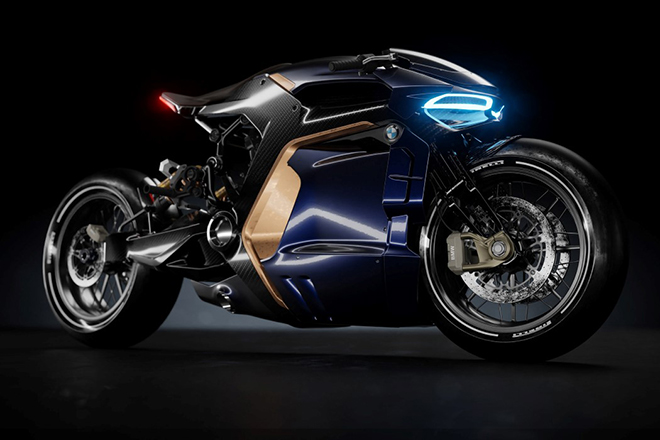 Regarded a mere design exercise, this BMW Café Racer by Concept Designer Sabino Leerentveld, is far from ordinary. Eliminating  the Bavarian manufacturer’s characteristic boxer engine, the Netherlands-based designer with a knack for producing an array of conceptual cars, this two-wheeler represents a cross between traditional café racers and futuristic bikes. 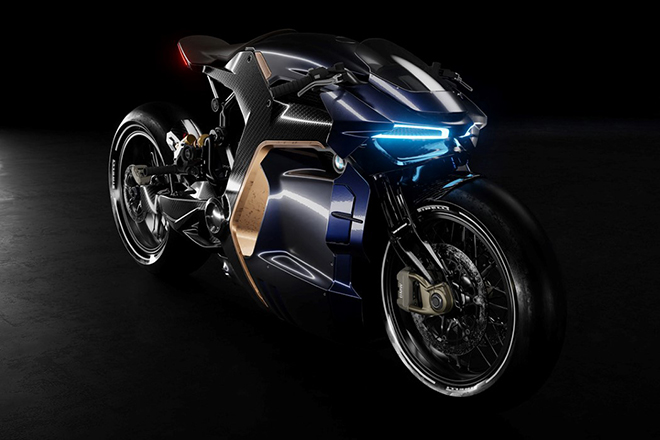 With no formal name, this concept features an undeniably futuristic sports vibe – thanks to a linear top and single wave-shape line going from tail light to headlight; breaking just once for the dashboard visor. Through blending metal and carbon-fiber, this Café Racer is characterized by a BMW logo on its side, and in keeping with BMW’s tradition, opts for a split headlight instead of the iconic split kidney-grille, whilst edge-lit taillights are positioned on the end of the seat – cantilevering off the bike’s main body to create an absolutely enchanting side-profile. Coated in a black and gold colour scheme that appears to be inspired by one of the greatest racing liveries of all time – the black and gold livery of the John Player Special-backed 1985 Lotus F1 car, this BMW Café Racer by Concept Designer Sabino Leerentveld has been showcased a variety of unique designs, including one in red and gold, reminiscent of Iron Man. Complete with old-school spoke-wheels and racing tires by Pirelli, this concept follows a minimalistic approach, drawing inspiration from four-wheel hypercars and wild racing machines.