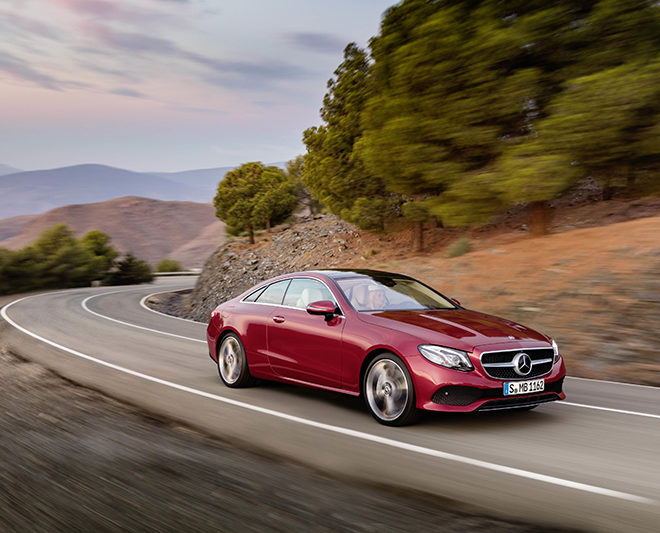 The new E-Class sedan is many things. It’s the most technologically advanced four-door car on sale today. It’s also one of the most connected. However, one thing it isn’t is exciting. It’s a car that appeals to logic rather than emotions.

The coupé’s combination of a high waistline and sharply sloping roof definitely gives the car a much more striking appearance than its sedan counterpart while details around the grille and at the rear offer subtle nods to some of the company’s sportier models such as the SL.

And it’s a similar story inside. The coupé has a new cockpit layout with a two digital screens fused together that run across most of the dashboard replacing the traditional driver’s instrument binnacle and the centrally positioned infotainment system.

The steering wheel is also touch sensitive — it responds to taps and finger swipes. This means that you can take a call or turn up the volume without taking your hands off the wheel. All of which lends the cabin a very futuristic feel — and it’s apt as the car is bulging with next-generation technology.

For instance it has remote parking and can be summoned via a smartphone app. It can also automatically follow a car ahead on any type of road at speeds of up to 130mph. It offers the driver live, real-time traffic news, can autonomously brake to avoid potential collisions and, if you’ve misplaced the key, as long as your smartphone supports NFC, you can use the handset to lock or unlock the car.

As for performance, that will initially come from a range of four- and six-cylinder engines, the most exciting of which, a 3-liter V6 will offer 333hP and 100km/h in 5.3 seconds. However, hotter AMG versions are in the pipeline for late 2017.

The E-Class coupé will make its real-world debut at the Detroit Auto Show on January 8.