The unique Ferrari is predicted to sell for between $14 million and $16 million. 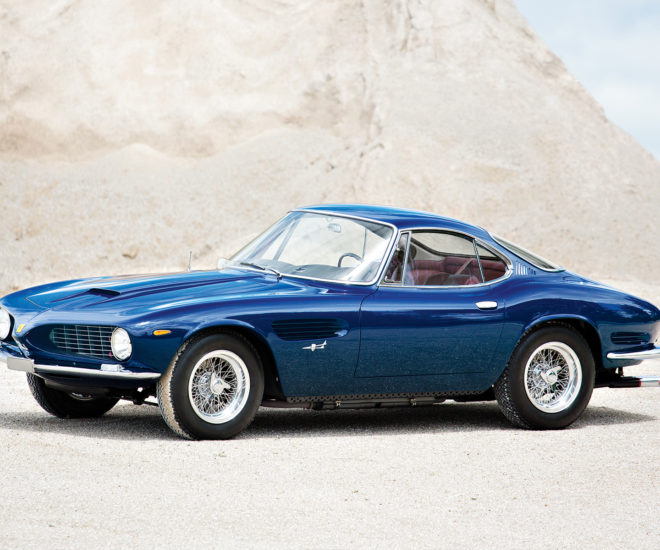 Too many classic cars that fall under the auctioneer’s hammer are described as historic and as being masterpieces in the accompanying catalogue. But in the case of this unique Ferrari there could no truer terms.

The car, a 1962 250 GT SWB Berlinetta Speciale, sports a shark-nose body built by legendary designer, Giorgetto Giugiaro under the guidance of his boss, Giuseppe “Nuccio” Bertone.

Nuccio Bertone never saw himself as a designer, but as the head of Carrozzeria Bertone — the design studio he managed until his death in 1997, he proved himself perhaps the world’s greatest design talent scout.

He unearthed and polished to perfection the abilities of Giorgetto Giugiaro and Marcello Gandini and under his wing, they developed some of the most beautiful, challenging and influential cars of the 20th century including the Lamborghini Miura and its follow-up the Countach, the Alfa Romeo Giulietta Sprint and the Lancia Stratos.

But despite the company’s success, Bertone was frustrated that the company was yet to design a Ferrari. In 1962 he took matters into his own hands, buying a 250GT SWB chassis from Ferrari and, with Giugiaro’s help, created the car that will go under the hammer at Gooding & Co’s Pebble Beach auction on August 15 and 16.

As well as the shark nose, the car’s exterior seamlessly integrated a number of racing-inspired design cues while inside, the cabin’s comfort and luxury were taken to another level. The seats were trimmed in leather, the steering wheel redesigned and the windows electrically operated.

Bertone kept the car as his personal run-around before selling it on a year later. And while it’s changed hands several times since, it has never before come up for auction.

What makes the auctioneers certain that this car is on the verge of fetching $16 million is the Giugiaro as much as the Bertone factor.

This was only the third car Giugiaro had ever had a hand in styling but he would go on to build up one of the most impressive portfolios of anyone in the automotive design world, full of everything from Alfas and Lamborghinis to the Lotus Esprit and the Volkswagen Golf, but only this one Ferrari.

As for Bertone, when the company finally got the chance to design for Ferrari, the Dino 208 GT4 was poorly received upon its debut in 1973 and Ferrari returned to Pininfarina for its replacement in 1980. A situation that Nuccio Bertone considered one of his greatest regrets in life.