A dozen biplanes from the 1920s and 1930s will fly 8,000 miles from Crete to Cape Town next month in a vintage aviation rally. 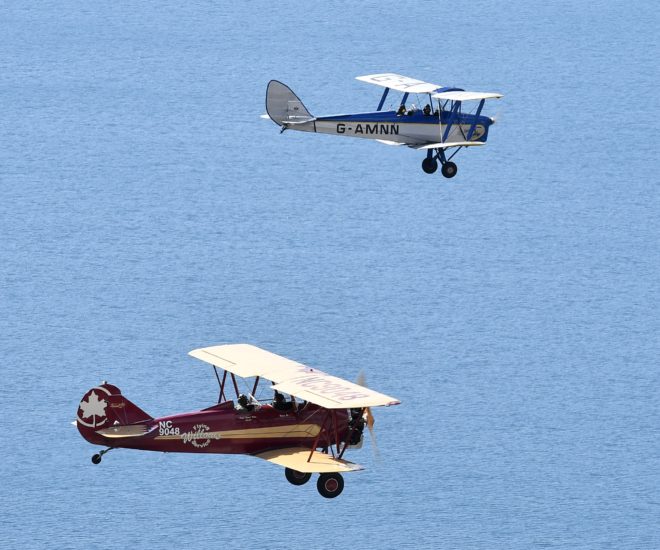 A dozen biplanes from the 1920s and 1930s will fly 8,000 miles from Crete to Cape Town next month in a vintage aviation rally that harks back to the early days of air travel.

The pilots will fly along the Nile from Cairo to Khartoum, past the highlands of Ethiopia, down through East Africa past Mount Kilimanjaro, over Victoria Falls, and will end in South Africa.

“The aircraft are going to be flying hot, high, and they’re going to be struggling… So are the pilots,” said “Vintage Air Rally” (VAR) organizer Sam Rutherford under blue skies at Brighton City Airport.

“There’s no autopilot, there are no automatic systems, it’s all hand flying, with very little protection from the elements – sun, wind, dust, the oil being sprayed out of the engine up front whilst it’s still turning. It’s all full on.”

The group makes up the largest number of vintage biplanes to attempt this journey across Africa.

Teams from a dozen countries including Britain, Canada, France, Germany, South Africa and the United States are to take off from the Greek island of Crete on November 12, touching down in Cape Town on December 17 after 35 days and a journey of some 8,000 miles (13,000 kilometers).

It is the first aviation rally to be granted permission to land at Egypt’s Giza pyramids in 50 years, and will put on Sudan’s first air show, Rutherford said.

The worst thing that could happen – and most likely serious problem – is engine failure, he added.

“They’re all single engine aircraft, there isn’t a spare one on another wing. But on the positive side, the aircraft fly relatively slowly, and indeed they force land very, very slowly.

“So it only needs a small patch of land, a little bit of road, even a football pitch, to safely get the aircraft on the ground.”

With his green bomber jacket, windswept hair, and sun-crinkled eyes, Pedro Langdon looks as if he has stepped out of the 1920s himself.

The Canadian-American will be flying his 1928 Travel Air 4000 during the rally, a commercially built plane originally used to carry passengers in the front seat, with a 220 horse power, seven cylinder engine.

“For me it’s a whole other world up there, a way to become more present in the moment, it’s an exhilarating experience,” he said after a test flight above the white cliffs of southern England.

As well as being an adventure, the rally is working with the charity BirdLife International to raise awareness about the plight of the African vulture, with seven out of 11 species currently on the edge of extinction.

Each pilot is matching themselves to an endangered vulture, and each landing en route will highlight the issue.