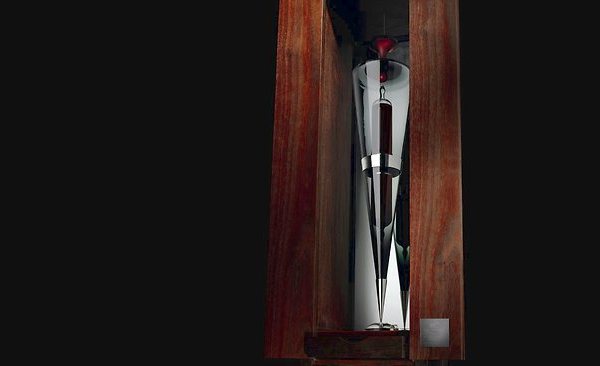 The wine is held in a unique hand-blown glass “ampoule” designed to provide the ideal environment for the liquor, and this is suspended inside a bespoke glass container which sits inside a wooden cabinet.

“It is our understanding this is one of the most expensive Australian wines released in this unique format,” said Penfolds spokeswoman Ildi Ireland.

But when the buyer decides to crack open the high-priced vintage, he or she will have to call out a senior member of Penfolds’ wine-making team, the only person with the correct training to uncork the prized bottle.

The wine expert will travel to wherever the customer is to remove the ampoule from its glass casing and open the bottle using a specially-designed device.

“The wine contained within the ampoule, first released in the 1950s, holds a particular significance among generations of Australian and international wine collectors,” Penfolds said in a statement.

The wine, a 2004 Kalimna Block 42 Cabernet Sauvignon, is a rare single-vineyard wine which is only released in stellar vintages.

The Block 42 vineyard, planted in the mid-1880s, is in South Australia’s Barossa Valley and Penfolds said it is thought to have some of the oldest continuously-producing Cabernet Sauvignon vines in the world.

“There is something really magical about the 2004 Block 42 Kalimna Cabernet,” said Penfolds chief winemaker Peter Gago.

“It has an ethereal dimension and a saturated blackness on the palate, it’s extraordinarily perfumed with layer upon layer of flavour.”

Four artisans were commissioned to produce the ampoule and casings which feature fixtures made from precious metals that help anchor the glass sculpture to the jarrah wood box.

Penfolds, which has been producing wines since 1844, is known for its Grange wines — Australia’s most famous.

One of the ampoules will remain at Penfolds’ Magill Estate Winery in South Australia, and one will be kept by luxury retailer DFS and feature at the Master of Spirits event in Singapore early in the New Year, Penfolds said.