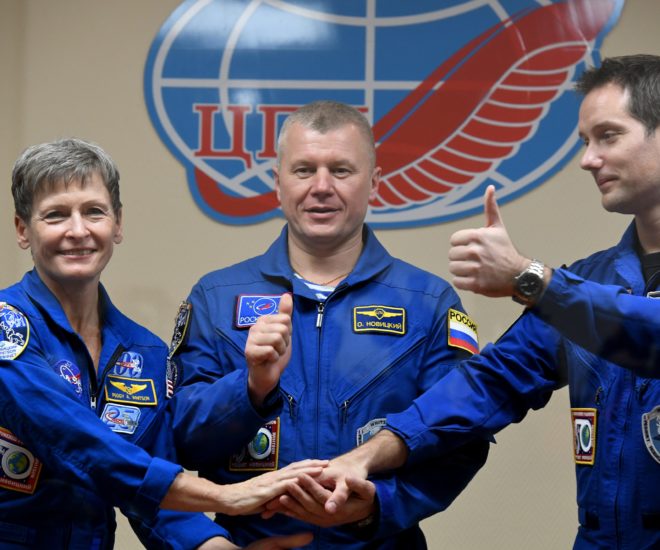 This dining adventure is out of this world – literally. Rookie French astronaut Thomas Pesquet, 38, will be lifting off from the Baikonur cosmodrome to the International Space Station (ISS). He will be accompanied by fellow US and Russian astronauts, Peggy Whitson and Oleg Novitsky respectively.

To celebrate Pesquet’s first journey into space, he will be bringing along some haute cuisine with him, courtesy of acclaimed French chefs Alain Ducasse and Thierry Marx. The Michelin-starred dishes to be brought to the ISS include truffled foie gras and duck breast confit. Just the thought of how this will work in a zero-G environment is fascinating.

“We will have food prepared by a Michelin-starred chef at the station. We have food for the big feasts: for Christmas, New Year’s and birthdays. We’ll have two birthdays, mine and Peggy’s,” said Pesquet, who trained for seven years for this inaugural flight of his.

Launches to the International Space Station are currently only operated by Russia, with its Soyuz rocket located at the Baikonur cosmodrome spaceport at Kazakhstan.

The upcoming trip will be the third for 56-year-old Whitson, who holds the record for time in space for a female. She will assume command of the ISS after March 2017. Novitsky, 45, is going to the station for the second time.

“I think the thing that I find the most challenging about space flights is the lack of variety of the food,” said the US astronaut, who will command the ISS for the second time after becoming its first female commander back in 2007.

But above all she stressed the international cooperation embodied by the ISS. “I think quite the most important thing about it (ISS), it’s the demonstration of what people can do together,” she said.

Novitsky agreed. “The ISS is both a home and a place of work. It’s also a place for friendship, for showing to the world that we can work together and have good relationships,” he said.

The launch of the international trio had been postponed by two days and follows closely in the footsteps of a previous launch in October of Russians Andrei Borisenko and Sergei Ryzhikov and American Shane Kimbrough.

That blast-off was pushed back by nearly a month due to technical issues.

Pesquet, who is the first French national to be sent to the ISS by the European Space Agency since 2008, said he still “can’t believe” he’s going to be en route to the space station soon.

“I need to be seated in the cockpit and feel the vibrations of the launch,” he said.

Technical mishaps have complicated plans to extend the periods during which the ISS is fully staffed with six astronauts.

Space travel has been one of the few areas of international cooperation between Russia and the West that has not been wrecked by the Ukraine crisis.