The pervasiveness of brand engagement through tactical tools like thematic events and online advertising has democratised luxury, so how does one cater to the brand’s ultra high net worth customers? 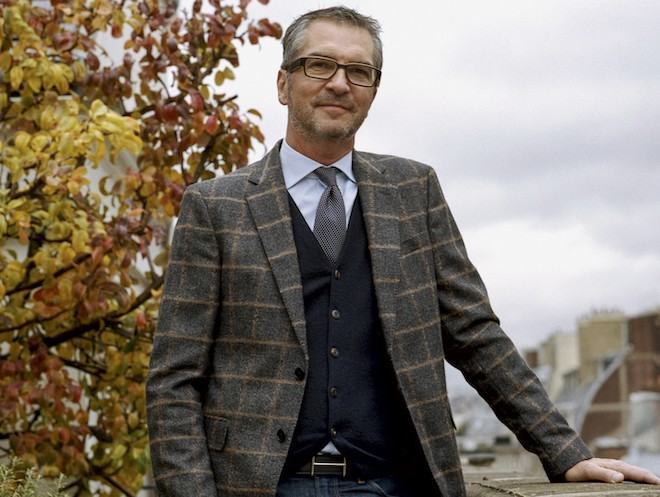 A one-on-one discussion with La Montre Hermès creative director himself, Philippe Delhotal on bespoking your next Hermès watch because everything else in the current collection is not “special enough”; This is the level of access a top client of Hermès can request as LUXUO/WOW discovered just before last evening’s dinner celebrating Time A Hermès Object. Mr. Delhotal was slated to take us through the exhibition at Singapore’s Ngee Ann City Atrium prior the evening’s celebratory repast but when one of your top customers come knocking, how can one refuse?

Brands, big and small, are cottoning on to the idea that catering to the ultra-rich is no mean feat. In fact, with more luxury brands communicating their brand values to an ever widening audience through a myriad of communication tools ranging from thematic events to run-of-the-mill Facebook ads, the net effect is that luxury has become more inclusive – so where does that leave your creme de la creme, highest of the high net worth individuals? Feeling a little less important. 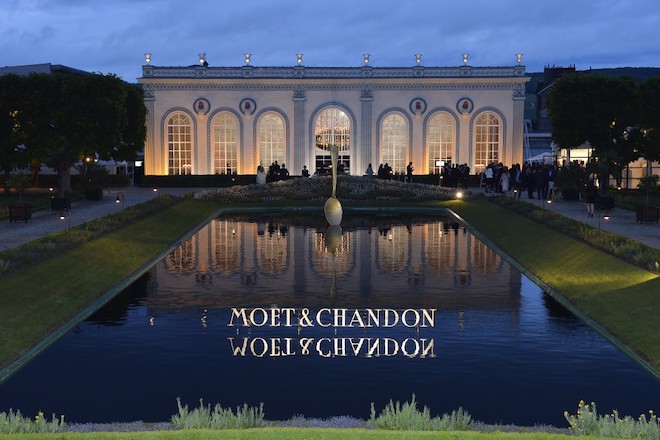 Make no mistake, VIP marketing has always been a thing but catering to the ultra wealthy individuals is a whole other stratosphere – how does one curate an ultimate experience for customers whom money is no object? On 22nd of May 2019, LVMH unveiled the Moët & Chandon’s Château de Saran after a five-year renovation.

“We are thrilled to welcome our honored guests to the beautifully-restored Château de Saran to celebrate the 150th anniversary of Moët Impérial in grand style, and to mark a pivotal moment in our House’s history,” – Stéphane Baschiera, President and CEO of Moët & Chandon. 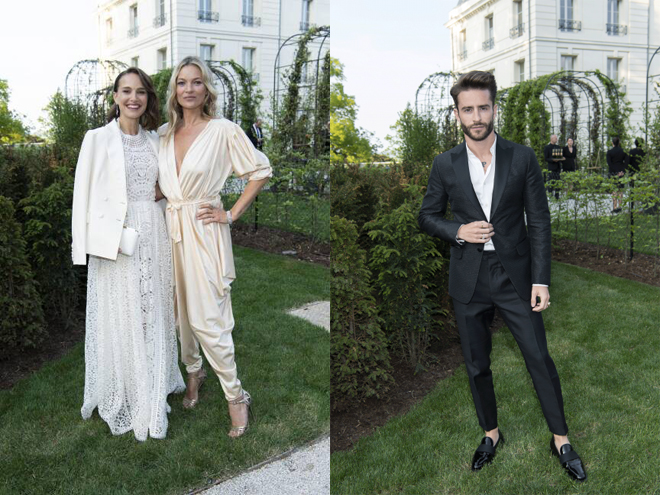 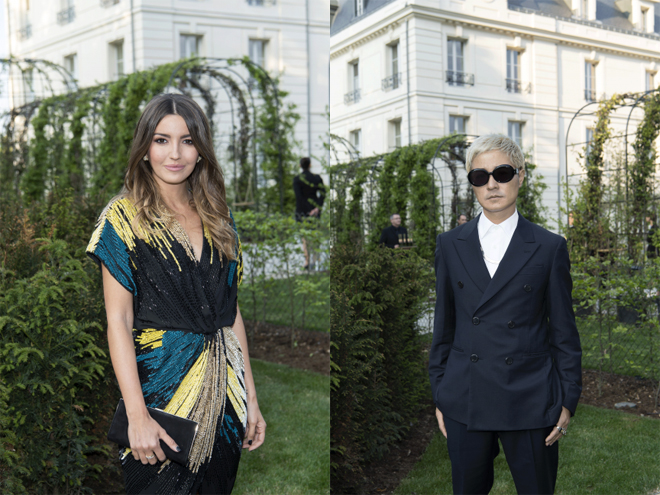 Hollywood stars including Natalie Portman, Uma Thurman and Douglas Booth were joined by international socialites such as Derek Blasberg and Kate Moss to toast the 150th anniversary of Moët Imperial at the renovated Château de Saran, which has been a property of the Maison since 1801. 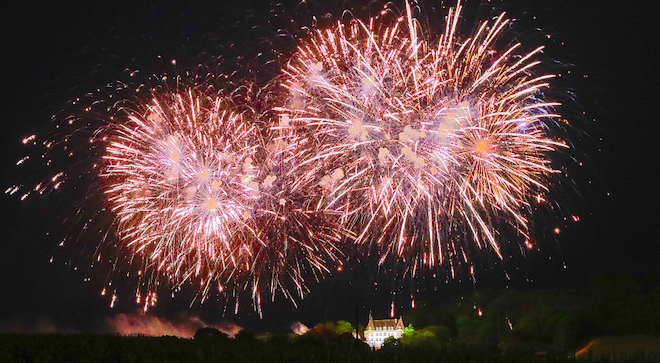 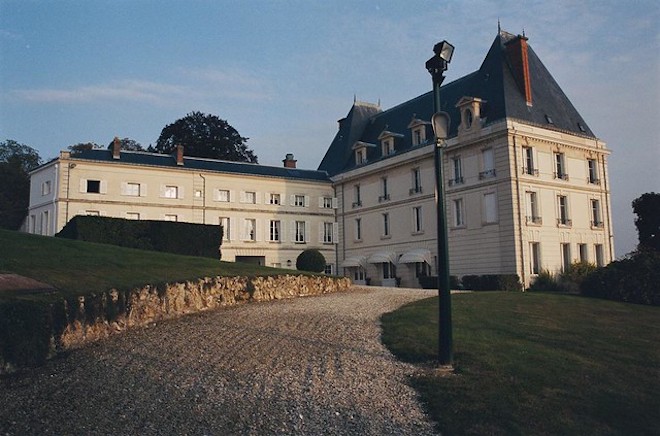 Moët & Chandon’s Château de Saran was once a hunting lodge built for Jean-Rémy Moët, a grandson of the founder and it became his family residence. Invite only, it has welcomed guests of the champagne house since the 1960s and the maison is tight lipped on even how to meet the criteria for an invite or the minimum spend on champagne before one is even considered potentially for an invitation.

It’s a sprawling yet intimate Château comprising three grand salons, 11 large bedroom suites and of course a labyrinthine wine cellar worthy of one of the world’s most prolific makers of champagne. Seeing close to 2000 “honoured guests” each year, an invite to Château de Saran is shrouded in secrecy mostly because it would be mundane and politically fraught if the criteria were too clear – a potential client might requiring some winning over or a long term customer rewarded, or a celebrity with great influence could be feted – it’s all in the game of high net worth luxury marketing. 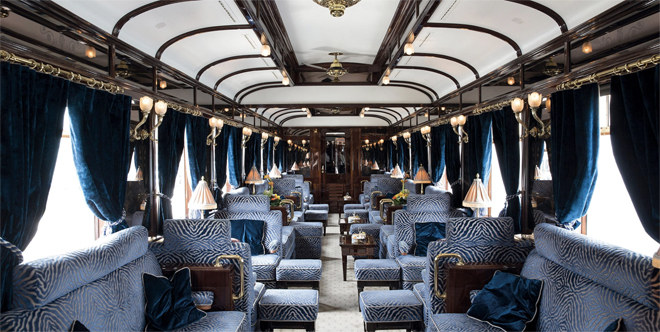 Arriving in style from Paris on board a special Orient Express steam train, over 100 true VIP guests were amply catered and fed by three-Michelin-starred chef and long term Moët & Chandon brand ambassador Yannick Alléno and complemented by the artistry of Dominique Crenn, chef of the Michelin three-star restaurant Atelier Crenn in San Francisco, as they wined and dined in a striking mirrored décor designed to reflect the spectacular beauty of the Maison’s Chouilly vineyards.

LVMH owns Belmond Group, an almost 50 year old hospitality veteran with a global collection of exceptional hotel and luxury travel adventures, operates in 24 countries with its unique and distinctive portfolio of 46 hotel, rail (including the Orient Express) and river cruise experiences. Hence, it’s within the realm of possibility to curate a highly bespoke brand experience with the most lavish of executions. 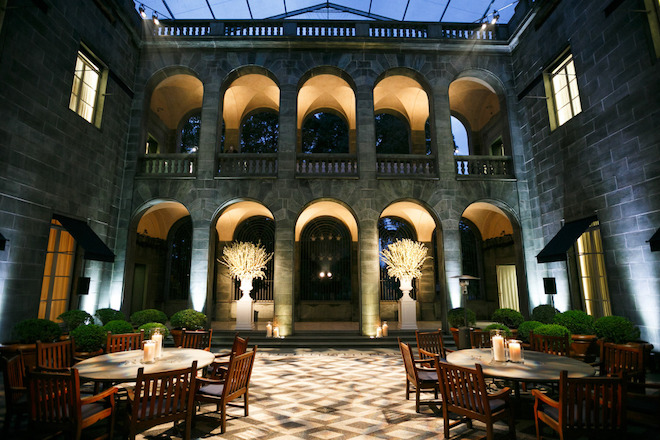 “How do you envelop people inside of a world where they feel taken care of? You want the beautiful clothes, you want delicious food, you want to be social with the right people. We’re creating a dream that you can live inside of.” – David Lauren to GQ’s Devin Friedman

Creating a unified dream where a brand’s guests can not just partake of the brand’s values and products but commune with other like minded individuals is a goal best expressed by David Lauren, son and heir-apparent to Ralph Lauren. For fashion brands, it takes a differentiated but slightly similar approach to LVMH but the objective remains the same – it’s an experience that money cannot buy and a shared experience with individuals whose income levels and values aren’t dissimilar to yours. 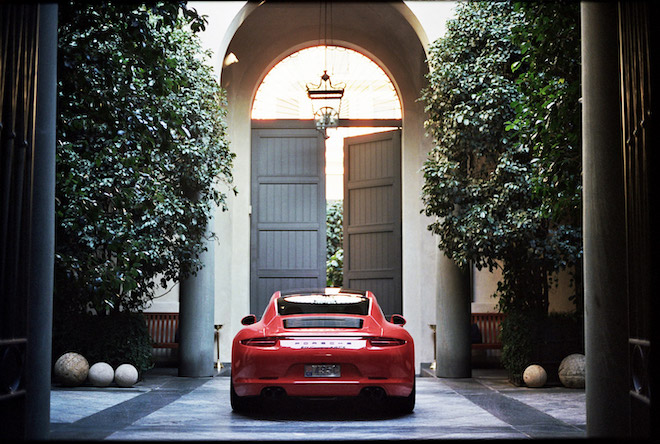 What hides behind nondescript doors of the Palazzo Ralph Lauren

Located in Milan, Palazzo Ralph Lauren is the city’s best kept secret (most locals aren’t even aware of it). There’s no signage on the door from Via S Barnaba, you’d walk past the 1941 Rationalist-era, architettura razionale building and assumed it was just another one of those blue blood buildings owned by early Italian aristocracy from the early days of the city’s history.

Casa Campanini realise that the heart and soul of Ralph Lauren resides within the sprawling 12,000 square feet compound. Home to trunk shows artisan showcases and private events, like Moët’s Château, Palazzo Ralph Lauren is designed to reinforce the Polo lifestyle. You first have to be invited, either by the atelier or by another member and then its accessible by appointment only. 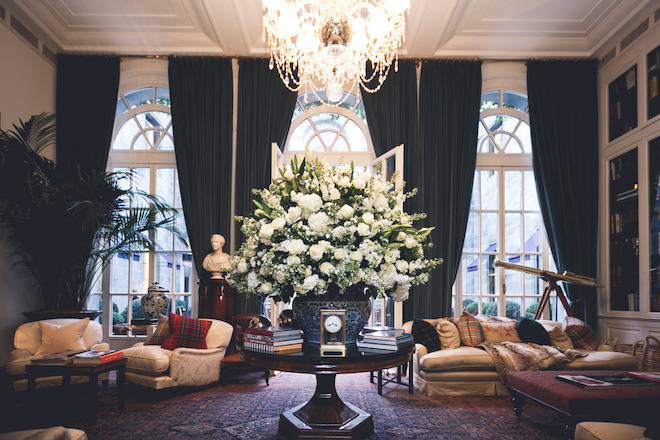 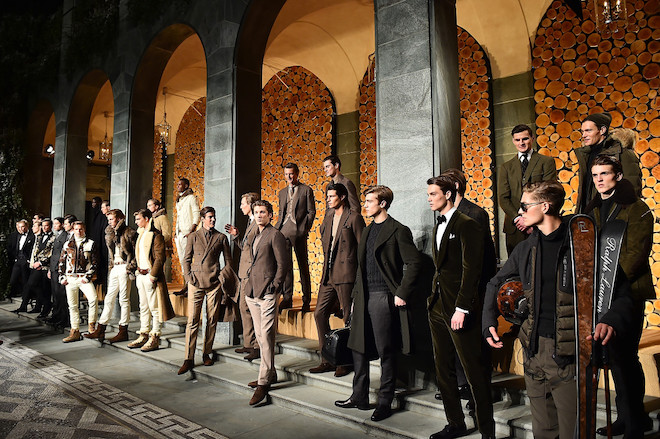 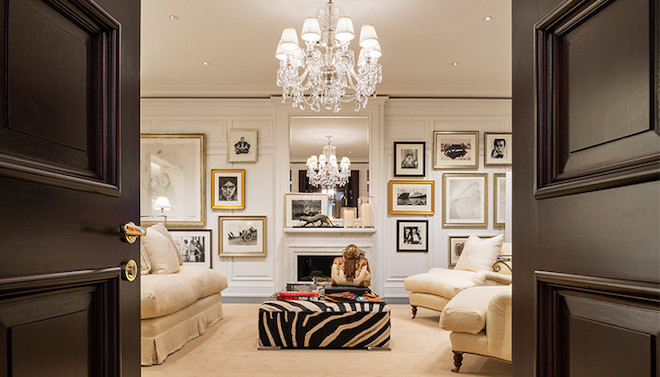 While privacy is an ever present buzzword, every single one of the Palazzo’s offerings are catered to providing something even more intangible – deeper, more meaningful relationships with the brand’s most loyal customers – pret-a-porter is offered but the keyword is bespoke – from timepieces like the Art deco Slim Classique to classic men’s tailoring and even women’s couture, enjoyed within the privacy of the Ralph Lauren Palazzo. But it’s not just wearables, it’s the Ralph Lauren Home collection as well, used during special cocktail events and dinners but also available for sale should you wish to replicate the Ralph Lauren lifestyle in your own home.

Opened in 2015, Palazzo Ralph Lauren was a glimpse at the life that Mr. Lauren himself envisioned, a boutique within a mansion with a sprawling roof top al fresco area and an in-house chef for intimate soirees, you can buy the trappings of a certain lifestyle but the style of living is something you can’t buy. 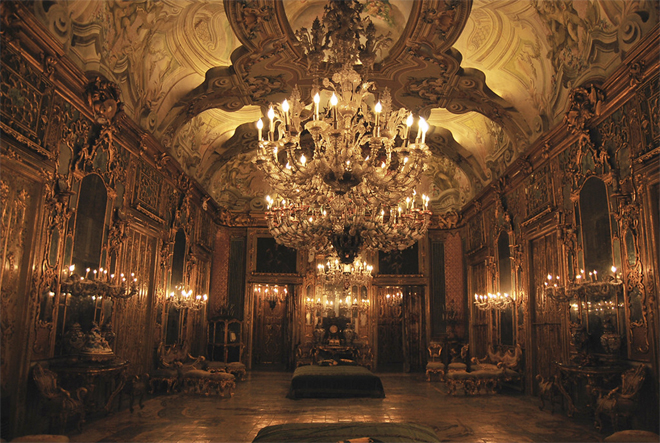 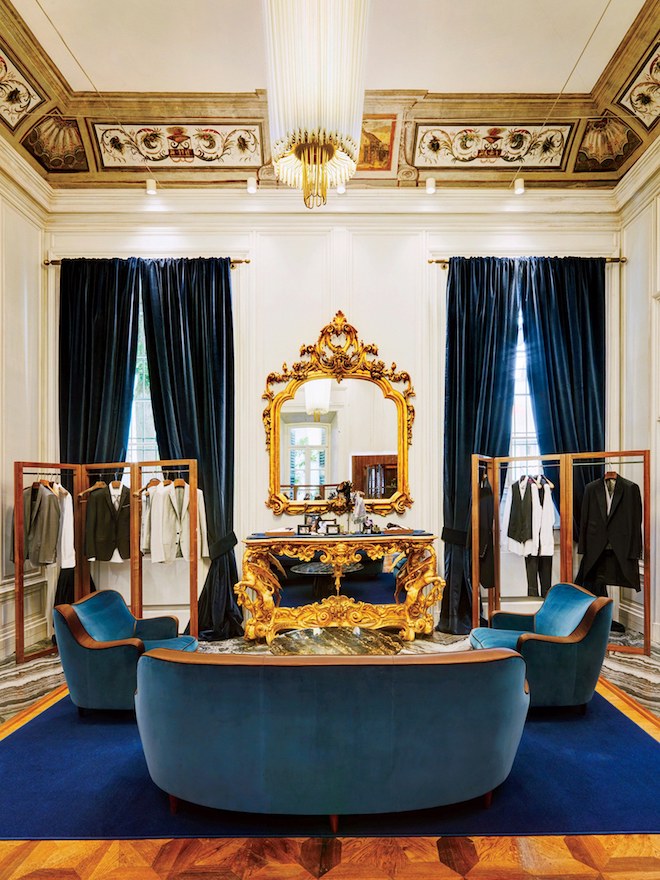 A stone’s throwaway, VIP guests can get a trim and a hot towel shave by true blue Italian barbers at Dolce & Gabbana’s own barbershop at Palazzo Torres and after, get properly fitting for a bespoke suit at the exclusive Alta Sartoria atelier and then celebrate with a Campari at the brand’s private Martini Bar. 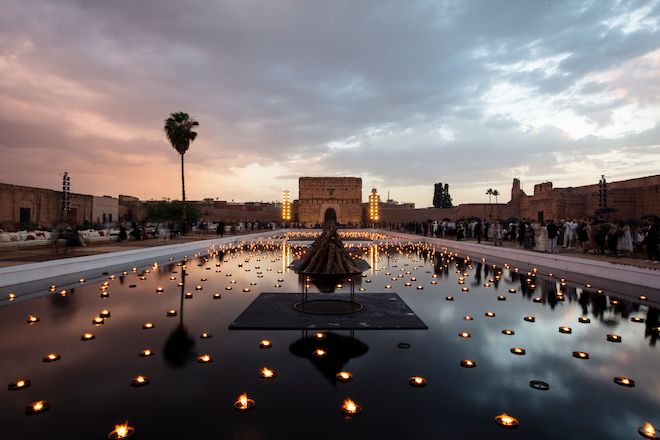 Earlier this month, Dior put on an epic show, unveiling their 2020 cruise collection In Marrakesh, an enigmatic intersection between Europe and Africa amidst the resplendent Moroccan El Badi Palace. Hundreds of guests mingled with celebs like Jessica Alba, Lupita N’yong and Shailene Woodley and then shared a special dinner complete with and a traditional African musical performance at the Palais Bahia.

What do you give someone who can buy anything their heart desires? Give them something they can’t buy.