The world’s tallest Atlas, the 6 ft-tall Earth Platinum from Australian publisher Millennium House has gone on sale for a mere $100,000 per copy. 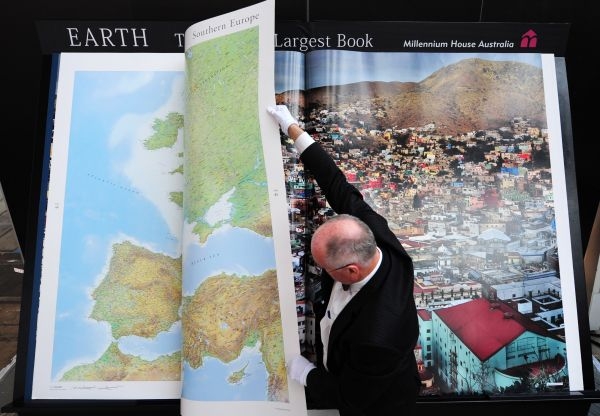 The world’s tallest Atlas, the 6 ft-tall Earth Platinum from Australian publisher Millennium House has gone on sale for a mere $100,000 per copy.

The publisher said that the last book even close in size to his 128-page volume was the Klencke Atlas, produced in 1660 as a gift for Charles II of England.

“But that was about one foot smaller than this,” Millennium House founder Gordon Cheers, proudly told AFP. “This is the first time a book this size has ever been seen.”

“It’s all about creating a legacy,” the Sydney-based publisher said. “Today, everything is digital and it’s gone in a second. This will still be around in 500 years.”

The book took around a month to produce and Cheers is limiting the print run of his monster Atlas to 31. He has already sold two volumes to museums in the United Arab Emirates and is confident he will sell the whole lot.

Cheers worked for British publishing giants Penguin and then Random House, but neither firm was interested in his project, so he left to found his own company.

The book contains maps of whole continents, as well as sharp images of famous sites collaged together from 1,000 individual pictures.

As far as he knows, no one else is producing books on this scale. “I think we’re the only ones crazy enough,” quipped Cheers.