The 10 most beautifully designed new restaurants

Check out the slideshow of the 10 Most Beautifully Designed New Restaurants in the world from Architectural Digest! 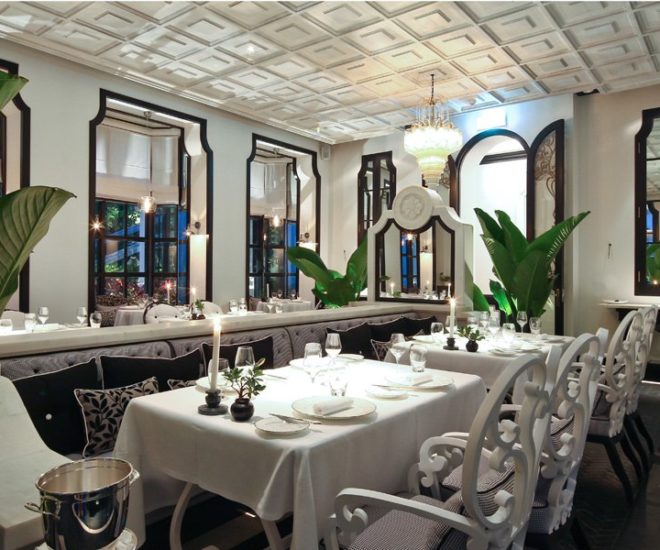 Restaurants spanning Doha, Paris, Berlin and Vietnam have made Architectural Digest’s top 10 list of the most beautifully designed new eateries in the world. Chosen for “going beyond the ordinary,” the magazine shines the spotlight on recently opened dining destinations such as The Troll Wall in Romsdal, Norway, which does an architecturally admirable job of competing against its stunning backdrop, a location set against the highest vertical rock face in Europe. At the foot of the towering slate grey Norwegian mountain, a pyramid-like structure of dramatically angled glass walls rises out of the ground – angled so as not to impede any sight lines to the sky. Other restaurants that got an AD nod include the Astor Grill at St.Regis Doha, a steak and seafood restaurant where guests are greeted with a striking 5-meter tall, curved, silver sculptural art piece that wraps around the entrance wall. Philippe Starck-designed restaurant Ma Cocotte, located in the biggest and most famous flea market at the edge of Paris the Marché aux Puces Saint-Ouen, was also singled out for its eclectic interior, furnished with vintage and modern finds from the surrounding minefield of antiques. Other addresses which made the top 10 list include NoMad and Atera in New York; 5-Cinco, Berlin; Brasserie Zédel in London; Volkshaus Basel in Basel, Switzerland; and French Blue in St. Helena, CA.