Kate Middleton wore a stunning ivory and lace wedding dress Friday by Sarah Burton of Alexander McQueen, her face covered lightly with a hand-embroidered veil held by a tiara lent by the queen. Smiling broadly and waving to the cheering crowd, the 29-year-old also clutched a bouquet of flowers that included Sweet William. Her bridegroom […] 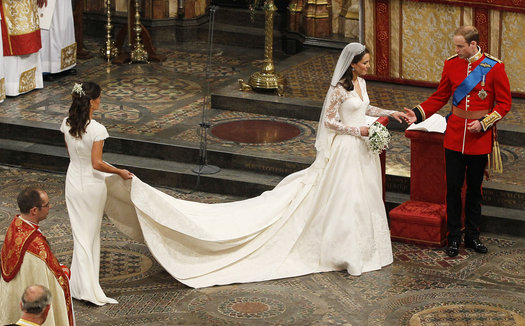 Kate Middleton wore a stunning ivory and lace wedding dress Friday by Sarah Burton of Alexander McQueen, her face covered lightly with a hand-embroidered veil held by a tiara lent by the queen.

Smiling broadly and waving to the cheering crowd, the 29-year-old also clutched a bouquet of flowers that included Sweet William. Her bridegroom showed his appreciation by mouthing to her: “You look beautiful.”

Burton, the 36-year-old creative director of the fashion house Alexander McQueen, had long been tipped for the commission, but palace officials had remained tight-lipped right up until the moment Kate stepped out of the car.

They said the bride has “worked closely” with Burton in formulating the design, which she wanted to “combine tradition and modernity”.

“It’s a bridal gown of very refined detail, much more refined than the one Diana wore” at her marriage to William’s father Prince Charles in 1981, commented German couturier Karl Lagerfeld.

He told French television: “It’s very pretty, and relatively classic, but that goes with the decor, with a little touch of the 1950s that recalls Marilyn Monroe or Queen Elizabeth II’s wedding dress.”

The dress had long lace sleeves and an ivory satin bodice, narrowed at the waist and padded at the hips.

The train and bodice were adorned by delicate lace applique flowers, in a design that incorporated the rose, thistle, daffodil and shamrock — the four floral emblems of the United Kingdom.

Workers from the Royal School of Needlework helped make the dress, washing their hands every 30 minutes to keep the lace and threads pristine, and the needles were renewed every three hours to keep them sharp.

Kate wore a veil made of layers of soft, ivory silk tulle with a trim of hand-embroidered flowers. It fell to just below her waist, held in place by a Cartier tiara lent to her by Prince William’s grandmother, Queen Elizabeth II.

Her earrings, made by Robinson Pelham, were diamond-set stylised oak leaves, in reference to the Middleton family’s new coat of arms, which includes acorns and oak leaves. They were a gift from her parents for her wedding day. On her feet, she wore hand-made shoes made of ivory duchesse satin and lace, made by the team at Alexander McQueen.

In her hands, Kate held a bouquet of lily of the valley, which symbolises the return of happiness; sweet William, which means gallantry; hyacinth, constancy of love; ivy, fidelity and marriage; and myrtle, love and marriage.

Burton also created the dress for Kate’s younger sister Pippa, 26, who was her maid of honour. It was simple and elegant, made of heavy ivory satin-based crape with the same button detail and lace trims as the bride’s dress.

“It has been the experience of a lifetime to work with Catherine Middleton to create her wedding dress, and I have enjoyed every moment of it,” she said, adding that it had been “such an incredible honour to be asked”.

The dress was the work of skilled workmanship from across Britain, and Burton paid tribute in her design to the Arts and Crafts tradition.

Burton took over as creative director after Alexander Lee McQueen committed suicide in February 2010. The 36-year-old graduate of Central St Martin’s had worked side by side with him for 14 years.

The dress is expected to spawn a thousand reproductions.

Elizabeth Emanuel, who created Diana’s fairytale ivory silk taffeta wedding gown in 1981 with her husband David, is still being asked to make copies.

“There are going to be people watching as she walks down the aisle with their sketch pads, with the machinists and pattern cutters all ready and waiting. By the next morning you’ll see copies in the high street,” she said.