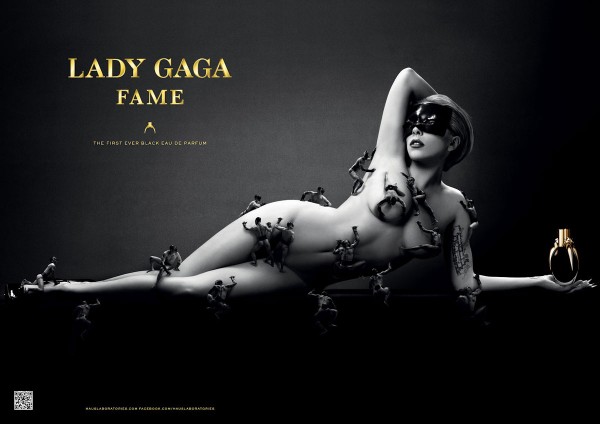 Earlier this week Lady Gaga took to Twitter to unveil the campaign for her fragrance Lady Gaga Fame, which features tiny men crawling all over her naked body.

Shot by US photographer Steven Klein, the ad sees Gaga wearing a black mask and reclining on her side, with what appear to be metal action figures adorning her body.

The singer is releasing two editions of her debut fragrance — an “affordable” small bottle and a larger version dubbed “Le Masterpiece.”

The smaller edition of her upcoming edition will be priced at around $30, while the premier edition of the fragrance will retail for more than $70.

The perfume is set to arrive in stores this September and has been described as the “first ever black eau de parfum.” Although black in the bottle, it sprays clear and becomes invisible once airborne.

It is expected that the campaign will begin running in magazines this September.