World’s biggest sculpture to be built in Abu Dhabi

Abu Dhabi is taking on The Great Pyramid of Giza, with the construction of the world’s biggest sculpture. 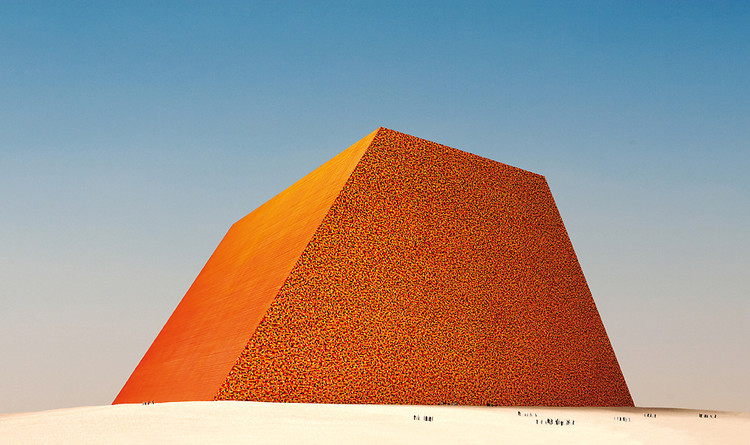 Christo, the legendary public artist famous for his Wrapped Reichstag (below), plans to build the world’s largest sculpture out of oil drums in Abu Dhabi.

“The Mastaba” is a pyramid-like structure made entirely from stacked, painted oil barrels, designed to tower above the sand dunes of the Gulf desert.

It will take 30 months and hundreds of people to build the sculpture, which will be placed 100 miles outside Abu Dhabi in Al Gharbia. The Mastaba, Christo emphasises, is not a reference to Egyptian pyramids, it takes its name from an ancient Arabic geometric form inspired by a resting bench for travellers through the desert.

The trapezoid structure with two vertical walls and two slanting ones, was selected by Christo and his wife for the harmonising effect it would have on the desert landscape.

It is built at a specific angle to catch the light of the sun as it rises, and as each individual barrel will be painted, Christo claims the effect will be that the sun-lit wall will appear “almost full of gold.” Although Christos said the idea for the sculpture was put together more than 30 years ago, conflict in the region prevented the piece from receiving approval.

If completed, the $340 million project will be the largest permanent structure in the world–and the priciest.