Wahyu Adi Santoso proves how even the smallest specks in the universe, can create the most profound reverberations. 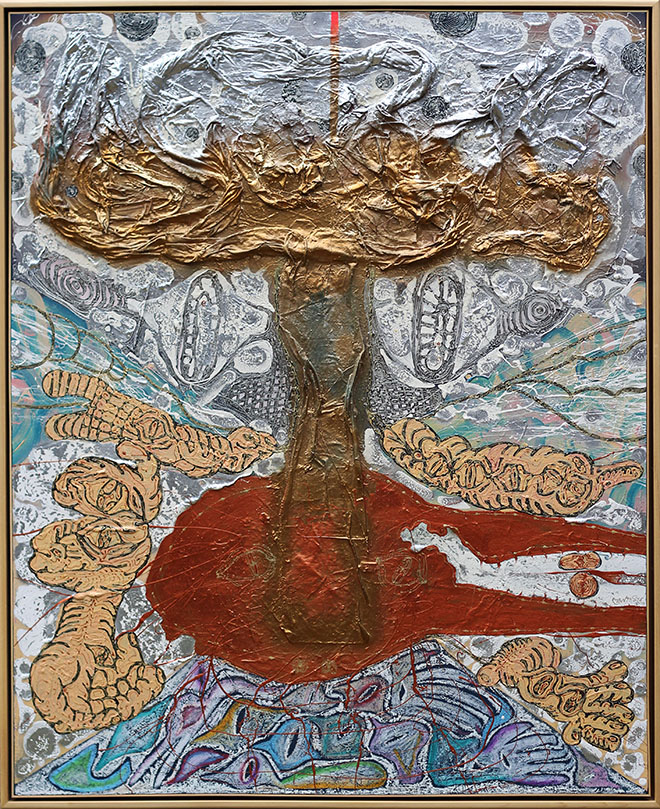 It is to the awareness of 22-year-old Indonesian artist Wahyu Adi Santoso that we are but a speck in the universe, yet his creations stand as a reminder that each speck is capable of bringing out a universe, just as vast, from within. 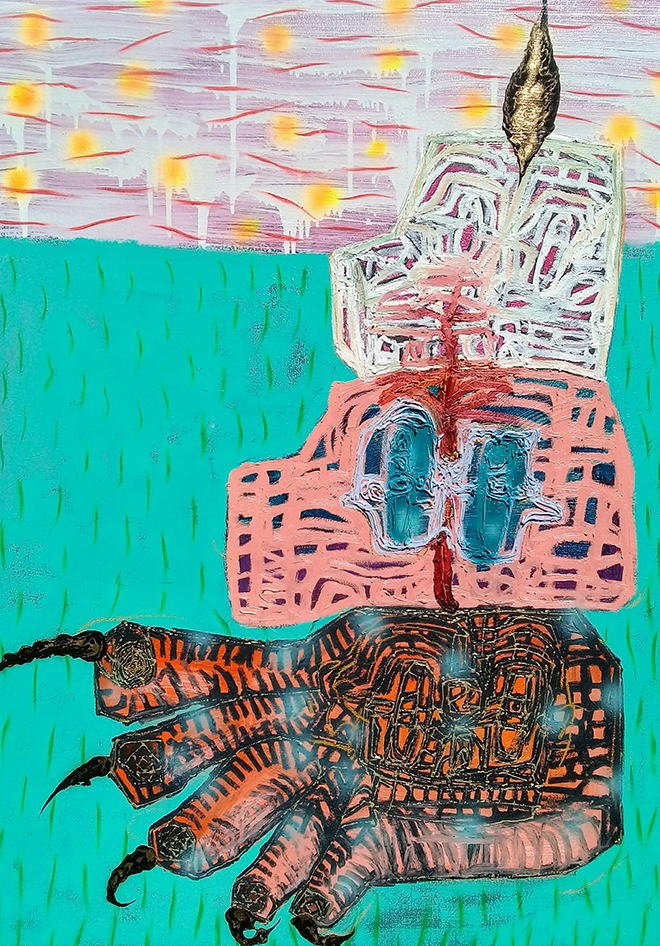 Born in Malang, East Java, Santoso now resides in the art capital of Indonesia where he underwent art education at the Institut Seni Indonesia Yogyakarta (The Indonesian Art Institute Yogyakarta) and became a member of the U Need Studio art collective. Early Indonesian artists promoting abstract expressionism often have slivers of political undertones interlaced within their art, since the style bears bold strokes and vivid colours which do away with any formative representations that the leftist realism heavily depended on. Compelling as it may be to have one’s art bear the notion of anti-regime freedom of creativity, Santoso was emphatic in explaining that his art, unlike his predecessors, was in no way a conduit of any political implications, but rather, a more personal and spiritual one at that. 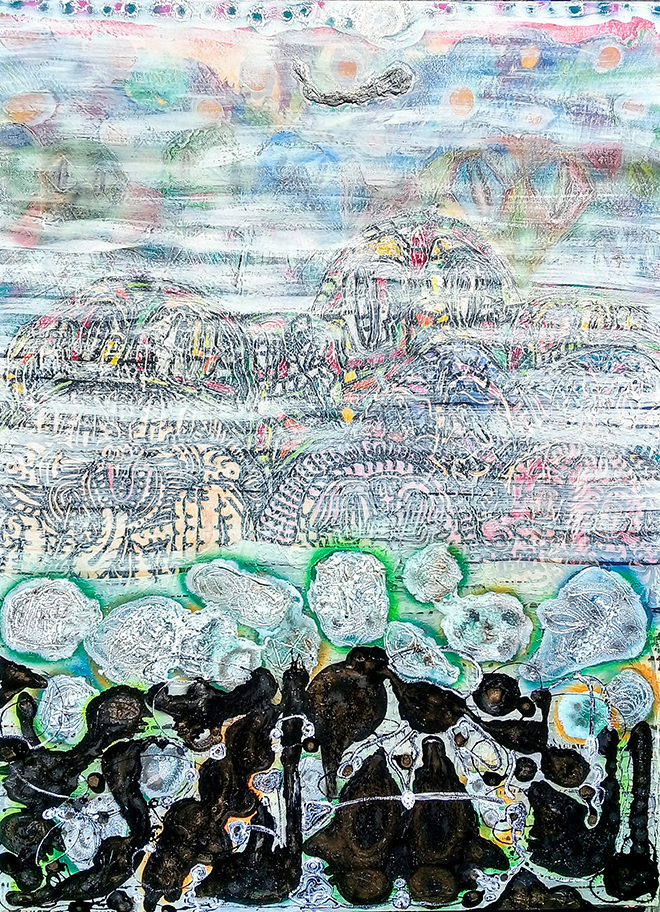 Influenced at a young age by the household names like Picasso and Joan Miró, along with local celebrity artists Heri Dono and Nasirun, it was only natural for Santoso to deviate away from the construction of forms and figures and towards the abstract expressionism style. Even so, he attempts to raise the ante in his works by injecting what he feels most strongly about – textures, in a sort of relief sculpture constructed upon a canvas similar to those found within the ancient Buddhist temples that pepper the island. “These textures bring out a young spirit in me.” Santoso’s conceptualisation involves him blanking out his mind and gazing into the void. He associates this to peering into the vast expanse of the night sky, only to catch the interspersed flickers of starlight. This exploratory phase gradually builds up into a supernova of vibrant hues and textures that Santoso builds upon the canvas. In this way, each piece of work is deemed by him to be recreations of mini universes that came to be through his meditative state of staring into nothingness and, thereafter, generating a “big bang” moment. 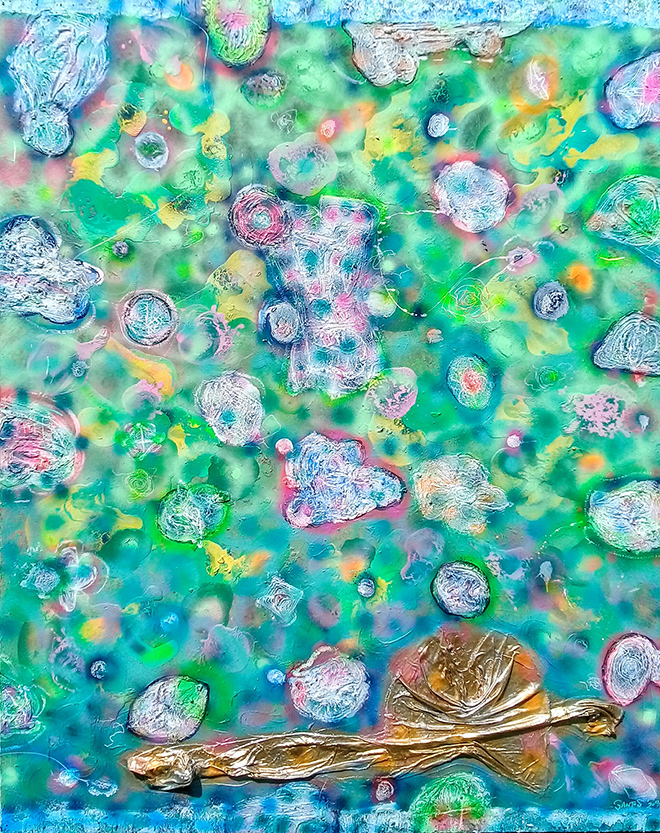 Highlight Star, one of Santoso’s works, is an arrangement of whites upon a melding of blues and greens. To him, knowledge of the universe should remain in balance with knowledge of the self, and with that in-between lies the concept of spirituality. He notes that white dwarf stars, which the white marks on said piece were meant to be, burns the brightest and hottest after exhausting all their nuclear fuel – even more so than the sun. And what better medium to sustain the burning passion of a dying star than the aura of life represented by the blues and greens? In an almost cyclic way, Santoso further explained that these brilliant celestial bodies could potentially be the guiding lights for spirits, or “Life Spirit” as per the words of the artist, as each element flows and channels through one another in yet another universe of Santoso’s creation. 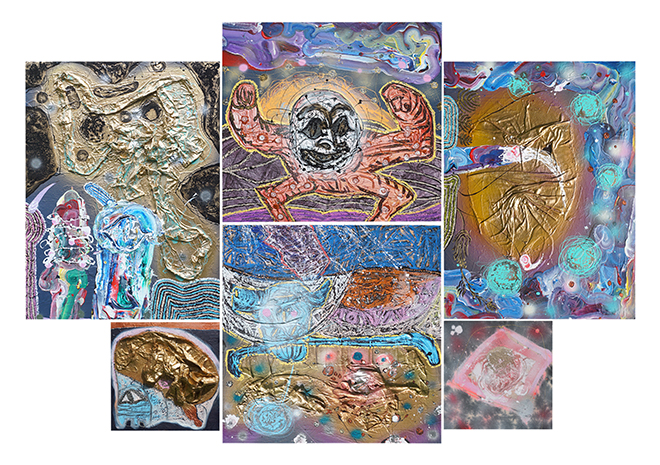 It is apparent that Santoso has a knack for casting the perceptions of his viewers towards the outer realms of spatial awareness, yet in a similar fashion, pulling them inwards into themselves while challenging the individuals to reconsider their own understanding and awareness introspectively. Perhaps it is Santoso’s depth of perception that sets him down the road of a new-age Indonesian artist, and maybe even surpassing is idols as he sets his sights for the galaxies beyond. 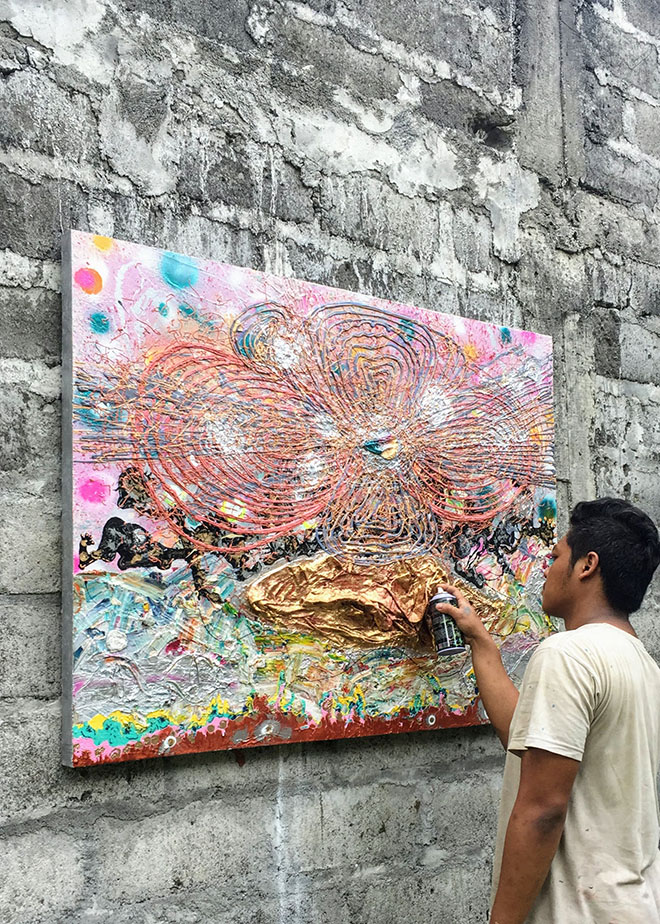