Sanlorenzo have taken their stylish superyachts and added a new twist of excitement. The result is an outstanding Explorer yacht: the 460Exp 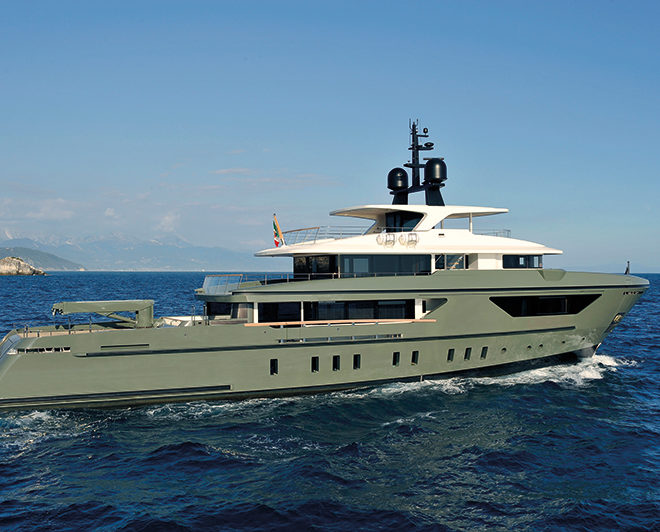 Sanlorenzo’s first Explorer, Moka, was unveiled at the Monaco Yacht Show in 2015. She has just successfully concluded her maiden voyage, a transatlantic ocean journey that brought her to American shores where she was met by her owner. With a successful crossing under her keel, Sanlorenzo is keen to promote this new addition to their superyacht range.

The Explorer superyachts launched by Sanlorenzo are specifically designed to undertake long-range cruising. The fully equipped vessels offer a variety of services and features (and, of course, all the oceangoing superyacht necessities), along with large internal spaces that are so important to an owner intending to cruise for prolonged periods.

Characterized by Sanlorenzo’s unmistakable and distinctive lines, the 460Exp measures up at 42m in length and tips the shipyard scales at 460 gross tons. She has a displacement hull in steel, and an aluminum superstructure inspired by big exploration vessels capable of reaching far flung destinations. Spaciousness on board, safety and self-sufficiency are the three key factors that make this yacht unique, with the aim of the 460Exp bringing back the real meaning of ‘adventure’ for an owner. The design of this superyacht pays great attention to environmental and conservation concerns, and the 460Exp has been classified as “Green Plus” by RINA. ‘Smart design’ allows her to remain at anchor for long periods of time without having to make use of generators – thereby eliminating emissions, vibration and noise. The level of self-sufficiency and cruising stability are notable for a motor yacht of this size, and the boat’s length allows it to be both more agile and more maneuverable when turning, permitting access to confined harbours, ports and docks.

The interior décor was chosen by the owner of the first in the 460Exp line. Like all Sanlorenzos, it is ‘made to measure’, and is perfectly in keeping with the expedition philosophy of the yacht. Wood features strongly, in the most classical shades of mahogany and teak, matched with elegant and timeless furniture, and with intensely coloured leathers by way of accents, creating at the same time a relaxing environment.

The lower deck hosts four large double bed cabins and a wellness room which includes an endless swimming pool, gym, and sauna with a Turkish bath. The room is illuminated by large vertical windows on either side, offering tantalising views of the sea and nature. The lower deck also houses the crew cabins, and the Captain’s cabin is on the main deck, adjacent to the wheelhouse, allowing the Captain to be on hand and ready to supervise operations during long range cruising passages.

The fun factor has not been forgotten. The Sanlorenzo 460Exp can accommodate a huge number of water toys in the large stern area on the lower decks; these include tenders, speed boats and fishing boats up to 9 meters, and other toys such as sailing dinghies, jet skis, Sea Bobs, windsurfers, surfboards and more.

At anchor, and once the large teak deck at the stern is free of toys, the area becomes a large recreational space where guests can enjoy sunbathing, or swim against the current in (another) large and aptly named ‘endless swimming pool.’ The stern area also offers a complete beach club with bar, a sauna, and space for diving operations. The Sanlorenzo 460Exp seems to be bigger inside than out, offering more volume than her size suggests, and less fuel consumption during extended voyages thanks to her two 1,300+ hp engines, giving the yacht a maximum speed of 16kts. With a fuel capacity of 50,000 litres, she can cruise for more than 4,000nm at 11kts without refueling.

Keeping with the Explorer philosophy, the superstructure is located further forward than on conventional yachts, leaving an ample aft deck capable of carrying a tender of dimensions far exceeding what one would expect to find on a yacht this size.

Following hull #1, M/Y Moka, four further units of the 460Exp have been sold and are currently under construction. Diary of an Atlantic Crossing

Straight out of the box: Confident in the ability of the newly-launched vessel, and after extensive sea trials conducted by her new crew together with the relevant technical consultants, the owner called for the SL460Exp to be delivered to the Caribbean immediately. Her maiden voyage was, therefore, a cold and wintry Atlantic crossing. 11 December 2015:
Only a few hours after the delivery celebrations, Moka departed with her Captain and eight member crew from the port of Viareggio, heading for Palma de Mallorca, arriving 13 December after a passage of 500nm through the Tyrrhenian Sea and the Golfe de Lyon.

21 December 2015:
Taking advantage of a break in the weather, Moka departs and arrives two day days later in Gibraltar, the gateway to the Mediterranean. After topping up her fuel tanks, Moka sets sail on the same day into the Atlantic Ocean. The next stop will be in the Canaries. The weather on this leg was not ideal, and Moka experienced severe conditions along the African coast, with beam seas and crosswinds. None of these constituted a problem, and she arrived safely in Santa Cruz de Tenerife on Christmas Day.

25 December 2015:
The yacht makes a stopover in Santa Cruz to refill fuel tanks and load fresh supplies before the longest leg of the journey.

28 December 2015:
Moka departs from Tenerife and sails 2,700nm before reaching her next stop – Saint Martin, half French and half Dutch.

6 January 2016:
The Captain catches a glimpse of the dark landmass of St Martin on the horizon, and Moka has completed the longest leg of her ocean crossing without any fuss at all.

7 January 2016:
Moka sails towards West Palm Beach in Florida. She still has to cover 1,100nm, over a third of the Atlantic crossing, passing the British Virgin Islands and through the channel between Cuba and the Bahamas.

10 January 2016:
Florida’s luxurious city welcomes Moka to her warm waters, after a month at sea covering 5,600nm at an average speed of 12.5kts. Moka does not show any sign of wear and has experienced no serious issues along the way.