Sanctuary Cove Resort is gaining credo in the boat-building industry

Located at the epicentre of Australia’s boat building industry on the Gold Coast, lovely Sanctuary Cove Resort has long been a favourite of exhibitors and visitors alike. This year it returned to pre-GFC (Global Financial Crisis) levels, if not yet to its burgeoning late 90s days, when the event was acclaimed as an import export showcase for the whole Asia-Pacific region.
In recent years, a rival same-dates boat show at nearby Gold Coast Marine Precinct had threatened its viability, splitting the market. This self-termed Gold Coast International Boat Show has folded, however, and visitors from Australia and abroad have returned to the familiar ambiance of Sanctuary Cove’s bar and restaurant-strewn Marine Village in droves. 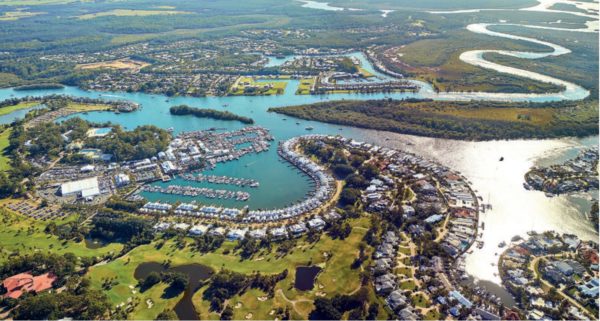 The official count was 45,866 people paying a not-insubstantial entry fee. Due to restricted road entry, that figure has never gone much above 50,000, but the quality of this audience in renowned. Boat owners from near and far turn up for traditional high-end wining and dining between inspections of latest models, many commuting to and from Sanctuary Cove by helicopter, and sales of Australia’s premier Penfolds Grange cabernet-shiraz wine go through
the roof at this time.

Organisers said 2018 was one of the biggest shows of recent times, with 180 boats in-water and 275 on land, along with 300 individual exhibitors including a spectrum of marine accessories makers in huge custom tents.

Local Gold Coast manufacturer Maritimo reported its “best show since pre-GFC, with the team hitting a new SCIBS sales record”. The company’s founder, Bill Barry-Cotter, had been at every one of the 30 shows. This year saw the world premiere of the Maritimo X60 Sport Yacht, which represents the first model in an exciting range to released in coming years. 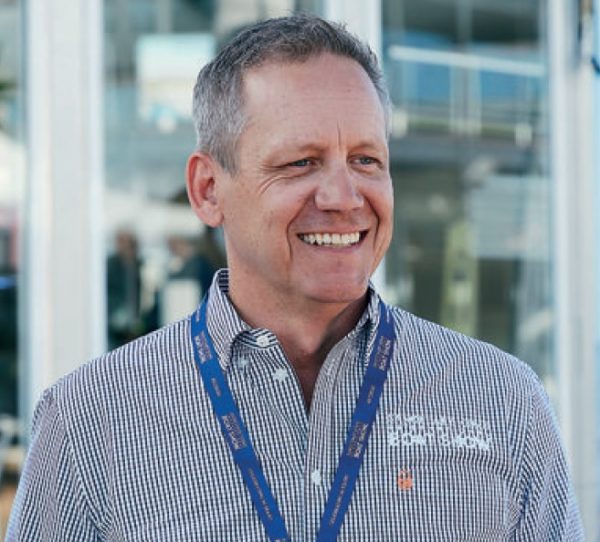 International sales and marketing manager Greg Haines also announced his departure after six years, and CEO Garth Corbitt said his responsibilities would be divided among existing executives, including designer Tom Barry-Cotter, who addressed the media on new Maritimo M51 and S51 models and the latest S70 Sedan Motor Yacht.

Riviera had hitherto played an anchor role in the rival event, but now returned with owner Rodney Longhurst saying response to their 395 and 72 Sports Motor Yacht was overwhelming. “We had at least six people on every model in the seven-boat line-up at 3 pm on last-day Sunday”, he said. “We are happy with the interest, and happy with our sales. It has been great all around”. 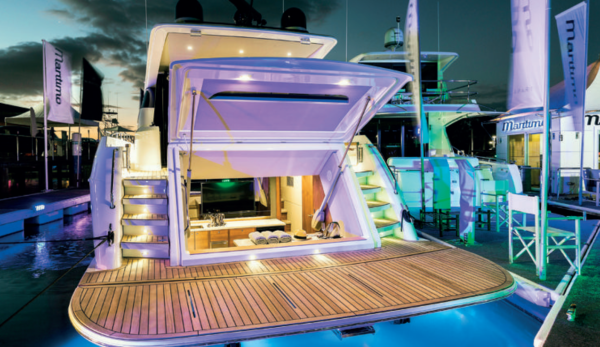 Multihull Solutions again had its long-term pride of place position pay dividends with sales of Fountaine Pajots, Neels and its gradual introduction of the new Iliad power cat models, for which Managing Director Mark Elkington has high hopes, while the Multihull Group also reported three sales of Lagoons.

Horizon Motor Yachts Australia said they sold an E75 model for A$5 million (approx. US$3.7 million) off the back of the model on display, which will be custom-built. Clipper Motor Yachts sold three new Hudson Bay Clippers valued at more than A$2 million (approx. US$1.5 million). Many of the vessels on display at Sanctuary Cove are built in Taiwan or China, although local
production yards like Maritimo and Riviera still dominate.

Todd Holzapfel of Great Southern Marine representing Palm Beach Motor Yachts, now part of the Malaysian-based Grand Banks Group, and also Taiwan’s Ocean Alexander, said “we’ve had plenty of interest and leads across all products. The Ocean Alexander 70 and 85 attracted a lot of extremely positive feedback, and we have a number of sea trials booked”.

And it wasn’t all about boats. Major exhibitor Bentley Brisbane sold six new Lamborghinis and three of the new Bentley Continental GTs making their debut at Sanctuary Cove. Luxury cars have been very prominent in recent years, but the new influx of boats seem to have put the situation back in proper balance.

We had lunch with Peter Mahony of Benetti, who had been speaking at an associated conference, and separately with Andy Stephens of New Zealand-based Maxwell Winches, now part of the Dutch Vetus Group, who discussed their latest custom windlass range. The Queensland Government released an updated report called Queensland Superyacht Strategy 2018-2023, and we were interested to see a further focus on possibilities of chartering or cruising in the Hervey Bay-Bundaberg region at the southern end of the Great Barrier
Reef. An update is scheduled for Yacht Style #44 later this year. Last but not least came a long talk with Domenic Genua of Sydney International Boat Show about providing better superyacht stands, discussed in more detail in the SIBS preview overleaf.