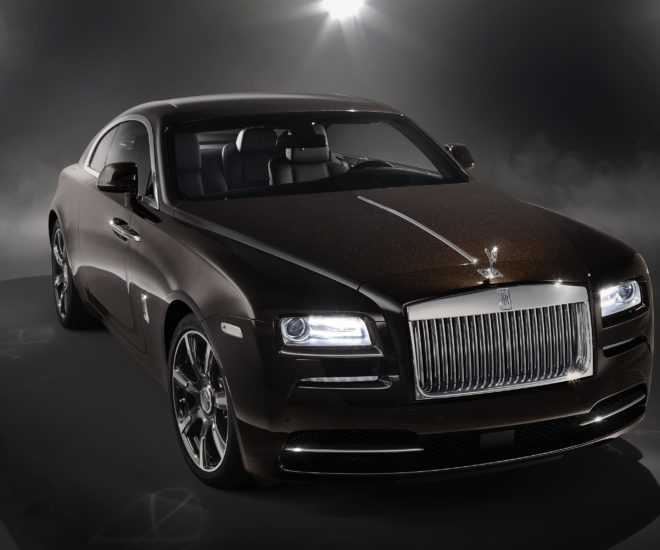 Rolls-Royce has released a musically inspired version of the Wraith coupe appropriately known as the Rolls-Royce Wraith ‘Inspired by Music‘.

The one-off model, based on its GT coupé, was developed to celebrate the marque’s continued role in the mythology of Rock n’ Roll.

For so many aspiring and established musicians, the Rolls-Royce is the vehicular symbol of having made it, and over the past 50 years everyone from John Lennon and Elvis Presley to Noel Gallagher and Kanye West has rolled with a Rolls. To highlight this relationship and in a nod to the finest internal components in a sound system, the company has created a “Lyrical Copper” exterior finish for the car which catches and bends the light differently at different angles thanks to a combination of brushed and polished textures.

The copper theme continues inside with similarly colored door panel inserts and even book-matched copper tone veneers. Interior surfaces have also been treated so that they have a tactile, vinyl record-like feel

However the most impressive element of this car is not what can be seen, rather it’s what can be heard. The Wraith ‘Inspired By Music’ boasts a truly bespoke audio system that took 2 years to develop and which was built from scratch by some of the world’s leading audio engineers working alongside Rolls-Royce craftsmen.

It has 1300W of power and an 18-channel audio system and uses two large bass speakers, seven tweeters and seven mid-range speakers. The sound they generate together is then complemented by two further ‘exciter’ speakers mounted in the car’s headlining closer to ear-level.

The finished aural effect is meant to be as close to experiencing music in a live venue as possible. The company has also employed active noise-canceling technology via microphones that register external sounds and automatically adjust the music to compensate.