Here are the new destinations intrepid travellers can consider adding to the bucket-list and go on a summer escapade, and sail the sea of Anambas Archipelago. The Anambas Islands Archipelago located in Indonesia is now being recognised as a new and attractive South China Sea destination for coastal expeditions, thanks to the massive improvement in facilities. Now yachts can enter and leave the bay at ease. Anambas, a fabled island consisting of a collection of over 200 small Indonesian islands in the South China Sea, is seldom visited but travellers are welcome to enjoy the magificent beauty of what the islands have to offer.

Being part of the Indonesian Riau Islands Province, the Anambas Island group is known to be majestically beautiful and the territory is located about 150 nautical miles northeast of Batam Island in the North Natuna Sea between the Malaysian mainland to the west and the island of Borneo to the east. The islands are situated between Singapore and Borneo, making travelling a lot efficient and easier for Singaporeans. 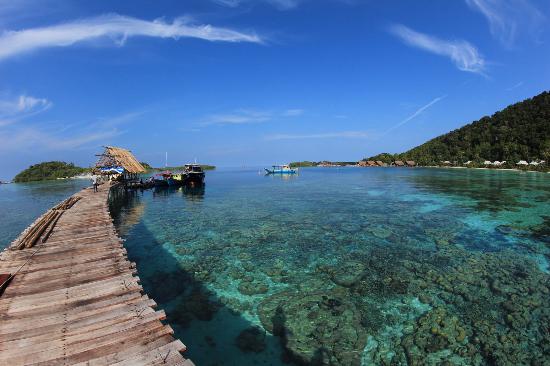 Geographically part of the Tudjuh Archipelago, the Anambas Islands have remained under most yachts’ radar. The silent existence goes far back centuries, never really reaching outside its boundaries. In fact, the Anambas group of islands have drawn wide interests in the past, though it was regarded as a remote off-the-beaten-track place where only the most intrepid travellers would venture.

However in present times, those with yachts and a penchant for exploring new seas and lands are becoming more aware of the Anambas group of islands, known for its idyllic setting with breathtaking sceneries and pristine white sandy beaches and catch the occasional glimpse of coconut palms bowing towards the gorgeous turquoise gin-clear sea. In the past years, yachting activities had been quite challenging for Indonesia due to the immigration rules for yachts. Now, these immigration formalities for arrival can be done via email from any location or country via the yacht owner, captain or agent. The APS agents are aware of the ports that would accept e-forms, and the formalities can be completed before the yacht reaches the Anambas Archipelago. Captain Jean Francois of APS Borneo is one intrepid traveller who is well-verse with the Anambas Islands. In November 2017, he skippered the 80-inch steel schooner of Shaitan of Corsica yacht (now docked at the marina in Batam) and went on a cruising voyage from Borneo to the Anambas Islands.

He reported that yachts can sail directly to Tarempa from Borneo (240 miles) as he recently did, Singapore (150 miles), Tioman, Malaysia (130 miles) and from nearby Indonesian islands, such as Batam. “It’s possible to cruise among the Anambas Islands any time of the year; however, the season of Southwest monsoon (April to September) offers drier conditions and a calmer sea,” said Jean-Francois.

“While most of the predominant winds come from the Southwest or Northeast according to the season. It is advisable to be anchored with the possibility to swing 180 degrees with a switch of wind under a passing cloud (and with reefs normally not too far away),”  Jean-Francois added. It is very rare nowadays to be the first or the most fortunate one to cruise a new destination. But the Anambas Archipelago is one that appears so close from your port yet a remote island to be explored and at its best, and even gaining a deeper insight of one such beautiful Anambas Archipelago.

More information about islands to visit and yacht charter can be found here.