Richard Branson unveiled plans Tuesday to pilot a “flying” mini-submarine down to the furthest depths of the oceans, in his latest record-breaking adventure. The Virgin Oceanic craft will try to reach the deepest points in each of the world’s five oceans, starting with the deepest of them all, in the western Pacific later this year. […] 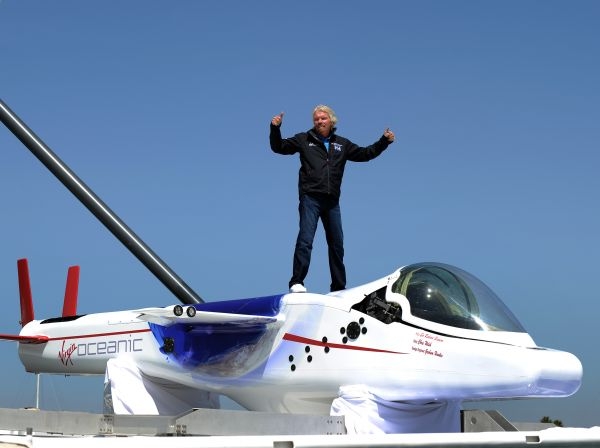 Richard Branson unveiled plans Tuesday to pilot a “flying” mini-submarine down to the furthest depths of the oceans, in his latest record-breaking adventure.

The Virgin Oceanic craft will try to reach the deepest points in each of the world’s five oceans, starting with the deepest of them all, in the western Pacific later this year.

“With space long ago reached by man, and commercial spaceflight tantalizingly close, the last great challenge for humans is to reach and explore the depths of our planet’s oceans,” said Branson.

“More men have been to the moon than have been down further than 20,000 feet,” he told AFP, announcing the Jules Verne, “20,000 Leagues under the Sea”-style project at Newport Harbor, south of Los Angeles.

Branson will share piloting duties with US sailor and explorer Chris Welsh, the chief pilot of the winged, Space Shuttle-shaped submersible, in the five dives planned over the a two-year period.

If plans go well and pressure testing of the mini-sub succeeds, the first will be taken by chief pilot Welsh into the Mariana Trench in the Pacific, which goes down to 36,201 feet (11,033 meters), later in 2011.

Branson, back-up pilot on the first trip, will then pilot the red, white and blue sub to the Atlantic’s Puerto Rico trench — helpfully close to his Necker island home — which has never been explored before at 28,232 feet (8,605 m).

If successful in reaching the bottom of the Mariana Trench, it would be following in the wake of the US Navy’s lumbering bathyscaphe “Trieste,” which got there on January 23, 1960. No one has been back since. The comparatively tiny Virgin sub can “fly” with a “completely unique flying wing” for up to 10 kilometers (six miles) at the bottom of the ocean, and operate autonomously for up to 24 hours, while filming never-seen marine life.

Welsh said the potential risks of the adventure are enormous: to withstand pressures of up to 1,000 times normal atmospheric pressure, the craft is made from 8,000 pounds of carbon fibre and titanium, with a quartz viewing dome.

“No leak is tolerable. A leak would cut through stainless steel or human flesh and mean certain death,” he said. “The depth is beyond the capabilities of any other craft, so rescue is impossible.

“It’s like being on the dark side of the moon,” he added.

Branson — who has coined the term “aquanauts” for those who go below 20,000 feet — was sanguine about the dangers.

“It’s very important if you do adventures that you do think about the worst eventualities that can happen,” he said, saying these included the pressurization system going wrong.

While his deep-sea project is initially in a single-seater craft, he made clear he saw it going the same way as Virgin Galactic, which started small before planning to offer an eight-seater space craft.

“At Virgin we believe that there are thousands of people who’d like to explore the oceans, and become aquanauts,” he said.

The project has a serious scientific aim, Branson stressed, noting that partners include the renowned Scripps Institution of Oceanography which will be among its key science advisors.

“From a scientific point of view, this is akin to discovering the Amazon for the first time. The amount that they’re going to discover down there is incalculable.

Sixty-year-old Branson, who hopes the submarine project will break up to 30 Guinness World records, is well known for his past adventures, including trying to circumnavigate the globe in a balloon.

After starting in the music industry, Branson launched an airline and has since branched into a huge range of businesses, some groundbreaking: his Virgin Galactic project is on track to offer commercial space travel by early 2012.

The Oceanic submarine was originally commissioned by Steve Fossett, Branson’s former adventurer partner, who died in a mysterious plane crash in California in 2007.

“It will be very much in his honor and memory that we’ll make the dives,” Branson said, adding: “We intend to finish what my friend started.”