Making its appearance for the first time in Singapore from 13 December to 14 February 2014 is the Panerai Jupiterium. This device is a planetarium-clock showing the position of the sun, moon and Jupiter with its four satellites, from the viewpoint of an observer from Earth. Specially created as a tribute to Galileo Galilei […] 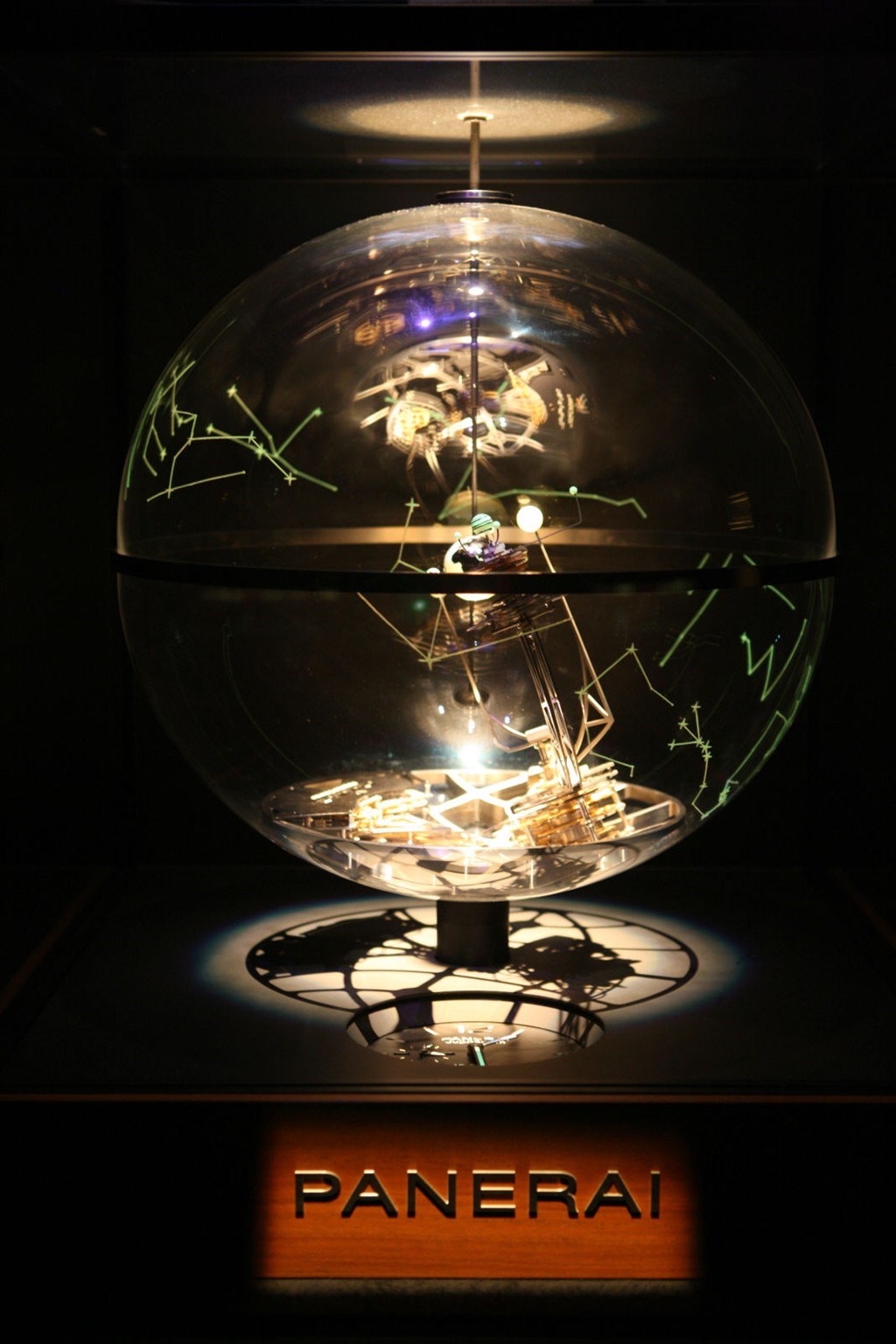 Making its appearance for the first time in Singapore from 13 December to 14 February 2014 is the Panerai Jupiterium. This device is a planetarium-clock showing the position of the sun, moon and Jupiter with its four satellites, from the viewpoint of an observer from Earth. Specially created as a tribute to Galileo Galilei when he first spotted Jupiter’s four satellites in 1610, watch aficionados can appreciate real time movement of the planetarium-clock which reveals the actual positions of Jupiter. Above: The four satellites around Jupiter are represented by rotating orbs

Planets in Orbit
Earth is represented by a glass ball found in the centre of the transparent glass sphere, suspended from the top. The moon, sun and Jupiter are represented by the smaller orbs revolving around the Earth in real time. As for the four satellites around Jupiter, Io, Europa, Callisto and Ganymede, they complete one full revolution in 1.8, 3.6, 7.2 and 16.7 days respectively. Above: The constellations are lined with Super-Luminova to recreate the stars in night skies when the surrounding environment is dark

Night Skies
The glass sphere housing the device represents the celestial skies. It is made up of two semi spheres which make up the northern and southern hemisphere and is joined in the middle by a band (symbolising the equator) engraved with the 12 zodiac signs. The sphere is decorated with Super-Luminova constellations that glow in the dark. Above: The Panerai Jupiterium includes a dial which inherits Panerai’s design DNA

Powered by Panerai
The Panerai Jupiterium is backed up by a 40-day power reserve and its base houses a perpetual calendar mechanism which tells the day, date, month and year with no manual calibration needed until 2100, not even for leap years. The mahogany wooden base which supports the entire planetary system in the glass sphere has a typical black Panerai dial with Arabic indexes at six and 12 o’clock and long stick hour markers and a power reserve indicator. Above: Panerai also set up a Science corner where a replica of Galileo’s telescope with which he made the celestial observation in 1610 is on display

The VIP area was transformed into a mini exhibition area, covered with a black obscuration coating fabric to bring out the illuminated planets and constellations. There is also a Science corner displaying a replica of the telescope used by Galileo as he witnessed his first celestial observations in 1610.

The rare showcase of Panerai’s Jupiterium was first presented in Stockholm, Sweden, in December 2009, followed by Florence, Italy, in September 2010. It then made its way into Asia in May 2011 to Shanghai, followed by Tokyo in June this year.